Posted on 2008-10-19 09:25:39 PM in [OBSOLETE] Disassembling SMAS (SMASH DIZ! Project)Link
There are really only two other people on this planet who know anything about the SMAS world afaik. That would be me and Insectduel. I am very familiar with the SMB1 ASM and have a large portion of its memory map. I'm not much for disassembling due to other projects with the game I'm doing, but I'd be glad to assist in others ways. Just PM me for my AIM name if you're interested. I really prefer AIM over IRC, but if you can't use AIM for some awful reason, then just give me the IRC pass I guess. =/
-SWR
----------

kay, this one was hard to figure out, but it's the box arts for the games on the select screen.
$2D:8000-
$3A:FFFF:The world of SMB3 GFX. It boasts a few other odd things though. Nothing looks like vital data however.
$3D:8000-
$3F:FFFF:A few final GFX for the SMB3 game.
Altogether, that totals for over half the space in the ROM. You may want to reevaluate the division of labor among the game Floating Munchsanio. If you could get ten people, they'd only have to do three banks of pure code. That's a pretty hearty deal!
----------

Posted on 2008-11-18 05:16:18 AM in [OBSOLETE] Disassembling SMAS (SMASH DIZ! Project)Link
For SMB1 and SMB:TLL, $FA-FC is the SNES address of the level data and $FD-$FF is the enemy data. The level address is actually two bytes off because it ignores the header at the beginning of each level. $0750 is the map number.

I'll send you a .smc file with every level available that way you can browse around through stuff.


Originally posted by Ersanio
This info fills up some holes of this document.
If you're going to use that, please remember I sent you a more updated RAM addresses list. Also, the reason objects with a Y-value of %1111 are three bytes are to include other objects like certain castle tiles or upside-down pipes in SMB:TLL. I'll PM you an updated document on it if I still have it.
----------

Posted on 2008-11-20 03:29:42 AM in Applying double digit values to variables.Link
There are quite a few things you'll need to change. First, you should load !RAM and compare to !Coins and use a BCS. That way, you don't need to use two branch instructions for the same thing. Second, you need to store the (Coins - Cost) value back to your coins or it will nullify. Third, unless you immediately switch to another map16 tile or Mario will "pay" for the object several times. Also, you can do up to 256 coins easily. The code is run in hexadecimal mode.
----------

Posted on 2008-11-21 07:28:56 AM in Super Mario Hot WorldLink
Wow, I've never seen a hack from a newbie I actually wanted to play. The palettes look good on the eyes and some levels look pretty fun. My only two complaints on what you have provided are from the following screens: 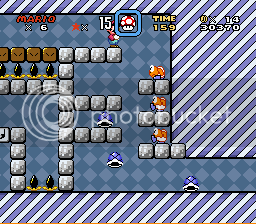 In the first one, I didn't even know there was a Layer 2 spike. I'd suggest altering the BG Palette and the spike palette so it all doesn't look like one big mesh. The FG Palette looks good in my opinion.
In the second one, you suddenly go with these cool colors, make them autumn-colored for a better effect.
Other than those two things, everything looks really good so far.
----------

Posted on 2008-11-24 12:38:33 PM in Is there a custom block that...Link
You cannot create blocks that only exits once and then are gone forever. You'd have to modify the code for one of the standard objects (like Yoshi coins) to accomplish that. This is why there are no reverse switch palace blocks, because the map16 tiles can't be changed via Custom Block ASM. It is however, possible to create a block that won't do anything once collected earlier, but will still exist in the level.
And to the degree of customization you want it, you'd have to fins someone very generous to simply make it for you.
----------

Posted on 2008-11-28 08:06:18 AM in Block Tool - Super Deluxe MAJOR issues....Link
You know what would be helpful? Telling us how you blew shit up rather than expecting us to magically know the answer. The fact that you acknowledge it could be your own fault is nice. Yet, couple it with the fact that you neglect to tell us what you did has me confuzzled.
----------

Posted on 2008-11-29 09:54:50 PM in ASM Question and Block OffsetsLink
You'll need a sprite for the barrel if you want it to move and you'll need LevelASM to only run the slippery code if Mario is on that block. Otherwise, you'll just have the whole level slippery as Mario plays through it.
----------

Today, I turn 19 years old. To celebrate, I am releasing my latest version of FuSoYa's SMB3 Pipes. For anyone who remembers way back, installation was such a pain that there were many alternatives to putting them in. But now with the arrival of xkas.exe, implementation has become no harder than finding an empty spot in your ROM.

Improvements:
-Use of xkas makes patching a breeze. Just find a spot anywhere in your ROM with at least 0x1000 free bytes.
-You can now use any Map16 Page you want, it is not just limited to Page 4.
-I never released v1.3.0, so any bugs you found in v1.2.0 should be gone!
-Anyone wanting to modify their behaviors will have a much easier time doing so. At least somewhat. It's still a very complicated file.
-Support with BlockTool, BTSD, or no other blocks at all!
-Included BAT files make patching all the easier!

There is one catch though ...

wish me a happy 19th and then they're all yours to use!

Posted on 2008-12-04 12:49:42 AM in FuSoYa's SMB3 Pipes v1.4.2 Released!Link
Originally posted by Snowcario
Wow, happy birthday, SWR. I wonder if you remember me? ;) Anyways, will this patch work on a ROM that the old pipes were patched onto? My hack already has the previous version of the pipes installed manually, and I don't want to have to port everything over to a new ROM all over again. (Honestly, I've done too many hex edits that I'd rather not do all over again.)
Just write !DataLocation over where the original spot was. That should do it. But be sure to back it up first just in case. =P
----------