Bobby Prince made a great soundtrack for this PC-DOS game and while I'd love to see it all ported, this fast-paced track is my favourite (at least for what I have in mind for its use).

The YouTube link is to how it sounded on-hardware, but I have provided a archival link that has the music source files from the game as well.

Bobby Prince made a great metal-influenced soundtrack for this PC-DOS platformer/shooter and while I'd love to see it all ported, this particular fast-paced track is my one of my favourites.

YouTube: https://www.youtube.com/watch?v=-74T3bnYsaQ&t=1070s
Source: http://www.vgmpf.com/Wiki/index.php/Duke_Nukem_II_(DOS)
Sampled: If it's feasible without samples that's cool with me, the PC-DOS era wasn't super high-fidelity or anything.

The YouTube link is to how it sounded on hardware of the time, but the other link is to archival/ripped music files (which is in IMF format) from the game as well.

Posted on 2021-01-08 07:30:00 PM in Few Screenshots from my Untitled Second Hack!Link
Last year I released my first hack but the itch to create hasn't stopped so I pretty much started working on a new hack immediately. This second hack doesn't yet have a name or many levels yet and aesthetic-wise I'm focusing on vanilla edits and drawing custom graphics that stick with the vanilla style. Nevertheless, here's a few screenshots of the more complete levels:

- a vertical "green mountain" level that's a bit of a treacherous climb.

- a moody castle full of saws and spikes

- a cave with a "crystal" block that sticks to walls.

- a dank mushroom cave with animated spores and ground tendrils and toxic mushrooms.

There's lots I haven't shared with you all today and there's still lots to do but I'm looking forward to releasing it potentially this year.

Posted on 2021-01-08 07:40:33 PM in Few Screenshots from my Untitled Second Hack!Link
Originally posted by Infinity
When will it be possible to play and what will be the name of your game? A very nice hack

so I have no ideas for a name yet, and it won't be in a playable state (or a state that I'm willing to give to people) for a least few months at least.

Posted on 2021-01-08 08:01:32 PM in Few Screenshots from my Untitled Second Hack!Link
Originally posted by NewPointless
It looks like it has some interesting ASM, very cool

Not that much (yet) actually, but there may be some things down the road.

Posted on 2021-01-08 08:21:12 PM in Few Screenshots from my Untitled Second Hack!Link
Originally posted by edgar
Woah, I saw some of your screenshots recently, how do you merge vanilla graphics so well with others? The palettes are beautiful, can't wait to it release!
Just a question, do you pretend to share the graphics with us later?

I've made several edits to vanilla graphics to "fix" things but to get the "Vanilla+" style I make a copy of a vanilla GFX bin to use as a base for an ExGFX, mainly to preserve tile layout for easy drop-in, and edit it as needed. For example, the mushroom one is an edit of normal ground (GFX14), where I've erased tiles I'll never use (hence all the [x]) edited the vanilla ground and drew new tiles as ideas came for them. 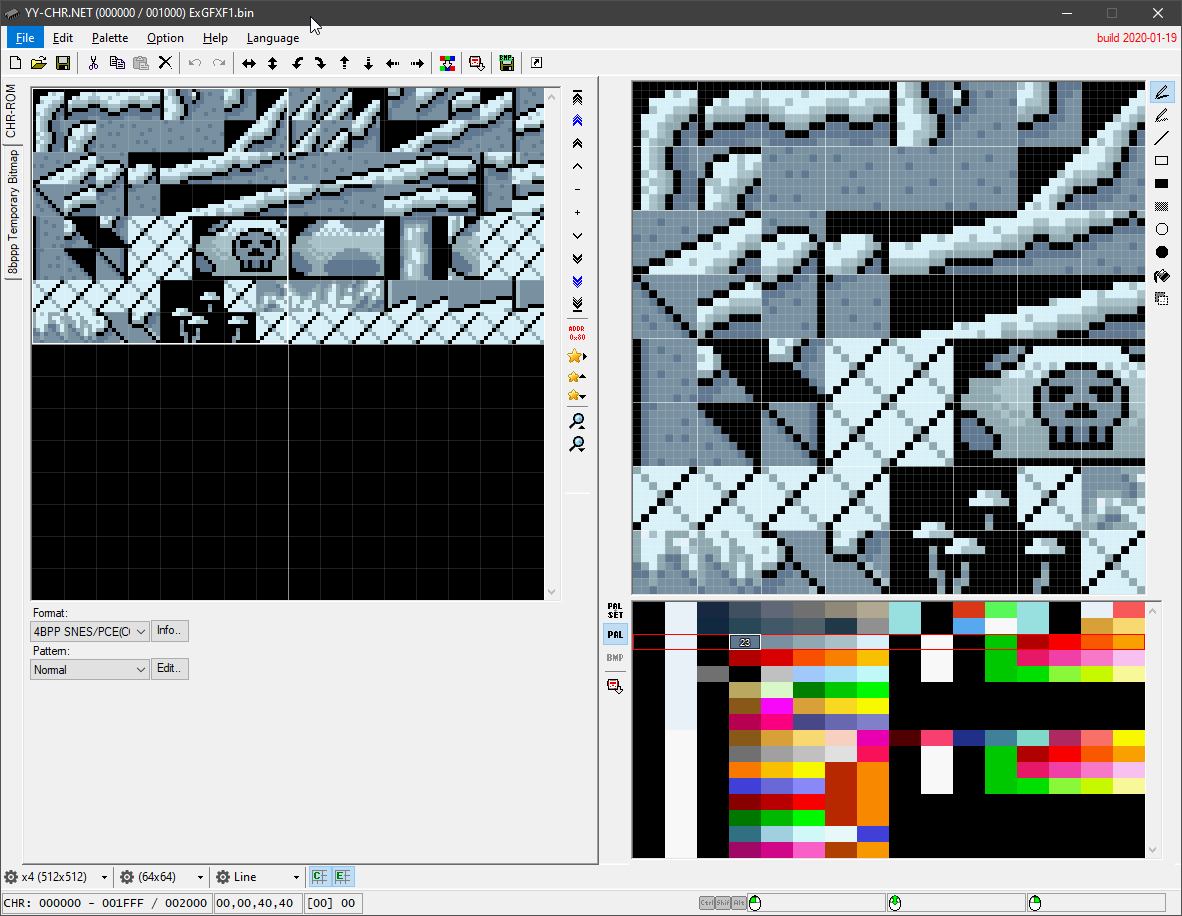 these are all great!

Yeah, this is very far from a pit hack, the tag available for Kaizo just lumps the two genres together.

Posted on 2021-01-10 02:29:26 AM in 🍑 sappho is... charlotte from paradise UXO 🍑Link
It goes without saying that this looks amazing, I am very looking forward to something that shakes up the kaizo scene with aesthetics this strong.

What do you mean by this? Are you asking for the Twitch emoticon at actual 16x16 size or the size of a full background?

02. Slippery Scary Subterranean
What a good port, very ethereal and otherworldly sounding, perhaps it would fit a ghost theme moreso an ice theme but there you go.

03. Dark Clouds
Well made, has a spooky vibe that's well-suited to this ghost cave.

04. FF6Cave
Instills a good amount of dread, if only the level wasn't as tame as it appears and could match that feeling a bit more. ;) Well done.

05. Frost
Good port, gives me some "mountain-climbing in a snowstorm" vibes which is close enough to an ice cave for me.

06. Crooked Ladder
A solid port and has those spooky vibes.

07. Labyrinth Road
Very atmospheric and almost industrial sounding, would be suited to a haunted factory perhaps. The guitar(?) in the second half is a bit strange though.

08. MinishFlames
Definitely evokes a sense of danger you'd have in a lava cave, but the port is rather short and gets repetitive.

09. Mega Man X4 - Magma Dragoon
This is quite energetic for the slow pace of the skull raft level, but that's Mega Man for you. Good port though.

10. Echoes on the Ice
Not a bad port, the song takes awhile to build and sometimes drops into near-silence meaning there's frequently points where it'd be just game audio. Unsure if it's suited to level music.

11. Romancing SaGa 2 - Heartful Tears
This port is quite a moody for an ice cave, and some of the samples are a bit loud which I found made them piercing.

12. Floe
The drum track was all I could hear, which undermined this otherwise solid port quite a bit.

13. Volcano's Heart
This port has a climatic feeling that doesn't quite fit this simple cave level, the drums are a bit overbearing.

14. Stay Frosty
I found a lot of the samples just didn't quite go together and it made the port feel a bit all over the place.

15. Busy Flare
Doesn't quite fit this slow-paced level and I found the instrumentation a bit, well, busy.

16. Lava Stage
The bass line is a lot to listen to on repeat, gave me NES Castlevania vibes, which feels a bit simplistic.

17. 180-60hoSPC
This is quite high energy for a slow skull raft volcano and some instruments felt blaring. Didn't vibe with me.