I used to go by the name ThatOneNetBattler a very long time ago. Heads up: I very rarely update this bio.

Hello there! My name is LucasRCD and I'm a (somewhat) regular user, to no one's surprise. I'm not as active as I used to be; I'm mainly posting on the Forum Games subforum nowadays. I'm working on many things: A forum game, a hack, a potential fangame, alongside other things except not really, I basically post a few times within a couple of days, then go back to hibernating. Don't get your hopes up when you see me active, I mostly lurk anyway.

I may not have made or released anything meaningful on my own, but I have participated in collaborative projects, most recent being Super Sauce Search.

I'm a rookie pixel artist who's always looking for feedback. You'll see me occasionally posting my art in the #showoff channel of the SMWC Discord server or you would, if I were still in there; for personal reasons, I don't see myself returning, or at least staying after doing so. Or maybe I will, it's complicated.

I like creating my own characters, who always have weird names. The first one I've ever made? Variable Y, a robot who can control both light and darkness, with a dark green body, light green plasma hair, and a "face plate" designed to resemble the letter Y. You'll often see me using him as my online avatar. As the piece of furry trash that I am nowadays however, you'll most likely see me using Agwabii, my sona, who's a pudgy cockatoo wearing pink armor. People just deem fursonas as more welcoming than robosonas, I guess.

Awesome layout that was made by Erik557 during C3 Winter 2016.
This is a link.
Code
Originally posted by a nameless bartender
Well we dont say that interanera closing tie
Test

This is a link.
Code
Originally posted by fake quote
This is a quote
Formerly known as ThatOneNetBattler.

I'll keep this here just in case
Layout by RanAS

I love the Mega Man Battle Network series, if you couldn't tell by just looking at my layouts.
ROM Hacking Contests 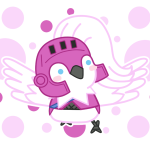 Last seen: 20 minutes and 59 seconds ago