I mean, you already got enough stuff like Levels to make on SMW Yahoo

Edit: my last world was bowser's world where i stoped, i just didn't really like my hack anymore

Cascade 2016-06-24 10:56:35 PM Link
Overall, this a pretty nice, creative hack. The graphical edits, ranging from the Bob-omb sprites to Mario winking at the end of the level, lend the hack a lot of charm. I will admit I don't really like the sharp cornered grass tiles, though. The level design throughout is solid, although it felt a bit less creative in world 2. The balloon level was fun, but it should have been twice as long with a midway point. The second castle was also too short, imo, and felt less inspired than the first castle. The buzzy beetle boss was very good, though I suggest adding a shell or throw block generator so the player doesn't have to die if they run out of blocks to throw.

The overworld maps are simple, yet nice looking, and are as linear as possible. Linearity isn't a bad thing, of course, and this hack throughout is very linear, with no secret exits whatsoever. A few levels, namely Dark Pyramid, do have branching paths, though.

I found a few issues that would cause a mod to reject this hack, so you should fix them and submit an update as soon as possible. 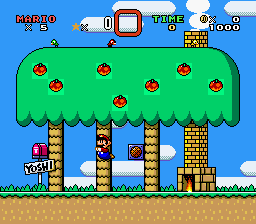 The trees in Yoshi's House act like water tiles for some reason. And the berry tiles don't match the canopy. 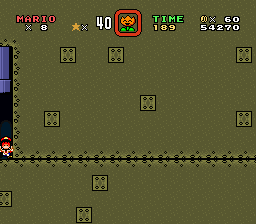 I doubt your hack would be rejected for this, but in the segments with auto-scrolling, Mario can be crushed because the scrolling doesn't stop on the screen with the door or pipe. 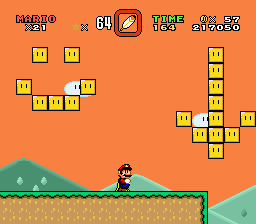 Your demo doesn't have a proper ending level. It can really be something as simple as a one-screen, side exit enabled level called End of Demo. As it is, you have a modified Test level edit called Morton's Plains #2. If you enter the level, you have no choice but to die.