SirMystic 2020-10-04 03:57:22 AM Link
As with some collab hacks, some levels are going to be great while others are going to lack. Unfortunately, there are more good than bad here. While there are interesting level design decisions and fun levels, most of the hack consists of slightly unfair, at times terrible levels with more than half the bosses being unfun, unfiar, and slightly jank. Some good moments, but not enough to save face. 3/5.

MercuryPenny Author 2019-01-14 05:58:17 AM Link
i helped make this but it's stewed for around 9 months before i actually played the whole finished product, start to finish so i think its ok if i review it

the hack's levels are pretty hit-or-miss overall. there are some jams (autumn in jungles, bowser's personal garden, football caverns) but some are frustrating (smashing sands, dark desert night, munchy business, basically all of the void), some are a little on the bland side (abandoned crypt, plutonic chasm), and leafy lakitus is both depending on how you play it. i think overall it's a pretty solid "meh"

by FAR the most inconsistent area is the music. some of the picks are super fitting and absolute jams, others are unfitting mediocre ports from 2012. part of this is my fault, had god knows how long to clean up the soundtrack and replace unfitting music but just never paid it much mind.

i think the hack is pretty solid in terms of visuals but it does have slip-ups. buggy hdma on the status bar in 3-9, and a small handful of levels that are pretty plain-looking and desaturated. others use ugly 1-tile-wide ground. but i think overall it's pretty serviceable. maps are linear, but it's a collab hack so i can see how you'd want to encourage players to play every level. they look good regardless and in the end, isn't that what all overworld maps strive to do? (probably not)

oh yeah, probs my least favorite part of the hack is the bosses. world 1 lacks a boss altogether, world 2's is pretty decent aside from the falling rock attack after you hit it twice, world 3's is basically impossible without savestates (and i had to reload one last time because the sound crashed when i killed it), and the last one starts off pretty good with some great spectacle but then just becomes...frustrating. this aspect of the game probably should have had more dev time but i'll live with it.

it's definitely a collab hack with all the hurdles and inconsistencies included. it's a little on the buggy side and has some other, game-design related issues but if you're willing to put up with some nonsense it's a pretty good time.

jiggity gonk 2018-07-05 08:10:54 PM Link
Great levels in world 1, my favorites being Bone Voyage and The Bone Zone. The rest of the worlds lack quality and are not very interesting to play. 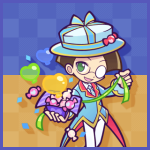 Noivern 2018-04-27 10:47:16 PM Link
NOTE: Erik gave me a patch with some bugfixes, which was moderated in lieu of the submission link. I've edited the bugfix patch into the submission.


This hack suffers from a lot of polish issues, mostly concentrated in the first two worlds, including but not limited to:

From a level design perspective, the hack starts off good but gets gradually worse until Leafy Lakitus (easily my my least favorite level), then picks back up again with a great last world. 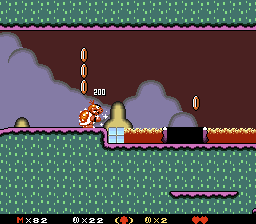 ^ Are those default map16 tiles normal? 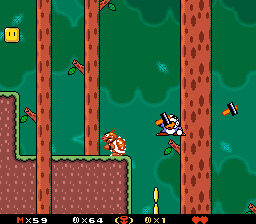 ^ While playing on 3-1, i've seen some sprites disappearing and apearing too fast, i tried my best and i took this image. 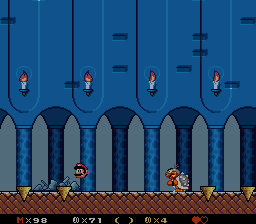 kaitri 2018-04-01 01:18:17 PM Link
the first thing i'd like to say is that i think the hack goes from hard to very hard
and that this was the last hack i played on zsnes AND that you can not finish it on zsnes. the final battle breaks and you are stuck.
about that one overworld bug i already commentated.

some areas where youre supposed to trigger a vine block with a koopa (mainly the final castle, 3rd door) you can get stuck if you kill the koopa. there are only 1-2 koopas around and if you kill both you are stuck.

the hack itself was really nice. i like the idea of playing "a bad guy" because you basically start in the last world, bowsers castle and lava levels and you go the opposite way to what is technically "marios 1. world" if he'd do the journey.

the autoscroller levels are a bit unforgiving. usually you have to stay at the right side of the screen and avoid obstacles right as they appear or you end up in a spot where an enemy will most likely hit you. its almost impossible to do the autoscrollers first try.

some levels with a foreground overdo it a bit. "leafy lakitus" is the best example for this. at the end theres so much foreground, its almost impossible to see. and either im too stupid or i just found no way that tells you where holes are.

music from donkey kong country, lufia 2 and other games that have well known tracks are included, the music is really nice.

i enjoyed playing the hack but it was a bit unfair at parts.
too many autoscrollers, potencial for softlocks, unfair levels.
it doesnt happen a lot but it does happen.

i feel like 3* fits this one pretty well.
i do recommend it if you look for something that reminds of kaizo, without being kaizo. it is a challenge, but it was enjoyable.


edit: it posted my comment 4 times no idea why. i deleted the 3 copies and hope its just one now.

Kiatus 2018-03-31 12:17:17 AM Link
When the P-switch music is playing and you die, it doesnt change to the death jingle.
Also, kaitri, you can unlock the game with some hex editor or simply use this patch.

also not really a bug but a bit annoying. when morton is considered small mario, his model is still the same as for big morton. just the hitbox is smaller. its a bit annoying.

the rom cannot be opened via lunar magic. i dont like that at all. i like to look into LM. i do it with every hack i finish.