Ppnotbig 2021-01-22 03:50:50 AM Link
Green jerry i challenge thou to make your first kaizo! Maybe for monty mole 5 for the final one i really like the series lol its cute. Keep it up bro and take of yourself

-got exactly what I wanted out of this, a fun, short game where I play Monty Mole in SMW levels.
-Seeing monty spinjump is way cuter than it has any right to be!

-I like the idea of you saving a friend a lot more than saving a damsel.
-No seriously, the spinjump really makes me smile! It's adorable!

-Every single level I played was satisfying at worst, and extremely fun at best.
-The SMB2 type boss was fun.

The bad:
-Ok, I'm guessing that you don't move as fast because the idea is that you move as fast as monty mole moves in SMW. I can understand the appeal of this, but eh...it just makes the levels feel like they're a lot longer than they actually are, and makes them a bit repetitive. Ah well, I got used to it eventually.

The nitpicky:
-I would have preferred it if instead of the last boss being dead in...I think 2 hits, you could have given him a few more hit points, and maybe given us a little more time to enjoy kicking his crabby booty!

-Man, where is that castle music from? I know I heard it from somewhere, but where?
5 stars for you, Green Jerry!

Green Jerry Author 2019-05-09 05:44:57 PM Link
Warning!
In the bonus game you can get a cape, resulting in Monty looking glitchy. It's because I didn't remap the player's tilemap. I didn't want a cape to be obtainable in this hack.

As always, graphics are done with care, and the Monty Mole sprite is always funny =]

Maybe you should just put some Dragon Coins and a slightly different sprite for distinguishing small Monty Mole from Super Monty Mole ? 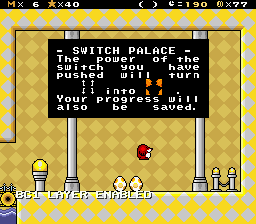 you should fix that, anyways, i loved your level design

edit: thank you for fixing the glitch