LouisDoucet 2021-07-27 07:18:01 AM Link
I'm gonna be honest: I don't really see why this fell under Kaizo: Hard. While it's inspired by obstacles originally found in many popular Kaizo: Hard works from various authors, as is the main 100 room hack, this was clearly designed to be clearable from a real time perspective. It is definitely unbalanced in difficulty, with the fourth room being especially tough and unforgiving, but I found that it was still clearable without any tool assistance whatsoever, though it took a lot of time and effort.
As for arguments about the style: Despite utilising obstacles commonly seen in Kaizo: Hard, the design and structure of the rooms themselves is incredibly linear, clearly suggests the intended approach to the obstacles, and basically removes all puzzly and confusing elements seen in popular Kaizo: Hard hacks, instead providing the player with a clear string of obstacles, focussed purely on execution.

Neither intent, difficulty, nor style, at least in my eyes, points towards this hack actually being a Kaizo: Hard hack. So I ask, what exactly determines if a hack is Kaizo: Hard? If no one other than the author has come forward with a clear, does that count as reason enough? In that case, if a clear comes up later, does that rebut the moderation points that led to it being placed in Kaizo: Hard?
I really hope there is some sort of clear answer that the moderation team can come to a consensus on and make clear to the community, because it really isn't clear right now with the site itself even providing different definitions depending on where you look. I don't wish to start an argument with this comment, or for anyone to feel as though they are being attacked or blamed, but I do want to bring attention to this problem, and I hope that there can be a simple, clear answer to it in the near future.

I would recommend this hack to those who are truly serious about challenging themselves. Most players would probably want to make use of tools for the fourth room, as it is vastly higher in difficulty, though I am sure there are others who could clear it in real time as well. I truly enjoyed the experience, as the most challenging grind I have endured to date. 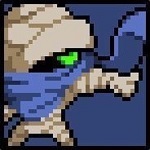 DJLocks 2021-07-02 10:22:56 AM Link
Just tooled through it last night and it was really fun, albeit a little easy for kaizo:hard standards (should have deleted the midways