Last seen: 19 minutes and 41 seconds ago

Posted on 2020-04-27 05:14:15 AMLink
Next time he may try to take part in this but above all he congratulates HausPanthr, Sweetdude, KevinM, snoruntpyro and for up to 10th place! 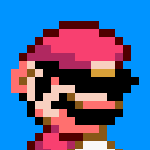 Congratulations to the winners!' ...Let's a go

From: ur mom's house

Last seen: 12 minutes and 16 seconds ago

Posted on 2020-04-30 07:00:10 AMLink
5th place is not that bad. thanks to my partner medic for fulfilling my evil desires through the power of asm - this level would be nothing without him.

I'd like to thank Doctor No for being an excellent host to this contest, being very involved with the community during its entire duration, and always being open for feedback!
Also, of course, thanks to all the judges for enduring hours of playing all these levels, that's certainly no easy task!

As for the judges' feedback, i think they were fair, and there were some i already expected from what i saw from them playing my level on judging streams.
I took a few decisions in making this level that kinda led to some of these issues they mentioned, and in the end this was a learning experience more than anything, as this was my first attempt at making kaizo after all.

Some of these decisions included:
- Staying true to the 2 levels that inspired my entry (Kaizo Mario World's "Ultra Star" and Banzai Mario World's "Mario's Jump 2.0") while still adding my own twist and design style into it.
- Deciding for no usage of Message Boxes or indicators in the level, instead trying to guide the player organically by trying to make the setups intuitive.

And now, like i always do, i'll answer some of the judges comments: