First, I did some little progress for my Hack, not a big step because I did a long pause. I added some HDMA effects and I created a team for this Hack, composed by me, Dark Prince and RussianManSMWC.

it still an early developpement hack, you may encounter glitches, unterminated levels and cutoffs.

There is importants things to say about some glitches :

In the level called Flandre Industries, you have a vertical autoscroll room. If you enter in the door at the end of this part, yoh may be send on the overworld and encounter graphics glitches.

In another level called Security Gate, you have a vertical room part. If you touch a semi-solid or pass-trough block, you'll be also send to the Overworld with graphical glitches.

If you know what causes the problem and how to solve it, thanks for answering in the comments

Except that, you can try all the levels without problems.
You can use the pipe on Yoshi's Island to get access to all levels.
Epilepsy Warning : If you are epileptic, Don't go in the AbStRaCt World!

Also, do you want MSU-1 in my hack? You can vote if you want! 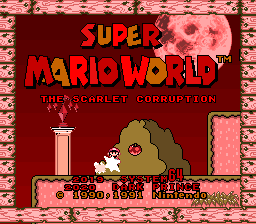 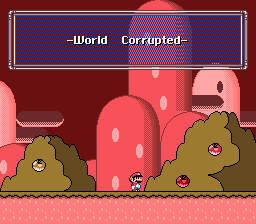 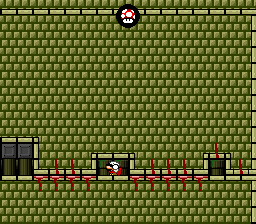 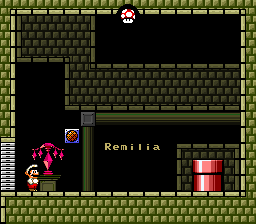 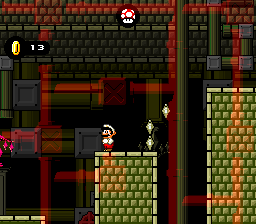 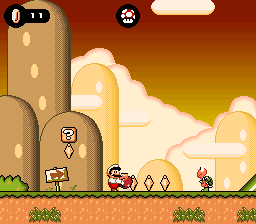 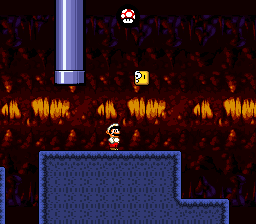 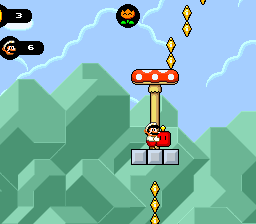 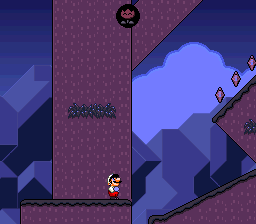 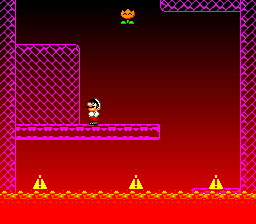 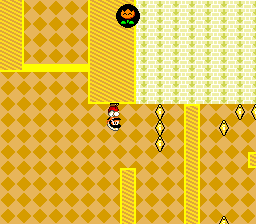 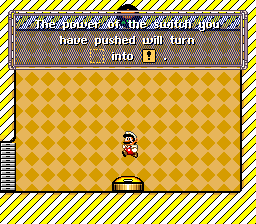 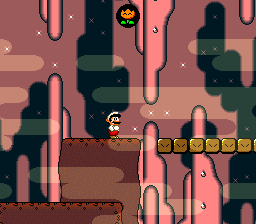 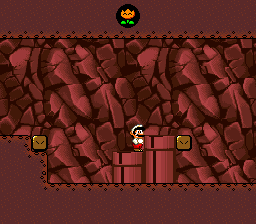 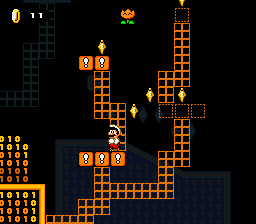 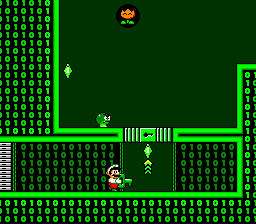 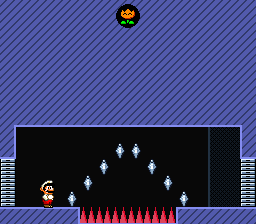 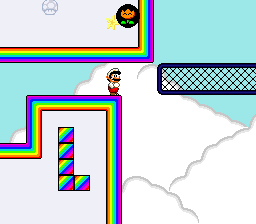 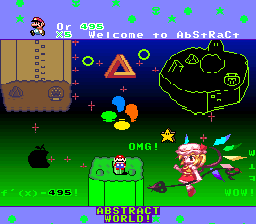 Now, I'll tell you more about my game.
I'm developping a platformer game on GameMaker Studio 2. This game will take inspiration from games likes VVVVVV, Sonic, Touhou Project and especially, Super Mario World and its hacks! they give me a lot inspiration for level design and gimmicks!

Cubby Crazes helps me as a second programmer (I'm the main programmer) and especially for Music.
Here's one from him:

And now, some screenshots of the game, please note it's in an early developpement state and some things will change (I'll add an HUD, change the Room system, ...). 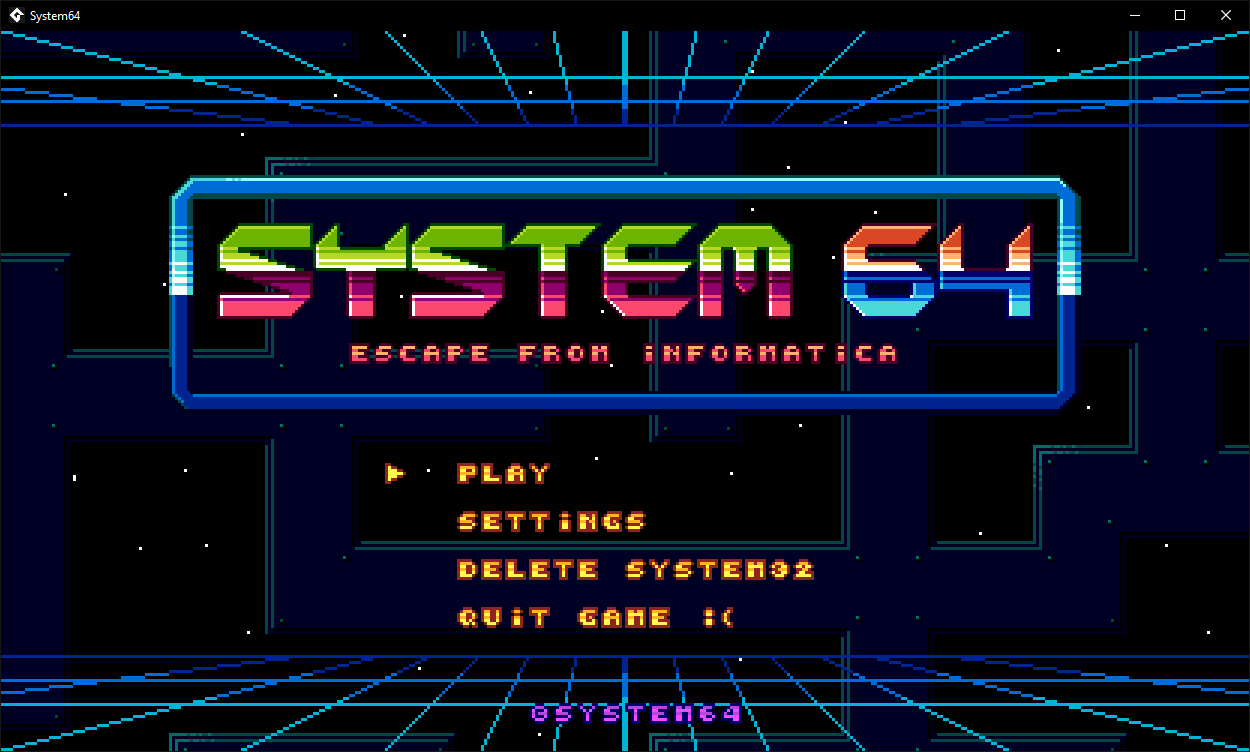 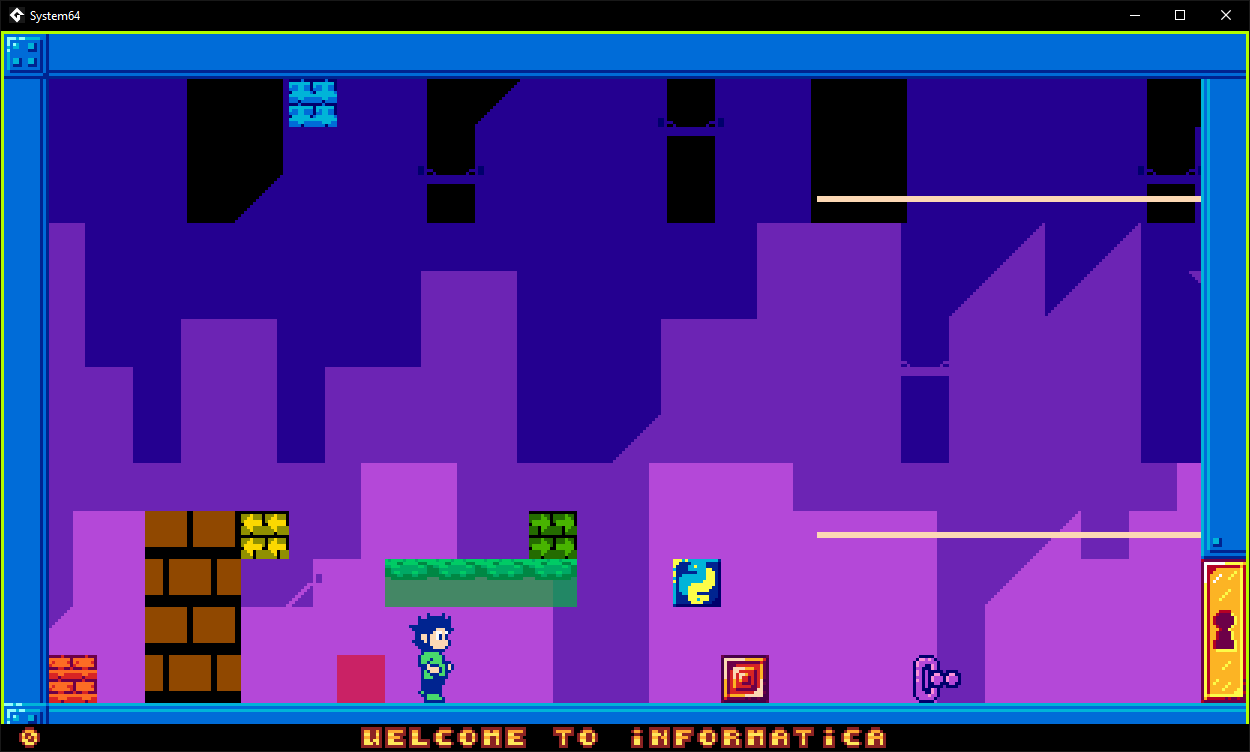 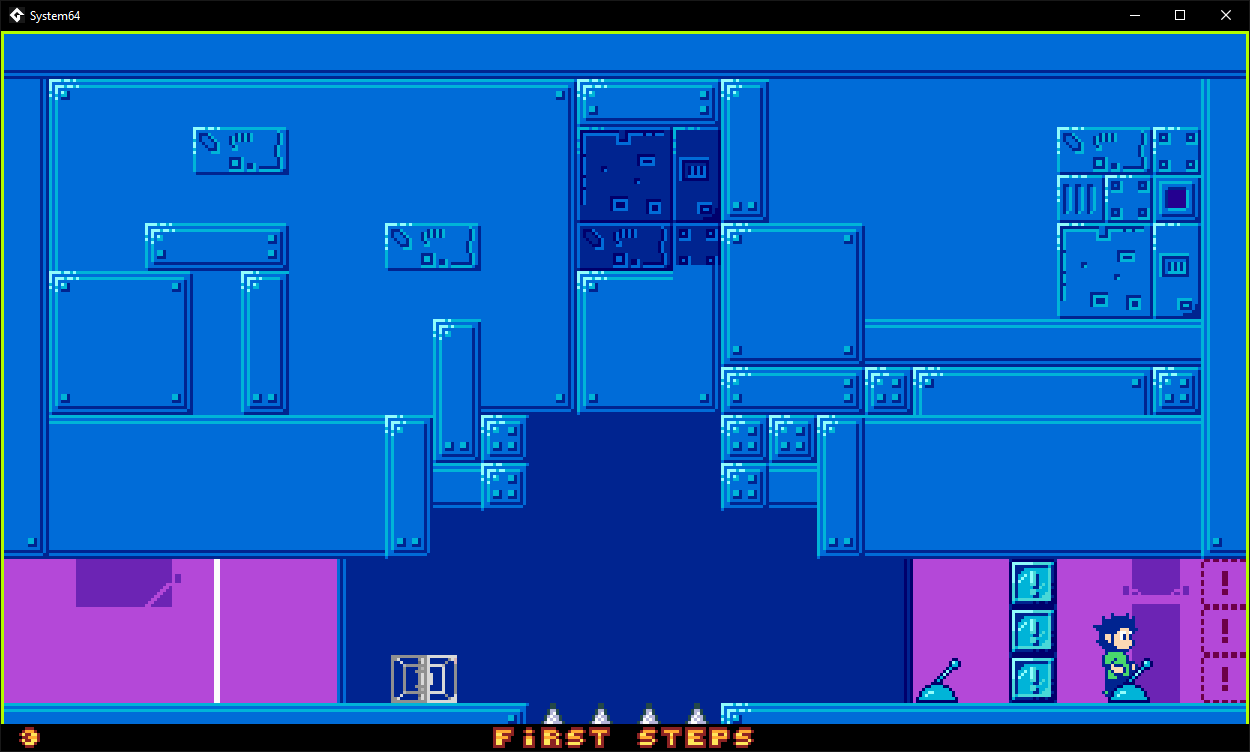 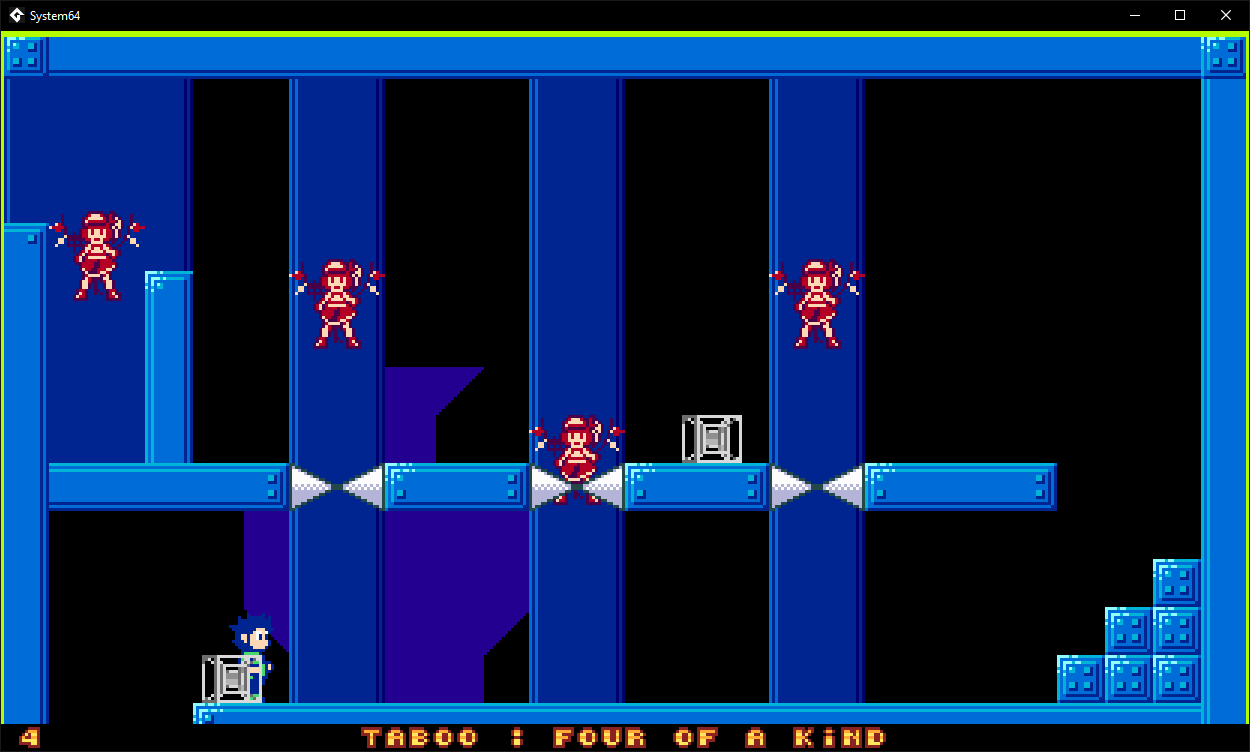 For the story, the main character, System64, was trapped into a virtual world called Informatica and has to escape from it.

I'm developping this game when I'm motivated. Sometimes, I'm fast, sometimes I'm slower or I do some pauses.

This game uses the Genesis / MegaDrive color palette
there is, for this game, 8 palettes of 4 colors for Tiles and 4 palettes of 8 colors for Sprites. I took inspiration from SNES' Mode Zero.
I won't publish a demo now because it's not playable for the moment.
But, BUT... I want to provide multiple versions of the same soundtrack and Modding! I'll try to do that if I can. And sure, I'll allow fans creations Because fan works motivates me to continue doing games! Fans can also do incredibles things too.

Finally, I have a DeviantArt where I publish my Pixel Arts. You can have a look if you want :
https://www.deviantart.com/system64pixelartist/
I'll post more content in the future.

I hope you appreciate what I did for this C3.

Feedback is highly appreciated, even if it's negative. But if you want to do a negative critic, please be constructive.
I'm Flandre Scarlet!.
Last edited on 2020-07-23 07:00:53 PM by Noivern

Hello I'ts a Me Kirbo.

Posted on 2020-07-06 11:07:05 AMLink
I like the intro screen of your System64 game a lot. And one can clearly see that you got some inspiration from a few other games.
I hope this turns out well and having a collab on your SMW hack sounds like a good idea too. Keep it up!

My game also use the colors of the Genesis / MegaDrive palette. There is also a CRT Scanlines filter. It doesn't appears here because I have a bug with the shader, it will be fixed in the future.

On the other screens, you can see I took inspiration from VVVVVV (The room system and the lines that inverts gravity), Super Mario Galaxy (Gravity walls), Mario in general and Touhou Project.


If someone wants to join the collab, don't hesitate to DM me if you're good with ASM, A E S T H E T I C S or levels.
As I said, feedback can help us a lot too.

Also, it's my first collab (and hack), so, if you have some advices to make the collab working better, it's a good thing.
I'm Flandre Scarlet!.

Posted on 2020-07-06 07:09:00 PMLink
Another interesting thread I kind of missed. I'm always interested in seeing fellow SMW hackers share their game deve projects, and this is no exception. While a lot of it still looks ver placeholdery, I do enjoy the overall aesthetic of it apparently being cyberspace-themed or something along those lines. Always an aesthetic I enjoy.

On that note, regarding the hack, I also really enjoy the aesthetic of that "binary" level. Not sure what eles to call that, but as I said, I really enjoy this kind of level theme, so I like what I am seeing here.Feel free to visit my website/blog - it's updated rarely, but it looks pretty cool!

Posted on 2020-07-06 08:36:35 PMLink
I'm surprised these aren't getting more attention. There seems to be a lot of heart and work put into them. I'll be definitely looking forward to them. Great work!

I'm developping this hack and this game by passion because since my adolescence, I want to create my own video game and I love platformers a lot! I grew up with that! I started to play games on the PS2 and PC.

The other reason I'm doing that by passion is money isn't the most important for me. I prefer to have a creative community than being rich. That's my opinion.
I'm Flandre Scarlet!.

If you're interested and if you use Aseprite as a Pixel Art software, I made an accurate Genesis / MegaDrive palette, so, you can do accurate Genesis or PC-Engine style Pixel Art. This palette contains all 512 colors.

For that, I downloaded a 9-bits calculated palette from Wikipedia. The problem was the palette wasn't accurate.

please note it's the brightened version. If you're interested, I can do the normal version and the shadowed version.

Last seen: 6 months and 5 days ago

Also I love that genesis palette. It'll be sure to come in handy!!!

Now when you gave me this idea, it should fit very well in the hack! Especially It's a Touhou-themed hack!

And yeah, that's why I released this palette : it can be useful for people!
I'm Flandre Scarlet!.