Originally all I wanted to do was just release a small patch for Hunter's Revenge ReVised and call it that, or maybe even release Huntre and Scorpion's Bet: Scorpion's Search, but since one of those is still in the works and the other isn't grand enough, I decided against it, especially considering that I've been giving huge thought to doing a full reboot of the TD4C franchise. No more Mario, no more Sonic, no more Mushroom Kingdom, etc. These may be Super Mario World hacks, but that doesn't mean they have to be Super Mario. So, I figured for my 4800th post, why not show off progress on the ReTelling of the one hack I'm most known for: The Fourth Sector

You see, the current version of the Fourth Sector on the site is very buggy, and over all looks bad; I want to fix that. Really I want to fix that with the entirety of TD4C by getting rid of all the Mario stuff; while there are some things that will need to stay, like ?-Blocks and other recognizable assets, for gameplay reasons of course, you can expect original characters and the titular characters that the TD4C is known for: Hunter and Scorpion, who will be rebranded to "Simile" and "Metaphor" respectively, do their darndest to do villain things, and you as the hero, strive to stop them; all on the meanwhile uncovering some hidden mystery about both the world and these aliens, for what they do isn't done because they're evil. Often things are much deeper than what would appear on the surface. Enough about story stuff, here's some screenies and some vids, enjoy!
The "Black Heart" player graphics you see in one of the videos are a stand in for another character because I figured while I am making this hack, I would like to play with Black Heart. Neptunia is a series I'm in love with, and despite what anybody may say, Noire/Black Heart is best girl, no contest.

Also, without the contributions of people like "Mellonpizza" or "Imamelia", this hack wouldn't be possible; you guys are the best!

World 7-1
And lastly, here is a teaser trailer, albeit outdated now, of Huntre and Scorpion's Bet: Scorpion's Search for the Golden Dollar, which is a less serious, much more humorous work that takes place in an alternate world where Huntre and Scorpion are not villains, and the goal is to win a bet.
Why hasn't anybody made ledge grabbing and crawling ASM yet?
Last edited on 2020-10-15 09:26:51 PM by Skewer

Posted on 2020-10-16 01:05:55 AMLink
Was it 2008? The original Fourth Sector was one of my favorite SMW hacks. This one looks mind-blowing with hard platforming and integrated puzzles that I know you for. Each level video looks engaging and not so confusing or too long.

Your artwork is even more refined than ever yet unchanged in style and you're making really good use of Lunar Magic's new toys... that volcano level and the industrial space junk level (7-1, really getting Strange Journey Delphinus vibes here) are so atmospheric. In general, your space and technologically-themed sets are incredibly imaginative and fresh - how you get that much from mind to pixel, I wish I knew. I also love the deep, rich colors here that look like Sega Genesis colors. Remembering how your enemy graphics looked and comparing them to how they look now is probably the most drastic artistic improvement.

New video of a brand new level; yes, this remake includes new levels and not just a 1:1 remake.
Why hasn't anybody made ledge grabbing and crawling ASM yet?

Posted on 2020-11-06 06:38:28 AMLink
Masterful art and coloring in there. Something about the violet in the flames not only looks good against the toxic yellow clouds, but seems meaner than more orange/yellow frames. I never tire of seeing the rockier lava animated either. All kinds of attention to detail is put into making this engine-like level live in the way it should with steam, fire, and industrial luster, and keep you moving cautiously and steadily. I am really happy seeing this!
Just look above you...
If it's something that can be stopped, then just try to stop it!

New video of a brand new level; yes, this remake includes new levels and not just a 1:1 remake.

Posted on 2020-11-13 02:52:51 AMLink
From what I have seen so far, this hack looks great. I like the how the artstyle has improved alot, I think all the levels look fun to play, and I think the colors go really well together in the screenshots. Glad to see this series is still happening, even if it is a reboot.

Also that's an odd way of spelling Uni/Black Sister but okay.
Check out my Hack Thread

Posted on 2021-01-16 07:57:15 AMLink
New level and new player graphics to boot. I felt Yusica's (now older) player graphics that I drew in 2016 or so weren't lively enough and not up to my standards. So I redrew them, this video mostly shows off the new level, but also is meant to show off her now more lively, more child-like player graphics. It's tough when you inherit the title of "Hero" at a young, but adventurous age!
Why hasn't anybody made ledge grabbing and crawling ASM yet?

Posted on 2021-01-20 11:19:11 PMLink
The new level looks great. The graphics and music convey a really immersive atmosphere that works really well. Design-wise, the level as a whole seems really engaging.

My only complaint is the section at 2:27 in the video. It lasts for way too long, and nothing happens until the block flies to the other end of the passage. It's one thing to include enemy-less segments to give the player time to take a breather, but forcing the player to hold the crouching button for such a long time doesn't really work to that effect.Twitter
The handomest people in the world are ones who follow my Twitch

Posted on 2021-01-21 12:48:33 AMLink
Agreed, I've tweaked the level a little bit to remove the section and just included a small rest stop in between that area and the next one; given the level is a pretty lengthy and difficult one, the player needs time to sit and rest. Thanks for the feedback.
Why hasn't anybody made ledge grabbing and crawling ASM yet? 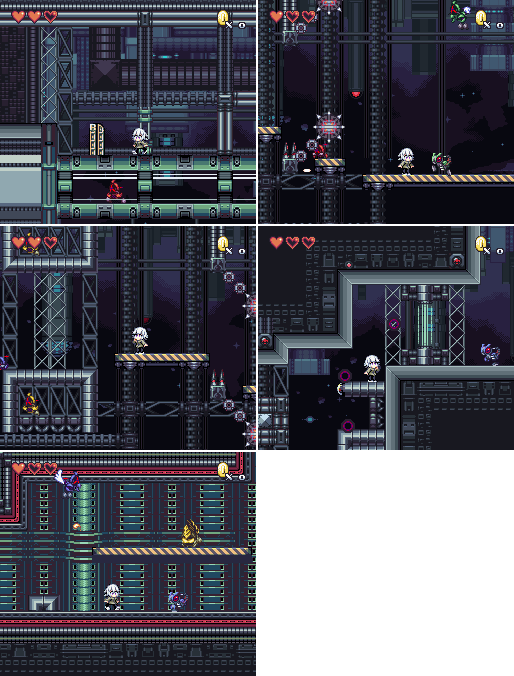 So, I'm finally hard at work on the Space Station levels, which I would say, next to the interdimensional levels that is the hack's namesake, Scorpion's Space Station is probably the most memorable world of the hack because the whole thing is basically spent building up to it. I think this is the most I'm going to get at making the place look like a super space station.
Why hasn't anybody made ledge grabbing and crawling ASM yet?

Posted on 2021-06-30 01:39:46 AMLink
greetings.
i'm dustyized , long time no see scorpion! i want to ask you an question...
hey , i'm so long not to watching your works , i wonder this working when is geting updated
i can't waitng see for next update progress...that was amazing ! i like that new projects