Hey i make a SMW Hack for a Youtube format

Posted on 2020-12-24 11:10:11 PMLink
It's a good demo! Some of the levels have some pretty interesting gimmicks, and as such are pretty fun to go through. Something I noticed while going through the hack is that it almost feels like something that could pass as a player's first kaizo hack - the difficulty pretty consistently feels like it's halfway between "very hard" and "kaizo light".

Overall, the level design is pretty good. However, I think the final two levels, "give Yoshie to eat" and "in the Sky" could use some work. With the former, it feels unusually short (also, those level names ... well, I talk more about that detail later). The level starts with a "feed Yoshi" puzzle, which is fun for a bit, but almost immediately afterwards you need to sacrifice Yoshi, and then the level ends. It's not bad really, but it feels out of place with how little there is to do, and with how unexplored the gimmick is. The latter doesn't feel as unexplored (probably due to it not having as unique of a gimmick), but it still conveys the same sense of not being developed or super exciting, since it's so short. Aside from these two levels, however, I stand by my statement that the level design is pretty good for the most part.


Now for some more specific bugs and compaints: 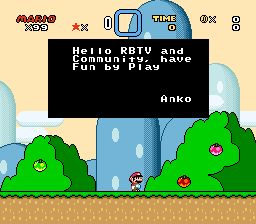 Although I understand what this is trying to say, there are numerous grammatical oddities that make it hard to read. This is a consistent theme throughout the hack, actually, where message blocks and level names have spelling errors and general readability problems. Normally this is where I would suggest proofreading your texts more thoroughly, but I'm getting the impression that English isn't your first language (pardon me if I'm mistaken), so if you'd like to perfect these texts then you're more than welcome to PM me and I'll be able to help you rewrite your texts more thoroughly. 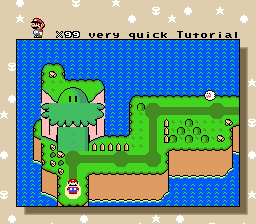 This overworld is a pretty good start, but there are some visual problems with it. The large landmass near the middle appears awkward and has cutoff, due to those green tiles you put in front of it. It kind of looks like it's meant to represent a large tree with a canopy? I respect the creativity, but it might be better to use some actual ExGFX for this. 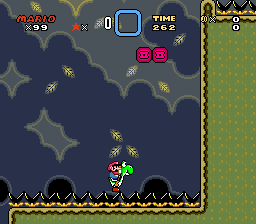 So, it seems like the red blocks are supposed to represent the bouncy note blocks, but the graphics don't exactly work as intended. The moment you jump on one, it returns to normal: 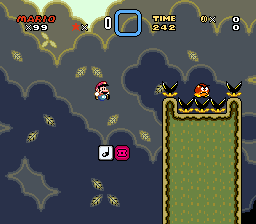 I'm guessing you put the graphics and set the "Act as" in Map16 to act as the note block? It might work better to just replace the original note graphics in the .bin files. 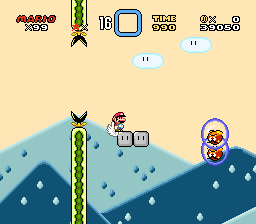 There's a graphics glitch on the flying platform here where one of the wings vanishes. It happens when the goombas enter the frame, so it might be some sort of memory overload. 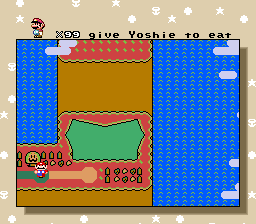 Sorry, but I really don't like the palette on this overworld. The green and pinkish-red colors don't go very well together, and the decorations (like the smiling tree) don't look very nice either. Try some different colors until you can get some that look more smooth together, and don't clash as much.

Also, there seems to be a lot of open, waste space here. Even if you aren't using the large sections of water on the left and right areas of the OW, you should at least add some decorations in the water, or perhaps even spread out the land a bit, so that the player isn't focusing on only around half the screen. 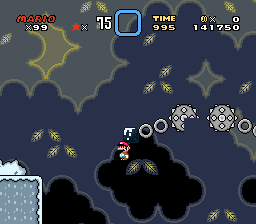 Several graphical glitches in this level, namely with these spike balls and the note blocks.


To reiterate, it's a generally good demo - I honestly don't have a lot to complain about, just a few minor graphical errors, some grammar problems, and one or two levels that need to be fleshed out more. All of that can probably fixed without an insane amount of effort.

Keep up the good work!Twitter
The handomest people in the world are ones who follow my Twitch