The Nintendo Presents is unchanged.

Okay so I guess you'll put something here but, at least spell "message" right. 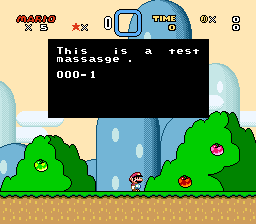 The overworld is quite nice but I can see that the sunken ship is on a rock, maybe a weird choice but other that it's a pretty solid submap. (The other submaps and the main map didn't have any problems, so I skipped over them.) 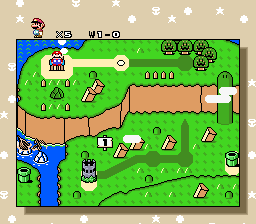 W1-0:
Wasn't changed that much, the text is unchanged. 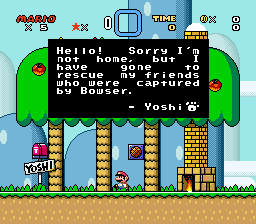 W1-2:
Another very fun and very simple level. The use of vines in this stage is just amazing. Prompts to that.

W1-3:
A rather simple level with a secret exit. All levels so far were reminiscent of the original levels. This one is inspired from 103 or Yoshi's Island 3.
Let's move onto the Yellow Switch Palace.

YELLOW SWITCH PALACE:
Lots of coins and paths to choose, personally took the bottom path and it's not too bad. Very simplistic switch palace.

W1-4:
I liked the use of the Layer 3 Water in this level, with the spike balls and fish. Even the underwater subarea was cool.
Like playing regular SMW again, just brings nostalgia. I love this hack so far.

W1-5:
Very easy and very short, with an Iggy bossfight to top it off.

World 1 was amazing and felt like nostalgia to me with the uses of the layer 3 water and the yellow switch palace secret.
Feels like a sequel for regular Super Mario World. You really did an amazing job!

W2-1:
The classical pipe behind the level. Amazing place to hide a secret exit. Good Job!
This coin block here while useful can impact the players jump and can make them lose a life. I suggest you remove it. 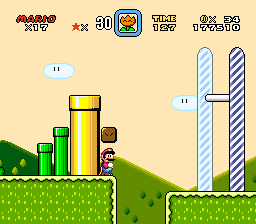 The level is overall quite good, I liked how you used super koopas with the high ground, but this level could use some big bushes or more small bushes.

W2-2:
That coins is amazingly placed, give the player that memo of "Hey! There is a secret here!" Which it actually was. Amazing ghost house overall but you could change the BG scroll rate to variable instead of constant.

I'll group these level together because as you said, they aren't finished yet.
W2-5, W3-6, W3-8 and Star World will be omitted from testing due to your note.

W2-3:
In this pipe you don't exit like normal, you just fall instead of the pipe exiting animation. 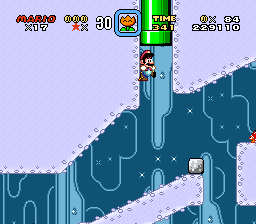 Slip-slide cave level! I loved it, it was harder than the previous levels, which is a good thing and shows the difficulty curve slightly rising.

W2-4:
This, again, is another amazing level, only thing that could be improved is giving more time to the player, other than that the level is full of secrets and subareas to explore.

W2-6:
The secret exit was well hidden, it took me a couple of tries to find it. The enemies are well placed and aren't hard to dodge even while holding the P-Switches.

W2-8 Green Ruins:
When too much stuff is on screen this Volcano Lotus, glitches out a little bit. This section is also very hard without taking damage. 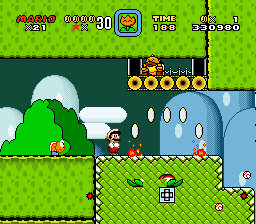 It was a good hard castle and was the only one to have a name next to the stage number.

GREEN SWITCH PALACE:
Unlike the other palace, this palace has a timer. Palaces should have timers normally so changing it to 0 here would be recommended.

W2-7:
As you said, the secret exit is unfinished so I'm not gonna comment on that.
Small cutoff here, no big deal. 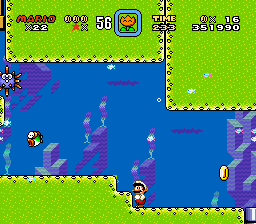 World 2 was pretty solid too (Except the not finished stuff). I liked the uses of levels and changes you made, even adding a custom made castle into the mix.
I liked World 2 and I suggest you maybe more decorations to some levels but other than that, it was amazing!

W3-1:
Yup, a cave level. A lot of backtracking to get the secret exit but at the end, it worth it.
I recommend you remove the piranha plant here, it doesn't pose any challenge and gets stuck into the wall afterwards. 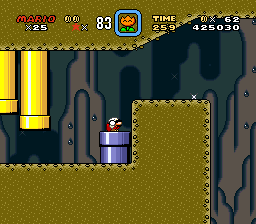 This level is very reminiscent of the original games Vanilla Dome and I can see it was very much inspired by it. I love this level a lot.

W3-7:
A very cool mix of Vanilla Secret 2 and Vanilla Dome 4. I loved the Layer 3 water usage here as well.

W3-2:
This level is like W3-7 but without water, and more reddish! I loved the Yoshi Coin placement here, very challenging.

W3-3:
A vertical cave level, like Vanilla Secret 1 but the ending is in bright red.

W3-5:
While the fortress itself is good, i suggest you put a checkpoint near the boss door, so if the player dies they don't have to beat the whole fortress again.

And since W3-6 is unplayable that concludes my testing. I gotta say, this hack has some amazing charm to it, like the original game.
Feels very Nintendo and they're approach on the Dinosaur Land if they were to revisit it again.
Amazing job in the hack so far, keep it up.


Originally posted by Segment1Zone2
W2-3:
In this pipe you don't exit like normal, you just fall instead of the pipe exiting animation.
(image)

About this, I think that is how original game works, so I may keep that .


Originally posted by Mohmad20zx
I think you need to plan your levels perfectly
I don't get you meaning.

This is not how it's in the original game, the only place where the player falls from a hole is Donut Plains 2 and the third part of Sunken Ghost Ship. There is an exit animation for exiting out of vertical pipes downward when you alt + right click Mario on the dropdown menu.

From what I have played in the demo it's of fairly Normal difficulty.
Some levels have to be toned down though, like 2-8.

I also think in the future you should decide what difficulty you're aiming your hack at so you can have a steady difficulty curve leading into the next few worlds.

I'm wondering when you're gonna release the next demo, I'm excited to play it.

Posted on 2021-01-18 09:12:03 AMLink
Originally posted by Segment1Zone2
This is not how it's in the original game, the only place where the player falls from a hole is Donut Plains 2 and the third part of Sunken Ghost Ship. There is an exit animation for exiting out of vertical pipes downward when you alt + right click Mario on the dropdown menu.
In DONUT SECRET 2, there is a secondary entrance #1C6 that set "Do Nothing (Slippery Level) - Cannot Bring Item" to keep slippery effect.

I won't mention anything that isn't relevant to the testing. I will note however if an issue persist from the previous version.
If I find a level that previously didn't have an issue I'll note it. (duh)
Any levels that don't have anything special will be skipped, blah blah blah let's move on..

With that out of the way lets start actually testing stuff!

It sadly doesn't have the name of the actual hack.

Simplistic message box, and the story is very simple, as all other vanilla hacks. ;P
I like how the version of the hack is displayed at the bottom right side.

Nothing much to say here, relatively normal submap, although I can spot a single perspective issue.
Here. 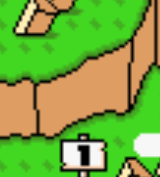 The text remains unchanged from the previous version.

While it isn't an issue necessarly, It could benefit from a more personalized message.

It's a bit of a problem when you go into a subarea to get a Yoshi coin, only to skip the previous one in the stage.

After searching a bit for the last Yoshi Coin I came to a conclusion that it doesn't exist. Make sure to recount the Yoshi Coin number. (Currently has only 4 Yoshi Coins)

As I stated before, this castle is very short. I would recommend extending it a little bit more and flesh out the net gimmick a little more.

Oooh! That message is really basic actually, but it kinda nods that it's only gonna get difficult from here.

I would say, World 1 is of Easy difficulty so far, but don't get that as something special, the hardest level is ranked for the difficulty of the whole hack!

Just like the last Overworld, this one too has some perspective issues, I won't go into detail with these but rather list them all.
Like I said before, follow the top portion and the bottom portion, if they don't line up, it's a perspective issue.

One here, at the top side of the map.

One over here, at the top right side of the map, with the Castle 4 near it. 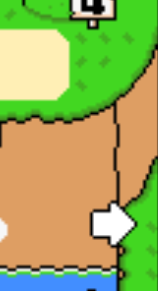 This beach looking area, above the World 6 Castle. 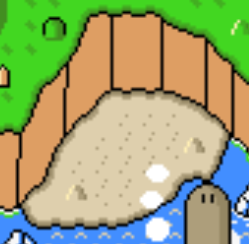 Not a perspective issue but you misplaced the corner tile here.

Wow, that's a lot of perspective issues, but we aren't done with the testing yet! We have levels to beat.

You exit this pipe a little to much forward, I suggest moving the downward exit 1 tile upwards. 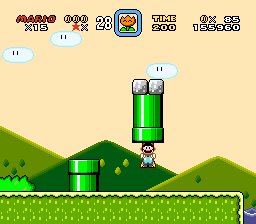 Previously, W2-5 was unfinished, this time it is finished and we can play it. Let's see how it turns out.

A really interesting and challenging level. The secret was pretty standard and wasn't difficult to find.
However, in this level I was only able to find 2 Yoshi Coins, Please recount the number of Yoshi Coins in levels where i mention the lack of Yoshi Coins.

The problem persists from the previous version, but now the camera is slightly changed. 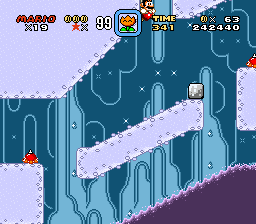 I still prefer the downward exit animation from just dropping down from the pipe.

I like what you did here, but there is a spelling mistake here. 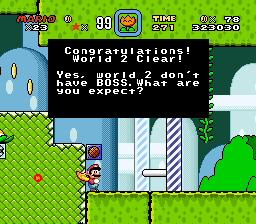 The sentence is in a wrong tense, it should go something like "Yes, World 2 doesn't have a BOSS. What did you expect?"

With that, World 2 is concluded. I'd say, we reached Difficulty Normal so far. Its not challenging enough to be Difficulty Hard yet.
We might get a different story from World 3, who knows...

World 3 didn't have any notable issues, and with that I conclude my testing. I can safely say that so far this hack is of Normal Difficulty. But it might change in the future.

Overall Opinion:
There wasn't many changes, and most of them were small bugfixes.
I recommend making a testing version when you have completely finished World 3.