A Plumber For All Seasons - RELEASE!

Publiée le 2021-07-04 08:05:49 PMLien
You just know your hack is something special when even good old FPI decides to log into SMWC again for the first time in years, just to comment on it! 🙂

Can't wait to properly play this myself. People may think that I already did, since I'm listed as one of the testers in the opening post, but the truth is that I hardly got to see anything. I was among the people testing the hack on real hardware, and during testing, I ran into loads of major issues that basically prevented me from playing, which at first we thought were hardware incompatibilities. After wasting a lot of time trying to fix the issue, it turned out my SNES itself is actually broken in subtle ways. That sure was a thing. 😅

After converting the hack to SA-1, it did become playable on my SNES, but I think for the time being, I'll stick to BSNES and then come back to playing it on real hardware once I found a proper solution to my problem. I've noticed that my TV produces quite some lag with analog inputs, anyways. Not quite the ideal environment for playing. One day, though!Feel free to visit my website/blog - it's updated rarely, but it looks pretty cool!

Publiée le 2021-07-05 01:04:32 AMLien
I’m not very active on here anymore, but one thing that kept bringing me back to this site was an interest in how much progress you were making with this hack. Having now played it, I think it’s fair to say that it’s one of the best that I’ve come across in over 10 years on here. You’ve really outdone yourself and should be really proud of this.

One little thing I will add: if you are to make a future update on this hack, could you possibly do something with the giant snowballs in the igloo and the bubbles in Bowser’s castle? The way the former just appear out of the walls and the latter out of thin air is unusual when you consider the excellent attention to detail in every other part of the hack.
Dernière modification le 2021-07-05 01:05:41 AM par G.n.k.

Publiée le 2021-07-05 01:11:04 AMLien
I'm having such a blast with this. I didn't think a hack could get this professional, not only in the sense of having original content of all kinds made for itself, but in the general design as well. It feels like I'm playing a real game by Nintendo. Of all things going through these levels feels a bit like the DKC games, with all the secret bonuses and whatnot. Everything plays like it's been very well thought out, which is something I always appreciate.

I've said this a few times but I can't congratulate you enough for finishing this long-lasting project. I can tell a lot of passion went into it, from you and from everyone who made a thing or two for this as well. Your work really did pay off, you can trust me on this.

Publiée le 2021-07-05 01:21:31 AMLien
So far I've been let's playing it, so I am indeed been playing it. OH MAN that hype is actually paying off, I really am enjoying this hack as it is right up my ally! While yes a good game only needs level design, a great game has both level design and a good art style to boot! I especially like how you see gimmicks from previous levels make their return in future stages, which is something Mario typically doesn't do that often. I can tell the Urchins on Rails has it's use from what I played!

Can't wait to play more, but so far this is forming to become one of my favourite hacks. I want to beat it before I draw any concrete conclusions, so I guess I'll have to keep playing!!!! YOUR SAMPLES ARE COMING SOON !!!

Publiée le 2021-07-05 03:26:53 AMLien
Just got done playing up through the end of Spring and damn, this is really good. The graphics are all gorgeous, with the use of HDMA, parallax, and transparent layers. I absolutely adore the look of the underwater tileset you've put together. I'm having a lot of fun going through this, and it's really nice to see such a long-standing project like this get released. Congrats on the release!

I'm overjoyed to hear you've been having a good time playing it, and relieved to know it's been living up to the hype.

It's wild seeing APFAS making the rounds so quickly, and I've been watching a couple of videos and streams that have already popped up. Seeing people finally play a thing I made and talk about it, after my work is done, is a hard feeling to describe. Just makes me sit there grinning at the screen.

Thanks for the comments reporting issues, too! Overall, there have been a handful of things that are both glaring and easy to fix, and it looks like it's worth tending to them.

Which is to say, expect a small update tonight! It's mostly minor visual tweaks as well as a fix for a star coin despawning, but with some luck there's also going to be a new last-minute addition to the soundtrack. Unfortunately I won't get around to smoothening the snowball spawning G.n.k. mentioned, and I won't get around to making star coins save more often either, because those would be comparatively large changes to introduce last-minute which may cause bugs I don't have the time to tend to. My mode of operation right now is to be done with his hack. Hope you understand!

Publiée le 2021-07-05 01:30:21 PMLien
I just finished the first map.
Really great so far. I felt like I was playing a whole different game. Map style, sprites, music...
I will continue to play with excitement.

EDIT: I completed the hack and it was awesome. There was a lot of creative work. Sprites, graphics, layers were perfect. I think this hack is one of the most iconic hacks of 2021. Good luck for C3!I couldn't find anything to write :| By the way my Youtube channel
Dernière modification le 2021-07-06 02:21:32 PM par OEO6

Publiée le 2021-07-05 06:34:14 PMLien
This hack is a masterpiece!
It managed to transform a simple smw into practically a new game!
This shows that hacks only tend to evolve more and more, congratulations on the work 10/10!

Publiée le 2021-07-05 08:01:02 PMLien
So I've been playing APFAS and I'm having a good time when I ran into a problem. I'm running into a glitch in the level All Hallows' Eve where there's a star coin behind a pumpkin, crammed between two logs. After hitting the switch that toggles the pumpkin torches that star coin also disappears, making getting all the star coins on that level impossible. I have tested this both in ZMZ (my emulator of choice) and SNES9x.
Dernière modification le 2021-07-05 08:03:03 PM par FireSeraphim

Publiée le 2021-07-05 08:13:50 PMLien
Fanatical like a Demon
Holy shit 9 years??? Dude MAJOR props. I haven't playe the hack yet but seeing people's responses from finishing the game shows that it's wonderfully madre and had genuine love and care put into it rather than simply being hype. From what I've also see, it's a nice short (ish) hack that features quality over quantity so i can definitely see myself being able to make the time to play it which I definitely will! As someone who started off back in 2007 (2008?) making kaizo levels on graphing paper bc lack of computer and then 2012 onward never finished said hack bc of lack of level design ideas, I applied the determination! This gives me hope I can one day finish my hack! You and everyone that helped should be proud!
Major thanks to Suika Ibuki for layout!
I'm open for music requests, just DM me on discord and we can further discuss there.
SMAS Soundtrack Status: 100% finished
YI Soundtrack Status: 100%
YI Unsampled Soundtrack Status: 100%
NSMB Soundtrack Status: 7.89%
Killer Instinct Soundtrack Status: 14.63%
SPC Thread
From our family to you, keep your pants dry, your dreams wet, and remember, hugs not drugs.

Publiée le 2021-07-05 08:35:46 PMLien
This feels like a completely different game, The effort put into this hack is impressive and inspiring for everyone else on the site.

Congrats!!!
Still thinking on a description...

Publiée le 2021-07-05 08:48:21 PMLien
I know this hack has been showered with plenty of effusive praise already but it is well deserved. After playing it, the care and attention to detail in every level is very evident, you've done an outstanding job here, congrats on release. 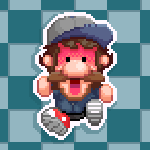 Publiée le 2021-07-05 09:41:47 PMLien
Visually from what i've already seen this already blows my mind - can't wait to get my hands on it and give it a proper go. Grats on the release and the praise is much deserved after all the hard work.

Publiée le 2021-07-06 03:01:35 AMLien
honestly im honored to have been a tiny part of this. i couldnt do as much hardware testing as i had hoped, due to very limited free time, but either way its good to see this out in the wild. youve got great vision and i admire that

heres to your next endeavor, whatever and wherever it may be

Publiée le 2021-07-06 01:55:19 PMLien
This SMW hack is good because of the graphics and ASM.
Also, you did a nice job putting all your efforts in this SMW hack.
I wish good luck in your future projects.

Publiée le 2021-07-06 02:50:08 PMLien
I'm chiming in to the thread to say that I'm really proud of you WYE for bringing us a high quality hack after all these years, and that I'm happy to have the opportunity to help out with composing some originals for this hack. The experience was a pleasure! Seriously well done x100!!!
• Twitter

Publiée le 2021-07-06 04:14:59 PMLien
As one of the beta testers for this, I have to state that I was very honored to be able to get my hands on play this long awaited hack after all this time and be able to help as little as I did.

Congrats on the release WYE. You did a fantastic job, this one of the best hacks I've played in a while and I really hope to see more from you in the future.
Layout by LDA during C3.
Dernière modification le 2021-07-06 04:15:39 PM par Lightvayne