Con lentitud poderosa and Dome were also pretty close. I'm probably biased towards Circ and Pompumstance partly because of the premise involves Giant Steps, but I don't mind letting that sway my opinion.

Last seen: 9 minutes and 16 seconds ago

Posted on 2021-09-21 12:30:38 AMLink
1. Yoko Shimomura - Main Theme [Xenoblade Chronicles] - Rich strings and flutes everywhere. Love it! I really should play Xenoblade game at some point, haha.
2. Deelatch - Circ and Pompumstance - For being out of the norm with dissonance kinda allover, this was pretty cool! This one has a lot of ideas, but the song really sounds at its best once it hits 0:42.

3. niki (feat. lily) - ELECT - I like the vocals, and the way the notes shifted around in this song. Only complaint I have is that it felt too crammed.
4. Disclosure (feat. Kelis) - Watch Your Step - Almost made my pick. It was a nice pop song to listen to, and it got my head banging.
5. Jin Watanabe - Dome - It's good. Slightly biased towards any song used on old gaming hardware, but it also gets outclassed easily for me to give it a high rank.
6. Chris Christodoulou - …con lentitud poderosa - I like songs that save the energy towards the second half of the song, though this sounds too much like a soundscape song for the most part, which turns me off.
7. Dan Swanö - Uncreation - Creative? Yes. Tasteful? Ehhh... no.
8. NONA REEVES - Satisfy - I honestly found this one to be boring. It sounds like movie credits.

EDIT: Oh yeah, I forgot to mention that I was the one who nominated Hennings Project - You Don't Care in the previous round. I chose that one because I really liked it because of the chillness factor it had, and the ideas kept stacking throughout the song as it progressed. Even though I knew its one flaw would be the repetitiveness, but I figured the way the ideas stacked would get around the fact that it repeats a lot. Seemed like some people found the chillness factor and the way the ideas were getting stacked to be enjoyable, and I'm glad it was voted a lot ^^
• Twitter
Last edited on 2021-09-21 12:44:44 AM by Giftshaven


From best to worst:

Yoko Shimomura - Main Theme [Xenoblade Chronicles]
- Maybe I'm biased here because I've always been a huge fan of Xenoblade's soundtrack, but I really do feel like this song accomplishes something that the Risk of Rain track fails to do; it manages to capture a beautiful atmosphere while still carrying emotional impact even outside of context. I first listened to this track long before I actually played the game, and I thought it was utterly phenomenal then as well.


Disclosure (feat. Kelis) - Watch Your Step
- Ah yes, some good old fashion pop. Really gets me wanting to dance every time I hear this tune. The vocals are on-point, too.


Deelatch - Circ and Pompumstance
- Reading the Soundcloud upload's description of what the prompt actually was is pretty great. All-around a very vibe-y and exciting song that manages to captivate despite being so weird and dissonant.


niki (feat. lily) - ELECT
- I'm not the biggest fan in the world of the effects used on the vocals, but god this is so hype. I love it.


Jin Watanabe - Dome
- Very funky and atmospheric. It vaguely reminds me of lo-fi music in that it's the sort of thing I would play in the background while doing other things and not really focus on.


Dan Swanö - Uncreation
- The deep heavy-metal style of vocals took me by surprise, as the instrumental gave me a very different impression of where the song was going, but it works surprisingly well. Once I warmed up to the vocals, I had a lot of fun listening to this; I just don't feel like it needed to be almost six minutes long? Sometimes less is more, folks.


NONA REEVES - Satisfy
- Very chill, for a pop song. I do really like the sound of it, but I don't feel that it holds much of a candle to any of the others.


Chris Christodoulou - …con lentitud poderosa
- The first half on its own is pretty nice and relaxing, and then the fantastic guitar section in the second half hits you. I haven't played the game that this is from, but it sounds like it should suit an amazing cutscene. I don't feel like I would ever listen to this outside of the game, though, because the "atmosphere" is all this song seems to have going for it, lacking any amount of catchiness or funkiness that would make it more listenable outside of the game.Twitter
The handomest people in the world are ones who follow my Twitch

Posted on 2021-09-21 03:57:20 AMLink
I’m not really a sophisticated judge, I just go with what sounds cool, but my picks are:
Deelatch - Circ and Pompumstance
niki (feat. lily) - ELECTEvery dream is but another reality, never forget… 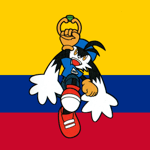 Last seen: 42 minutes and 12 seconds ago

Very competitive sets so far. Starting to think winning this might not be so easy.

Originally posted by Exodustx0
Deppy, can I request that the OP be updated with the link to the last post with the current-round info? Would make it easier to keep up-to-date.
That is something I normally do, so I'll make sure to remember in the future. I should also mention that updates are also done on Discord in our new #music-tourney channel!

I have no solid pick between those two but I have them at the top so at this point I don't need to worry about that.

1. Son Lux - Easy: I actually really like this one. It's a super chill and laid back song, and the kind of thing I'd listen to while editing videos or on long car/train rides.
2. Casiopea - Eccentric Games: This is a really funky and catchy song; It's one of those that just feels good to listen to. My only issue with it is that it's just a little bit too long.
---------------
3. The Animalhouse - Small: I pretty much feel the same way about this song as I do my #2 pick, but I just like Eccentric Games a tiny bit more. My favorite part of this song was honestly the slow part at the end.
4. Lars Danielsson - Passacaglia: This song was nice to listen to, but it isn't something I would add to my playlist. If anything, it's a song I would use to help me fall asleep (not in an insulting way, moreso that the song is just really relaxing).
5. Sophie - Faceshopping: One of the top comments on this video sums up my thoughts on this song way better than I can:
"guess i'll have to lock my door and dance like i'm simultaneously having an epileptic seizure, a prostate orgasm and an exorcism again"
6. Rymdlego - Yuki Satellite: This song got boring VERY quickly.
7. Hayato Asano - Spring Wind Skylark: First of all, curse you for nominating an extended loop for a music tourney!!! Either way, I don't think this song is particularly interesting. Doesn't sound like anything I haven't heard before.
8. Le peuple de l'herbe - Yini Bo: This song was alright to experience, but it's also kind of obnoxious and not something I would go out of my way listen to again. It's one of those songs that gets stuck in your head, but in a bad way. At least the music video was interesting.Check out my WIP romhack!

Last seen: 50 minutes and 53 seconds ago

Last seen: 9 minutes and 16 seconds ago

Posted on 2021-09-21 06:08:08 PMLink
Let’s face it: I’m not a pretentious hipster or what have you, I know nothing about indie music. That won’t stop me from affecting the polls with my bad taste in music though! Here are my two picks:
The Animalhouse - Small
Hayato Asano - Spring Wind Skylark
I’ll see you next thread for more decisions. I can’t wait until people are judging my tasteless picks!Every dream is but another reality, never forget…