Posted on 2022-11-01 07:13:44 AMLink
I realised I forgot to mention something when I uploaded my last update: I had to edit level C5 a little bit because it got the wrong song when the custom music was added, then had to edit the bush because LM was extending the level one screen.

Well, I guess I'll return to make the main map, I will be on recess by December 8th or something, then I will be able to concentrate on it.

No. I see no good reason to do so.


Originally posted by MORC
Well, I guess I'll return to make the main map, I will be on recess by December 8th or something, then I will be able to concentrate on it.

This version of VLDC6 fixes the palette issues with overworld indicators and should not have any issues with exits not saving.

There is still no genuine completion reward, but a special 112 and star shows up on your file on the title screen if you get every exit.

The title screen may or may not be edited further. At this point, the compilation is nearing completion. All that must be completed is the credits sequence, the main overworld, and the issues related to global Map16.

the Ashy Plains level in this newest version as well as older versions have a total of 3 dragon coins, and not 5 as this level was indicated to have 5 dragon coins on the OW map in versions 0.6 & 0.7 but actually contains three (so there are two missing). didn't get a chance to report that earlier since I was kinda busy for a while.

Alright, I have updated the overworld indicators in my version of VLDC6. The next version I release will include these changes (likely along with other fixes).

Alright, I have updated the overworld indicators in my version of VLDC6. The next version I release will include these changes (likely along with other fixes).

thanks. though I found a few more problems - Burst Man's level has only 4 dragon coins, not 5 - so add one more

in Terrible Whiteness level, in the latter part of that level I can only choose to go into either the yellow pipe on the left or the blue pipe on the right (requires the blue p-switch for that one) and both paths lead to near the boss and can only get up to a total of 4 dragon coins up to that point before the boss fight.
so it is currently impossible to collect all 5 dragon coins in Terrible Whiteness.

all these levels in newer versions need to be playtested fully before a new version is released
Last edited on 2022-11-05 02:44:56 AM by erpster2

Posted on 2022-11-05 02:46:21 AMLink
Do you want to fix errors that were part of the original entries? I get for something like a misaligned background, or an error introduced during the level insertion, but I'm not sure if this would take away from what the entries are.

Alright, I have updated the overworld indicators to account for the lack of Dragon Coins. I won't be updating any levels (as in adding dragon coins to them) since they were designed that way and do not detract from the functional aspect of playing the level. If I find that a Dragon Coin-related issue has come about from something I did in the process of inserting everything, then I will fix the issue where it is appropriate to do so.

Yeah, I was rushing when I was looking through the levels to see if they had Dragon Coins in them or not and didn't take the time to make sure 5 Dragon Coins could be collected in every level marked with having them. I'll make sure to test the levels before the I release the next verison to reduce the amount of issues brought up after releases.


Originally posted by MORC
Do you want to fix errors that were part of the original entries? I get for something like a misaligned background, or an error introduced during the level insertion, but I'm not sure if this would take away from what the entries are.

If a level has Dragon Coins and it is impossible to collect 5 of them, I will not add more Dragon Coins unless I somewhow removed one when I was inserting all of the levels (which I doubt). If I fix a level, the issue either has to do with a mistake I made when porting stuff over or an issue that kills the player for no reason whatsoever (which is really only a level entrance spawning you somewhere where you immediately die). All I will be doing with levels that do not have enough Dragon Coins is updating the overworld indicators and not the level itself.

In the Great Koopa Gate level, taking the upper paths to Lemmy and beating Lemmy
as well as taking the alternate paths to the goal tape & goal post all count as
a normal exit only. no "special goal" nor keyhole exit was defined nor set in
that level, even though its overworld status indicates that level is supposed to
have two different exits. suggestions to set the "goal tape" at the goal post to be
counted as a "special" goal or alternatively replace the goal post & goal tape
with a key & keyhole exit and let just the Lemmy boss fight count as the only normal
exit.

In the Forest Stroll level, after reaching this hidden 3up moon section 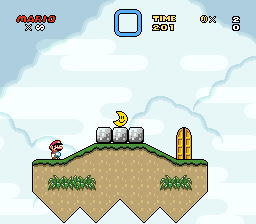 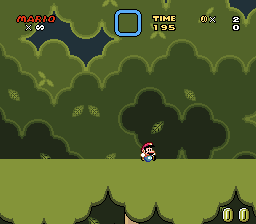 where Mario falls at the bottom of the screen and dies

This most recent version of VLDC6 adresses all of the issues brought up by erpster2 in addition to some other problems I noticed while playing through all of the levels. I collected all of the exits, dragon coins, and moons, which ended up taking me through almost all the sections of every level.

After taking a look into it, it is actually possible to collect all of the Dragon Coins (although it isn't very intuitive). At the section where you have a choice of what path to take, get the P-Switch but do not use it to turn the blocks into coins. Take it with you into the available pipe (the yellow one) and take it through most of the section (along with a powerup). Towards the end of the section, pressing the P-Switch will make a door appear (where some coins should mark its presence), leading you to the Dragon Coin placed under the blocks that can be broken by a spinjump as big Mario.

I think I was not clear enough on this one as I should have said "if I have to wait longer before a new major release" or something close to a 1.0 version of VLDC6 (maybe like 0.8 or 0.9)

Posted on 2022-12-07 07:14:15 PMLink
this hack looks great along side the other vldc Collab hacks, would getting rid of the bonus game you get after getting one hundred stars after hitting a goal tape help get this hack finished

Posted on 2022-12-21 02:07:45 AMLink
Originally posted by werd
will there be a selection of characters like in vldc 12 where you could chose between Luigi and mario

highly unlikely or doubtful that will make it into VLDC6 since it currently allows choosing either a 1-player or 2-player game
Last edited on 2022-12-21 02:08:16 AM by erpster2

I'm currently trying to get ideas for the main map. I'm considering splitting the seaside world levels into the other worlds as I don't feel there are enough water levels to justify it, in the other hand some levels just don't fit anywhere else. I'm open to suggestions as always.