Super Boss Collection - A hack with just boss fights! (Version 1.1.1 is out!)

A hack with just boss fights!

In this hack, you can fight against 77 bosses, including all the original SMW bosses, bosses ported from other games, and bosses created by other users!

The original title of this hack was going to be "Tower of Bosses", with the original idea being making Mario fight against all bosses one after another, but then I discovered bugs such as the SMB3 Lakitu staying frozen and Elec Man making the game crash. Said bugs wouldn't happen when making Mario go back to the OW after defeating one, so this is what I did.

I'm aware of a hack series called "The Endless Boss" which does a similar thing, but these hacks were made on top of other hacks. Mine was made on a vanilla SMW ROM.


Download
In Version 1.1.1, each stomp on Elec Man, Shadow Man and Star Man now takes 8 points of damage from them. Which means you now only need to stomp them 6 times to defeat them.

Version 1.1 is out! This update adds 21 more bosses to the hack, bringing the total to 77!
The download link can be found on the first post. 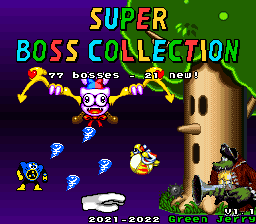 The title screen will be changed every major update.

Now, here are some screenshots showing some of the new bosses:

Additionally, I made some other changes and bug fixes. Read the readme for more info.

Posted on 2022-02-16 04:41:34 PMLink
Originally posted by Brutapode89
Is there a zip folder to download custom bosses like Marx?
Do you want all of the old bosses I've converted and used in the hack?

Posted on 2022-02-16 05:35:36 PMLink
Originally posted by Brutapode89
Yes. Are these compatible with PIXI?
Here it is.
And yes, I used Trashkas to convert them to be compatible with PIXI. Includes almost all of the converted bosses used in the hack (the ones that aren't are the Fire Pokey and one of the Mortons, both made by Mao. The former doesn't shoot/spawn its rock, and the latter uses the wrong palette row), as well as a boss that will be added in version 1.2 (Sonikku's Giant Koopa).

Posted on 2022-04-19 06:13:40 PMLink
I've released a minor update that now makes each stomp on Elec Man, Shadow Man and Star Man take 8 health points from them instead of only one. Various people couldn't defeat Star Man due to his high HP and each stomp would only take very little health from him.

I've also fixed a bug where you could press up on some of the Kirby bosses to go back to the map, when you are at the very left or the very right of the arena.