The submission period is now CLOSED! For those interested, all of the songs, their sets, and their seeds can be found HERE. Also, read this post for an explanation about how the Preliminary Round works.

Alright fellas, if you don't know who I am, my name is JupiHornet and I've been here for about 2 years now. Our original host (DeppySlide) is going to be busy with his crime-fighting duties, so I have decided to take over the role of hosting...

If you don't know what this is, it's basically a tournament where everyone nominates songs that first go through a qualifying round before entering the tournament proper. Then, the remaining songs go through a bracket-style tournament until there's only one song remaining.
If you DO know what this and have participated before, you should still read this post because I've made a few changes to the rules. Speaking of the rules...

THE RULES:
- Since this is a Non-VGM tourney (non-video game music for short), your nominations CANNOT be songs specifically made for video games.
- You can nominate up to three songs in total.
- You can only nominate one track per artist.
- Across the whole tourney, only three tracks from the same artist can be nominated (feature credits don't count towards this total).
- YouTube, SoundCloud, and Bandcamp links are preferred (contact me if your nominations are not available on any of those sites).
- Since this site has many users from around the world, please use this site to make sure your video links are not blocked in most countries.
- To add to the previous rule, I would strongly advise against submitting YouTube's auto-generated "Topic" videos, because those are often blocked in many countries.
- PLEASE format your nominations as "[Artist] - [Song]". This makes things much easier for me. For example: PSY - Gangnam Style

Voting will be in the same style as the previous two tourneys:

Preliminary Round: Your favorite songs will be picked from "sets" of several songs and will move onto the main tournament.
Bracket Round: The qualifying songs will go through a series of bracket-style matchups until there is only one song remaining. The final two songs will compete to win the tourney, while the two losers of the Semifinals will compete in the Bronze Vote to decide 3rd place.

If you don't quite get it, I'll explain in more detail once the qualifying round starts. You can also join the SMWCentral Discord server and message me in the #music-tourney channel if you have any questions.

You have one week to submit your nominations. Since this post went up a bit later than I would've liked, I'll give you a bit more time:

After that, I'll need a bit of time to compile everything and make the tournament's spreadsheet, which will be publicly available; this will be used to track votes in realtime, as well as provide a concrete list of all of the songs and what set they'll be in.

With all of that said, have fun! Hopefully I don't get shafted out of the Top 4 this time

Defeat evil... to the extreme!

Submitted for your approval and enjoyment.
GANYMEDE

Tumblr | Facebook | Twitter | PM | SMWDB | SnesLab
Panty and Stocking—and Pop Team Epic, evidently—are coming back. Once again. Yes, I'm counting on you. 『いけいけ団長、頑張れ頑張れ団長！』Help us raise funds for the Armed Forces of Ukraine. #ДопомагаємоРазом / #HelpTogether
“Even if you personally are so dissatisfied with life that you want the world to end, surely the cruel reality is that it will continue on, unchanging. All the better for someone perfectly content, like me.”
– Aya Shameimaru, Touhou Suzunaan ~ Forbidden Scrollery 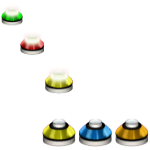 Modern Talking - No Face, No Name, No Number