Posted on 2022-06-27 06:37:57 PMLink
from best to worst
TWO-MIX - Just Communication
I really like this one, has been in my personal playlist for a long time and I was even considering nominating it.

Modern Talking - No Face, No Name, No Number
this song is buried in the recess of my memories and I do not know where I heard it before, but it's alright tbh

Genesis - The Cinema Show
gets better as it goes, a pleasant little song that's not gonna be a favorite, partially because it's a bit too long, but I did enjoy listening to

Ghost - Square Hammer
this ones not my thing, on the contrary, it's hard to rank the last two in general because they just don't really jive with me

Parokya ni Edgar - Picha Pie
this song made me feel nothing, I have absolutely nothing to say about it, I forgot I was listening to it after awhile

Damn; that was a hard choice between Akira and... Picha Pie.
Actually the cover/remix was pretty unremarkable but it's been long time since I have faced a language I don't know at all in a song, I assumed it was hindi? Yeah because there's the word "hindi" in it at some moment and it seemed normal that an Indian language can be used along with english in the same song. But as far as I guess, it could as well have been a language from Indonesia or some.

Akira's song develops a bit slow but there are some sweet spots in it I really appreciated, they made me think of my fav songs from the last spc contest, of course I'm talking about hanna lee's works.

Last seen: 9 minutes and 49 seconds ago

1. Sevish - Starfish: Really cool song that steadily grew on me throughout. I can already see it going very far into the Bracket Round. RIP to the starfish in the video
2. Modern Talking - No Face, No Name, No Number: Sad to see this one being slept on. It's not amazing but I was thoroughly entertained by it
---------------
3. Ghost - Square Hammer: Not mind-blowing, but pretty good
4. Parokya ni Edgar - Picha Pie: I enjoyed this more than it feels like I should have
5. TWO-MIX - Just Communication: I lost interest in this pretty quickly. Way too long for what it is
6. Akira Ishiguro - Aerobics of Alien: Same thoughts as #5
7. HOME - Hold: Very boring, didn't really go anywhere or do anything interesting
8. Genesis - The Cinema Show: I would probably like this if it didn't drag on for 4 hoursCheck out my WIP romhack!
Last edited on 2022-06-27 06:59:58 PM by JupiHornet

Last seen: 8 minutes and 56 seconds ago

EVERYTHING ELSE (in order of best to worst):
Modern Talking - No Face, No Name, No Number
- I'm a big fan of the guitarwork here, and in general I'm a big fan of this kind of sound.
Genesis - The Cinema Show
- There was at least 3 completely separate songs throughout this. What was that ending?
TWO-MIX - Just Communication
- Intro goes crazy.
Ghost - Square Hammer
- This had some interesting stuff going on. I don't know that I would actively seek to listen to it, though.
Parokya ni Edgar - Picha Pie
- Is this a parody song? I get the feeling that it's a parody song. (Upon further inspection, it is.)
HOME - Hold
- How to make your taskbar look like WINDOWS VISTA (2021 TUTORIAL)
Last edited on 2022-06-27 07:12:33 PM by MiniMacro

Posted on 2022-06-27 09:32:06 PMLink
(1) Akira Ishiguro - Aerobics of Alien (78/100)
That's some insane live drumming I have seen, especially for a song this long, so I gotta respect the effort put here.
It's a bit long-winded, but at least it's consistently build together unlike The Cinema Show,
and I even recognize some of the synths used here in other SNES games. My favorite song from this set
so far, which really highlights the performance it's in finest form.

(2) TWO-MIX - Just Communication (66/100)
Is that the SMW reverb snare I'm hearing there?
Thumbnail aside, it feels extremely 90s with the synths used here,
and the vocals are flawless. It reminds me of the opening theme of Tales of Phantasia,
with better instruments and more length. It's the second cohorent song of this set,
giving excitement for most of it's runtime.

(3) Sevish - Starfish (64/100)
The most visuals I have seen so far, it's truly an experience.
This being microtonal, some of the note combinations sound quite off in places,
and I'm not sure about the break during 2:14 either, otherwise the percussion
(esp. cowbells) does a nice job to cover for the fact.

(4) Ghost - Square Hammer (56/100)
Now this is what I call rock music, with a nice artwork to complement it's deeper vibes.
It's worth it for background listening, having a great spiritual voice.

(5) Modern Talking - No Face, No Name, No Number (55/100)
Back to obligatory love music, seeing if this is fully improved,
it is nicely orchestrated and the crowd brings it back to the session.

(6) HOME - Hold (52/100)
This song starts off nicely with atmospheric chords, and I respect that it keeps this effect throughout
the entire song, tho I kinda wish there was more building on this section, as the (last part) is being repeated
over again, and the song itself is kinda repetitive by design.

(7) Genesis - The Cinema Show (40/100)
Right of the beginning, we already start with a long song.
The flute and guitar combo is a nice solo mix, and would probably benefit more if it
was shortened into one song, rather than multiple songs being glued together into one.
6:54 to 10:40 would be the highlight for me usually, even if some sections don't connect well
together due to inconsistent timing.

(8) Parokya ni Edgar - Picha Pie (20/100)
Some of the lyrics here seems to be out of sync with the backing tracks, and it's further
noticable when there are a lot of words being sung at once.
Overall not a big fan of this one. It plays safe, even for rock music standards.

Genesis - The Cinema Show: This went to unexpected places that I like. Varied enough for its length for sure, still a bit long regardless.
Sevish - Starfish: I know that's the point but I thought it was a little... non-cohesive at times? I can get behind tempo changes when I can keep track of them. Some parts are fun, some parts are a bit whatever. I'm sure this will go far in this tourney regardless considering
TWO-MIX - Just Communication: Decent, ambivalent about the singing, not sure if her voice is right for it
Modern Talking - No Face, No Name, No Number: Kinda fun I guess. This song is so out of place within this round I don't even know where to place it, other than not at the top.
HOME - Hold: This is honestly good but way too basic. Was gonna say I'd add this to my electronic music playlist but I'm not even sure it's that worthwile
Parokya ni Edgar - Picha Pie: why 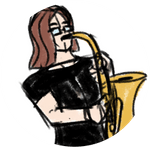 Posted on 2022-06-28 01:52:56 AMLink
Sevish - Starfish: I really like the tempo changes in this one, it's like there are two different time feels going on in the bridge at the same time. I might even like this track more than my own Sevish pick, it's hard to say.

Akira Jimbo - Aerobics of Alien: I was fascinated and enthralled by this performance for its entire run. I dig it.

Modern Talking - No Face, No Name, No Number: 7
Idk I just like eurobeat/europop sounding stuff.

Sevish - Starfish: 6
I'd put this on par with HOME. Got too noisy for me though, and since they aren't in the top two picks I have no need to further elaborate on that.

HOME - Hold: 6
Fine but more so than Two-mix. Yep; that's pretty much all I got.

Akira Ishiguro - Aerobics of Alien: 5.5
I fully understand that it is impressive solo drum work and the guy is good. I'm just not here for it.

TWO-MIX - Just Communication: 5
Fine. Sounds nice and all, its just not my thing (or at the very least, not hitting what I like with this kind of music)

Genesis: 4
Meh. Multiple songs loosely stitched together that probably would have been fine on their own. My favorite part was it just stopping suddenly.

My choices are:
Honorable mention:
Tumblr | Facebook | Twitter | PM | SMWDB | SnesLab
Panty and Stocking—and Pop Team Epic, evidently—are coming back. Once again. Yes, I'm counting on you. 『いけいけ団長、頑張れ頑張れ団長！』Help us raise funds for the Armed Forces of Ukraine. #ДопомагаємоРазом / #HelpTogether
“Even if you personally are so dissatisfied with life that you want the world to end, surely the cruel reality is that it will continue on, unchanging. All the better for someone perfectly content, like me.”
– Aya Shameimaru, Touhou Suzunaan ~ Forbidden Scrollery

Last seen: 2 hours and 39 seconds ago

Off to the races for another SMWCentral Music Tourney!

This level feels like multiple unrelated levels connected into one huge 10 minute long level with no checkpoints. Interesting challenge in a way, and the level's difficulty makes it reasonable, but I think you would have been better of submitting one part of your level and extending it a bit. I feel like the ending of this level is a bit sudden, probably putting a few Spinies at the end would improve it somewhat.

The escape the lava theme it's anything too new but you made it unique by adding in the boulders making feel more like a volcano rumbling and loosening rocks creating a cave in.

A pretty neat level involving eating blocks and baseball Chucks, not the prettiest one though what with floating munchers. I liked the Kaizo trap puzzle requiring scrolling the screen however.

Too much item baby-sitting makes this level feel too boring.

It's a weird, but a really cool level with a very unusual gimmick of putting sprites on rotating Ball'n'Chains so that they would move in circles. I think you did a great job with that gimmick that I would have no idea what to do with myself.

Modern Talking - No Face, No Name, No Number

There isn't much to say about that one.

This level is a spectacle and a joy to play. It's great how it switches up often while keeping its reoccurring elements.Legacy ports zip (now that those went down because Dropbox)
Last edited on 2022-06-28 05:04:23 PM by xfix

modern talking was a close third