Now, to bombard you with screenshots. What comes after the intro message. Riding a platform in level 4.

The plants of the East Island support silver P's. 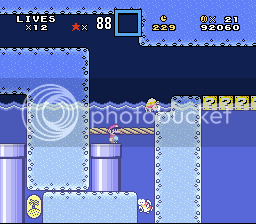 'Tis level 9 in all it's glory. (Scrolling transparent layer 2)

Oh look, it's angry water castle with a custom palette.

The same thing but much more annoying.

Going right will bring you here.

After eventually getting out of the ghost house.

After after eventually getting out of the ghost house.

I'm not saying that word anymore.

And that's all the level pictures I should show.
But I still have the overworld.

Some of those pictures may be outdated but whatever. Probably only the main overworld picture.

The old "Mario: In Desperation" thread can be found here. Whatever you do, DO NOT POST IN THAT THREAD.


Anywho, not much to say. The overworld is pretty good, though a little linear for my tastes. The screenshots you posted show decent to good level design, too.

Posted on 2009-08-08 07:06:58 AMLink
The hack looks pretty basic. There are not any problems present in my eyes. But I do feel that the grey cave could use a better palette edit. Also, I personally do not have a great feeling regarding the screenshot with Mario hopping over thousands of bullet machines.

Posted on 2009-08-08 07:12:22 AMLink
I know it's basic. Basically this hack is lots of Map16 stuff and small graphical edits. There is some cool stuff locked away in there somewhere. Keep in mind most of this is really old.

Oh yeah. I did realise that the title seems to say ninja turtles. I just suck with titles. The ninja part is just Fire Mario and the turtle bit is Koopas.
May we meet again outside the battlefield.

Don't give so much away. Screenshots aren't for posting all the spots in every level and where every door takes you. Give us a little taste of what's to come.

Unless you have a huge surprise waiting that you haven't shown us.

2. Why is caped Mario back to red?

3. Seventh screen - why bother? Is there a reason not to use silver coins?

4. Why a grey cave? Grey is a dull color, especially considering it's the usual SMW color. If you have a reason, I'll go with it, but right now I'm thinking you just named it "grey" to avoid the work of changing the cave... that's my cynicism there.

5. The orange and purple caves could use a little bit of pallete tweaking to make them more pleasant. Right now they aren't bad but after a while they will get annoying. Shouldn't be a problem if the rooms are only a few screens long.

Posted on 2009-08-08 08:12:50 AMLink
Originally posted by Mission_316
Don't give so much away. Screenshots aren't for posting all the spots in every level and where every door takes you. Give us a little taste of what's to come.
Good idea. Done.

4. Grey is the colour of the submap. I guess I can change the levels' palettes.

I did leave a lot of stuff out in the screenshots, but I did shove heaps in...

Also, this thread is for feedback mainly. I appreciate it.May we meet again outside the battlefield.