(dearmods sorry for the stretching)

Posted on 2009-11-28 01:38:31 AMLink
Originally posted by Aqualakitu
Originally posted by Captain Pissweak
Do you have a reason not to hate it? A valid one? Claiming it's bad because of peer pressure alone doesn't work.
You have no real reason to hate Touhou either. *runs*
Actually, I do. I've played it, and the gameplay sucks. That's why I mentioned it.</derailment>

Anyways, you still haven't given a real reason to hate Pokémon. Please elaborate.

Anyway, people like Pokémon because they like it. Some because it's fun, because of the story, the challenges, the battles, collecting pokémon, the music, etc.

I personally like the gym battles the most, always looking forward to the next one. The rival battles are also quite good, and the game's fun in general. 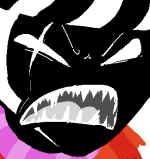 Posted on 2009-12-03 03:51:21 AMLink
I thinks it's because because they do cooler things like breathe fire while real pets crap everywhere and occasionally do a trick. Either that or it makes them feel like they've done something great.

Posted on 2009-12-03 03:56:14 AMLink
I still play the Pokemon games... well the neweer generation versions. My first and second gen cartidges are somewhat of a dust collector. Right now, I'm writing a crossover fanfiction called Naruto and Hinata The Pokemon Ninja.

... *Hates his laptop's small keyboard size... should have gotten thme to make it biggger... needs to buy a wireless keyboard*

Originally posted by Koopa Klaus
I thinks it's because because they do cooler things like breathe fire while real pets crap everywhere and occasionally do a trick. Either that or it makes them feel like they've done something great.
I would definitely buy a game where animals fight by crapping on each other.

This entire thread is opinions.

Posted on 2009-12-18 02:48:36 AMLink
Gardevoir is better than that damn yellow rat... especially when I write Pokemon fanfiction... so I like HumanxGardevior attention... o3o

Also, Pikachu is an Electric Mouse; so he was only stating the truth.

EDIT: I have some ninjas stalking me.

Posted on 2009-12-20 01:31:49 AMLink
Why do so many people like Pokemon?
Think back to the year of 1999, when the series made its American premeire on the now-defunct Kids WB.
I remember watching it every morning before school when I was 7 years old, until my parents got in a controversy with me and then I was forbidden of watching it.
Your layout has been removed...NOT! :D