Posted on 2010-02-19 05:03:49 AMLink
Yeah, as the others have said, it's a tad bland. At the beginning of the video, I recommend that you use land instead of cement blocks. I really like the title though.

Unfortunately, though, as of now, I think it's too bland for me to support. 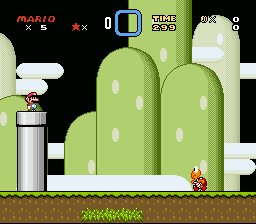 GET IT NOW OR DIE

To be perfectly honest, that was not a good hack at all. The level designs were dull, flat, uninspired, and not fun in the least.

Aotmeg Hills 1 just required two items, a shell and a P-Switch, to get through. If you fail to retrieve these necessary items, there are reset pipes, however, there is no indication that their purpose is for resetting. It's more obvious when you realize you screwed up the "puzzle" (and I use the term puzzle loosely as nothing even barely qualified for a puzzle in this hack) that they are meant for resetting, however, the player can unknowingly enter the pipes without having screwed up, and thus be teleported to the previous point for no reason.

Yoshi's House is simply empty aside from one lone message box. Hoorah.

Yellow Switch Palace was just pure laziness and no effort whatsoever. Just one coin-fraught room and the same switch room as the original game.

Aotmeg Hills 2 was an attempt for a fast-paced speedrun level with its low time limit. Unfortunately, the level suffered the same things as other levels. The strict time limit didn't help the repetitiveness and lack of challenging obstacles.

Castle: YES! I get to replay all five of those bland, tiring levels.

If this is your first hack, I'm sorry, I don't accept that as an excuse. Keep on working harder to make more interesting levels.

I wonder where that level name came from...