Edit: The hate stuff was really hard to avoid. That, with this monitor I have at the moment made it almost impossible to see anything.

About making a sequel, I would love to see another one, but if I try to make one, it wouldn't work to well.

I have nothing to put here, so I'm putting these filler words in until I can think of something that I can fit here. 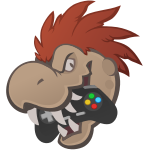 Whoamme got every ending!? Awww... I was hoping I could get one of them first.

Edit: I beat it. I got the best? one ending. I had 99 love and 99 laughter XP Also that boss was wicked hard. But fun at the same time.

I have a suggestion. About how you implemented the restart-room-when-you-die asm. You obviously know it's exploitable. Instead of finding a secret exit, you can figure out what screen it's on, bring an enemy to that screen somehow, and kill yourself to get to the next room. I did this once in the room that mention's Lizzy's garden. I was thinking if you changed it so that rather than activating the current screen exit when you died it activated a preset screen exit. You'd have to have a specfic screen, say screen 1F, and have that screen's exit reserved in every level to be activated when you die. This way the only way to advance to the next room would be to get in the pipe. Current Project: Puzzleshmup             Links: Twitter | YouTube | Mario Maker
Last edited on 2010-03-11 05:54:44 AM by vysethelegend47

Posted on 2010-03-11 07:05:27 AMLink
Congrats on beating the game! I'm Glad you enjoyed the boss too, I personally like how it gets harder as you go on, without me having to do any extra ASM coding. I'm only an amateur when it comes to ASM.

I wont be changing the ASM for Explore, but if I do another hack like this I will definitely do what you've suggested. If you open up the hack in LM you can see I plastered the levels with exits, which was very tedious, and your suggestion gets around that problem quite well. It also greatly reduces the risk of getting sent to 0.

For the most important exit (the one to the final boss) I cheat my asm by using a teleportation block. So all you reading this, ha! you can't exploit my asm to just skip the entire game, but what would be the point of that anyway. Youd miss everything!

I'm disapointed. I was hoping for awesome evil bad-***.

I ran into a problem though...I ended up in an endless level 0 bonus game. I'd do screenshots, except I have no earthly idea how I got where I got. All I can remember is, first I went to the level where it scrolls faster and faster and faster (Higher! Faster!), and I missed the first pipe and hit the second one. That took me to the dark-paletted level where it says "Lizzy takes the high road and Beth takes the low road". From there I went to the ice cave (This cave defies reality...Lizzy thinks it's beautiful) - obviously I remember text pretty well (thanks college Literature), but not much more, LOL.

Anyway, in the ice cave, I got to jumping around on the oddly-shaped floating ledges, and I went down inside of one of them, which was made of two very steep slopes. When I fell through, I hit the bottom of the screen, and instead of it taking me back to the start of that area, as per usual, it took me to the level we love to hate, Level 0/100...the Endless Bonus Game Of Doom.

Anyway. I thought you should know. I feel like I'm going to be spending a LONG time playing this game. I really, really like it.

My life has not involved SMW hacking for the past several months...I still love you guys though!
Enter the musical world of Moot Booxlé.
My last name is pronounced Boox-LEE, like...um...Bruce Lee. Check this out.
Funkatized layout courtesy of Awesome (aka Counterfeit)

Posted on 2010-03-11 10:20:49 AMLink
I've discovered the problem. Should be fixed when I do next release. Im hesitant to resubmit right now because of that message on the front page. Maybe after next weekend or whenever the flow of glitches stops coming in. I'm glad you're enjoying it though!

Posted on 2010-03-11 09:30:23 PMLink
The rabbit hole has a secret. It's found in the area where you fall down past all the doors.I have nothing to put here, so I'm putting these filler words in until I can think of something that I can fit here.

First, I like it when people do interesting and new ideas. It seems you are not going to stop with that.

It's just...all round enjoyable if you like linear or non-linear I guess. I don't know how it works, it just does.

To maybe break up the explore discussion a little, I also like the sound of your new hack. I recall a game maker game a lot like that.

Posted on 2010-03-12 04:33:03 PMLink
Yeesh.. I suck at finding the secrets in this game... Could I just go ahead and ask where in the rabbit hole the secret is? I've poured over every inch of the wall in the door drop and found nothing..

Posted on 2010-03-12 04:49:14 PMLink
Originally posted by legoman727
Yeesh.. I suck at finding the secrets in this game... Could I just go ahead and ask where in the rabbit hole the secret is? I've poured over every inch of the wall in the door drop and found nothing..

Posted on 2010-03-13 02:37:21 AMLink
Hugging the left wall when you fall will get you to where you should wait. Hugging walls might end up being useful in two of the next four rooms as well.

And mariofan thanks for the kind words =D. About my new hack, yeah I removed the info. OGS93 mentioned that Explore! sounded like a "Fable" styled hack. And though it has a bit of that in its endings, its far from being the SMW Fable. So now I think I want to make a choose your own adventure kind of hack. But I still kind of want to do the color based hack as well. So now I don't know what to do! Unless... I could somehow figure out how to do both in one! Or both at the same time.

Posted on 2010-03-13 02:47:29 AMLink
Maybe you could make the color-based hack on the shorter side, and have the SMW Fable on as a main project or something. Or you could do it the other way around, but the idea of a choose your own adventure in SMW seems to be more interesting then a hack about regaining color.Good fucking bye.

Posted on 2010-03-13 07:53:50 AMLink
Originally posted by GoldenSonic15
Maybe you could make the color-based hack on the shorter side, and have the SMW Fable on as a main project or something. Or you could do it the other way around, but the idea of a choose your own adventure in SMW seems to be more interesting then a hack about regaining color.

Even though I disagree with what's more interesting, I think that would make sense. I wouldn't want the colour hack to be long.

The cavern area, that talks about Beth digging for treasure. With the munchers and the bouncy blocks. Where is that secret? Find it, and I can get myself over to the Red Switch.. (I've gotten the Greed Yellow taken care of.)

EDIT: Neeever mind. Found it, still not sure how I got in there, but... Need the other three switches first. Whoops. :p

Okay. Red Moon area... How do you get the secret? I'm guessing it has to do with reaching the floating ledge platform thingy over the bottomless pit, but... sprite overload maybe? I don't see a way to get it. Do I need a flight power up? I haven't found one yet.

Posted on 2010-03-16 03:34:14 AMLink
Red moon area: Stand on the far Mushroom Platform before the normal exit pipe. Then when you get to the bottom of the screen, go over and get on top of the other platform. You should know what to do from there.

Posted on 2010-03-16 07:39:32 AMLink
In the ghost area, the spider webs are climbing nets. There should be a turtle climbing it next to the pipe entrance. Let me know if its not showing up. And feel free to ask questions whenever, I dont mind. This aint SPW3, although maybe its starting to feel like it?

Also: Version update. Very minor things, Fixed the bugs on the first page, hack removal log things, and updated map room graphics so now the map is much more useful. Added ASM to make you lose lives when you "die." This prevents people from farming the same moon over and over again in the guantlet. Not gonna submit to the site again untill a little later, still messing around with things.