Posted on 2010-03-30 08:35:29 PMLink
On your last video, the zingers and the barrels were too realistic with the foreground. I would personally recomment making the foreground more detailed, but you can do it the other way too.
Anyway, I like your level design too.
Keep up the good work.

Posted on 2010-03-30 09:16:57 PMLink
Thanks, CDPower, i won´t will disappoint you, i was going to make some custom Paper Mario ExGFX soon or later for my hack anyway, so whatever thing you need for me to do, just send me a PM, with the name of the Paper Mario game and Place/Sprite name, and then i could see what i can do. 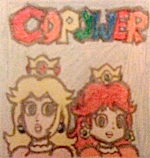 Posted on 2010-03-31 03:12:48 AMLink
I love all three of the Paper Mario games. And seeing their graphics being used here instantly grabs my attention.

That really looks good. Everything seems to be in a consistent Paper Mario style, and I like those Muths. Though, to be honest, I'd really like it if you could somehow make the Muths taller like they were in SPM. But still, very nice work here.

Posted on 2010-03-31 12:10:44 PMLink
ZMann: Thank you, and I am actually working on the GFX Routines to make the Muth taller to be 32x48. Also the wingless Goonie you see actually has wings, i'm just too lazy to go through the trouble to make it show as having wings in Lunar Magic.

Also may be an update today but may not be. Depends on if I don't gotta go to my grandma's for 5 hours which I don't want to.

Edit: Porting levels and other stuff over to a new rom due to New LM and patches I patched to the rom "fighting each other."

Hmm I think you stretched the page there.
Try putting a link instead!

Edit: Waiting til the REAL Lunar magic 1.70 comes out. Want proof it's april fools joke and you don't believe me for some reason, then go to page 8 and read my post that has a link linked to fusoya's site.