Posted on 2010-07-08 02:58:57 AMLink
Actually, yeah. I'd upload the TASes because that might give us a good idea on if there were any breaks that you found, and that's what some of us want to know.Why not go to my Youtube channel?

Posted on 2010-07-08 09:30:21 PMLink
The fate of the levels due to potential breaks is hardly my greatest concern, I'll release the TASes when the plans are complete. So I suppose I'll continue judging. SoulJester, I can only say I hope your levels don't pull off any bullshit. Obscure glitches are one thing, but having to re-do the entire level because I didn't get an item or I took the wrong path is another.

With the auto-scrolling, this is the lowest Mario can jump, and thus cannot get into that gap.

I am forced to spin jump between these two Thwomps. 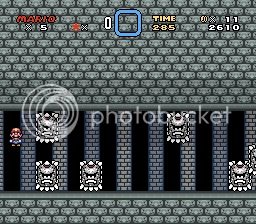 And thus must bounce off of these.

By the time I land, the next Thwomp kills me, and thus I cannot jump in the gap. 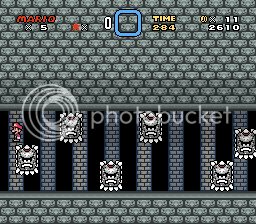 While if I spin jump off of that Thwomp, I end up too high, and Mario dies.

Bullet Bills are completely useless, and wouldn't help if I could reach them regardless.

After using the switch, two spinies fall, but they cannot be used to ascend.
World Community Grid: Thread | Team

Posted on 2010-07-08 09:35:41 PMLink
ya, about that, i can give you the solution to the tower part of the cave, that is the only part that you would really screw up on. I did that for panga so i dont mind helping you either. and i dont think the hard one has any bullshit like that.
This -->Click!!<-- This

Originally posted by Ultimaximus
[images and sentences]
Yeah, I was expecting someone to get annoyed at that part. It is possible, though, as I was able to do it on ZSNES.

It was mostly a rushed idea, but I figured it'd be fine at the time.
Especially since other entries are abusing tons of things like P-Switch jumps, which actually do require slowdown.
Professional frame-by-frame time wizard. YouTube - Twitter - SMW Glitch List - SMW Randomizer
Last edited on 2010-07-08 10:09:30 PM by Thomas

Posted on 2010-07-08 10:08:57 PMLink
"It is possible"? At exactly what point does Mario enter the next section? I dearly hope that this formation is standard in all playthroughs, and that I was not to rely on nearly luck-based sprite limits..
World Community Grid: Thread | Team

No, it doesn't require luck-based sprite limits. I've tested in many, many times, and I was able to get through it okay.

With the auto-scrolling, this is the lowest Mario can jump, and thus cannot get into that gap.
So essentially, Mario must jump into that gap. β\

Now what specifically makes this jump possible? Spin-jumping at every possible frame always results in death, giving me a very good possibility that the jump is impossible.

SoulJester, are your two entries meant to start with identical levels, with Puzzle Abuse having an unenterable door?
World Community Grid: Thread | Team
Last edited on 2010-07-10 12:27:36 AM by Ultimaximus

Posted on 2010-07-11 12:18:23 AMLink
90% completion has been achieved, but I'm at somewhat of a standstill due to the jump in Thwomp Fortress still proving to be impossible, I do not know how to proceed in Trial of Yoshis, and Puzzle Abuse seems to start with the same level as Savage Wastelands (both by SoulJester), with an unenterable door at the end of that section. Help is appreciated.
World Community Grid: Thread | Team

Well, for mine, I can't really help too much, but just give tips.

Run away from the back wall before the jump, then pull back into it afterwards. Experiment more with the left and right arrow keys and you should be able to get through eventually.

Posted on 2010-07-11 01:13:31 AMLink
Originally posted by Ultimaximus
and Puzzle Abuse seems to start with the same level as Savage Wastelands (both by SoulJester), with an unenterable door at the end of that section. Help is appreciated.

Think C|C.
Why not go to my Youtube channel?

you have to play two player, you can only get to the level (puzzle abuse) as luigi, that was the first part of the puzzle.

Posted on 2010-07-11 02:30:12 AMLink
Not much of a puzzle without even a riddle or something, involving something outside of the level, which isn't judged, and has been demonstrated to be unoriginal. β\
World Community Grid: Thread | Team

Posted on 2010-07-11 02:37:42 AMLink
Originally posted by Ultimaximus
Not much of a puzzle without even a riddle or something, involving something outside of the level, which isn't judged, and has been demonstrated to be unoriginal. β\

meh, i have a few reasons why it was necessary, but w/e. the puzzle really gets difficult in the third cave room. oh, and im leaving 2moro, so i wont be able to help you for a week, im almost positive that ownerthugz can help with it, but can you plz not post comments about needing help, and instead pm him? Oh, and dont pm him right away, the most of the difficulty in this puzzle comes from the puzzle, not really anything trying to kill you...

Last seen: 7 years and 1 month ago

ugh... dont watch it yet, only watch it if you need a lot of help. but you shouldn't need help at that part, that lp only gets through the easy parts.
This -->Click!!<-- This