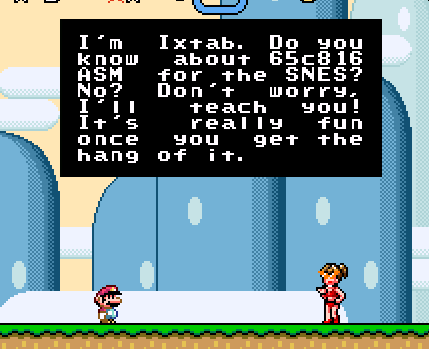 Hello. This is a hack inspired by Tails_1155 Hacks 101. The name is subject to change. Basically I will teach you asm while you play through levels. I need help with level ideas though. Here's what I got so far.

what else do you guys wanna learn? and new name?

Posted on 2010-04-18 03:02:19 PMLink
Wow, I'm surprised this idea hasn't come up before. This is a great one! Are you going to show types of blocks/sprites and say how they're coded? Or are you just going to have random messages teaching you ASM?

and also etting ninja'd by 2tacoREMOVED

I'm not good at naming though.

I don't have much planned out. The listing of the opcodes was just to show what's needed to make the certain sections, and they build up. So for example one level will start out teaching a graphics routine for a sprite, then later on I'll show nifty features you can do to it like make it move, interaction, etc.

Right now, I'm working on myself (in sprite form ). It'll be press UP to read next message, press DOWN to read last message and press X to end level aka skip. I just hope 190 message boxes is enough.

It's really important I know what you guys want to learn. I'm not going to be teaching dynamic sprites or intense patches like the co-op sprites. But I do wish to make this a beginner to intermediate tutorial.

How to make sprite 64x64. i.e that gigantic Mega mole and also etting ninja'd by 2taco


But anyway, this is really a great idea. If you need my help, please don't hesitate to ask

EDit: I was there when you first created the idea and encouraged you D:

Posted on 2010-04-18 04:13:08 PMLink
Well I'm hoping this can be completed, I would like to learn more about ASM and since you're good at it I'm pretty sure this hack will be helpful. Anyways good luck!

and then an advanced one with tips

bosses are the main thing i'd like to know, and how to use disassemblies to edit vanilla sprites

)
hope you follow through on it
EDIT: LEVEL UP! (i think)

Posted on 2010-04-18 05:27:22 PMLink
When I read the title of the thread/hack I laughed.
Yeah, this is a pretty creative idea, though, I don't know if it will be the most effective one, because while you're playing you're not seeing exactly how ASM is made, if that makes sense. For instance when someone plays Hacks 101 they would see that their is no cutoff so they won't put cutoff in their hack (in theory).

It's just, ASM is a much more advanced thing, and to learn it's best to practice over and over.

But, by all means, continue this project. It's without a doubt interesting.IRC Quotes (March 20th update!)

Last seen: 14 minutes and 33 seconds ago

Posted on 2010-04-18 05:52:28 PMLink
One thing. How to have Mario riding a flying and fireball breathing Yoshi for a level. And maybe something about auto-scroll.

In any case, it seems somewhat interesting. Eh, I guess it's the same kind of love for video tutorials that's being applied here. Sure, it has it's advantages, but can be overrated. I sincerely hope you justify this (perhaps unneeded) hype by having a high quality hack.
World Community Grid: Thread | Team

I will find this very useful, since it can show actual examples of the code in action while it teaches how to implement it.

Great jorb! I hope you finish it!!!

PS: Are you still interested in doing a bad ASM hack in my team hack?

My life has not involved SMW hacking for the past several months...I still love you guys though!
Enter the musical world of Moot Booxlé.
My last name is pronounced Boox-LEE, like...um...Bruce Lee. Check this out.
Funkatized layout courtesy of Awesome (aka Counterfeit)