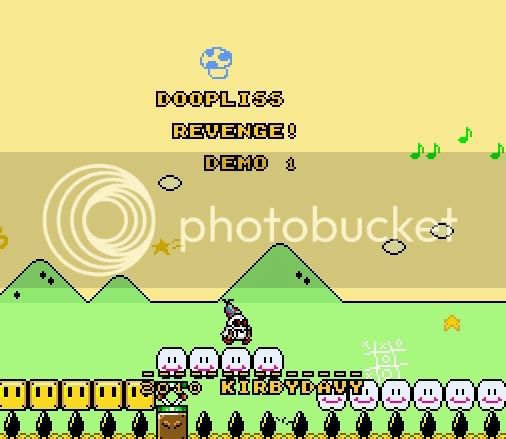 I could use a tester or two.. There might be some bugs I missed...
Anyways it includes:
-Custom GFX
-ExGFX
-Custom Sprites
-Custom Music
-A few custom blocks

It's kinda like a half Vanilla, half Chocolate hack.
Well, that's all...

For some reason I don't like the palette in the 4th screenshot a lot but I've seen worse elsewhere...

Publiée le 2010-06-22 04:01:55 PMLien
This hack looks great so far, since this is (technically) your first hack I'm really, really impressed. The palette in the 4th screen-shot is the only one I dislike, maybe you could use YY-CHR to remove those green spots in the ground, as they're really annoying me... I especially like the title screen and the rain level, you must of obviously put a lot of effort into them.

I think this is going to become a fabulous first hack, and I can't wait to play it.

Also, may I ask how many levels you plan to have in this hack?

Anyways, there's going to be 7 worlds with around 4-7 levels in each one.... so maybe around 50 levels? I not exactly sure.

Thanks again for the nice comments(I'm was really nervous that people were going to say it's bad..).

Also the demo is out, but I don't think the mods moderated it yet..

Hello there, my name is Kirbydavy. You must be Doopliss. This is my hut. You better get out of my hut!

Anyways, your levels seem very enjoyable for your first hack. Keep up your good work!
Now I need to change my old avatar. Or not.

But, since summer's here I thought I'd continue it!

Publiée le 2010-06-22 04:50:23 PMLien
I like the message, as it reminds me a lot of Popple from Superstar Saga. However, if you want it to be more gramatically correct, may I suggest editing it to this...

*"Hello there, the name's Kirbydavy. You must be Doopliss, but this hut is mine, so I'd get out if I were you! No? Okay then, here I come!"*

Anyways, kirbydavy, you've already given me the demo(like years ago), and it was pretty fun. I love Doopliss, he was my favorite character for PM2(well Puni beat him but eh). Keep it up ^_^

To comment on each screenshot:
screeny 1: I like the background, but the level looks a tad flat/boring.
screeny 2: I loved this level when I played the demo! But the background could use a better palette.
screeny 3: Looks pretty good to me. Maybe some decoration would be nice, though.
screeny 4: I really dislike the FG/BG palettes. I could show you how to improve them.
screeny 5: pretty good. I remember playing this..
screeny 6: again, awesome.
screeny 7: could use a custom palette, otherwise it looks good.
screeny 8: I remember playing through this boss! Fun stuff, could use a custom palette/decoration, though.Your layout has been removed.

Publiée le 2010-06-23 08:54:03 PMLien
Wow, this hack was accepted pretty quickly! The screens looked nice, but now I suppose I'll have to try it! Keep it up!you know that it's me that typed this because of my signature right here

Emm...This hack is accepted and I have to play it!

The hack is found in the hacks section, so go here for commenting instead.