darklink898's unnamed hack [Ask me for the demo] [Screenshots]

Posted on 2007-11-28 12:06:22 AMLink
I've been working on this hack for 2 weeks approximately.
Some people have already played it and I got good comments, but I wanna know how good is it before submitting something. I got a 1 world demo(5 levels).

First level, it's a river!

Which leads to the second level, a beach!

Then, you start climbing a mountain, and into the third level! 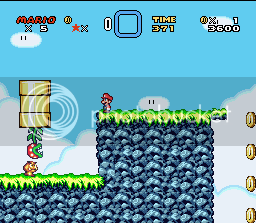 Next, you reach a suspicious castle. (With a custom boss (kinda) w00t!)

This castle has a secret exit, but the secret level isn't done, so don't try getting into it.

After the castle, you reach a house... It isn't finished, but the 1st area is ready. I got no screenshots, but it's on the demo! Download the demo here: Click!

Last seen: 16 minutes and 45 seconds ago

Posted on 2007-11-28 12:37:31 AMLink
They are fine, it's just that I don't know where to take the screenshots. D: And yeah, all those GFX are ripped by myself, except for the ones on the 3rd screenshot (Ice Man ripped them) and the ones by icegoom.

BTW, I got a userbar for it! Here's the code:

Posted on 2007-11-28 01:27:50 AMLink
I have not played it yet because im on my laptop but by the looks of the screen shots it looks cool especially the foreground. When I get on my computer ill download it and play it. Im also supporting it

Check out my profile for awesomeness!

Triforce Island is still under progress, it's just we don't have enough to show yet.

Posted on 2007-11-28 02:48:40 AMLink
I played and finished it. A lot of things I liked such as the foreground and background, graphics, boss and music (except for the castle music. I dont really think it matches with mario ) It was good well worth finishing. For a story how about:
Mario was invited to a mysterious Island by a mysterious person. When he arrives he finds it was a trap to kill him. Mario know tries to find a way of the Island when he notices something evil and dark about the Island. Mario decides to explore the Island a little.Check out my profile for awesomeness!

But he does notices something dark and evil about the island... Muahahahaha! I already got an idea for a boss. >

Posted on 2007-11-28 02:58:36 AMLink
Then how about:
Mario was enjoying his alone cruise when his boat hit a mysterious island. Mario tries to find a way off the island but while at it he discovers something dark and evil about the island. Mario decides to stay and explore the island.

Have you played resident evil 4? you know how the story twists in 3 different ways? You should do that. Go from finding a way of the island, to discovering a hidden evil, to having to fight to get off.Check out my profile for awesomeness!

Posted on 2007-11-28 03:43:59 AMLink
Excellent work, Darklink898. The hack is well done. My main complaint is some of the choices for your music- Koopa Beach doesn't really fit such an active level, and the Cabbage Mountain music gets repetitive after a while. Aside from that, it's all good. As for the story, I really kinda find shipwrecks overused. How about this?

Bowser, as usual, has kidnapped the princess. Mario is just about to rescue her, when Bowser uses the power of *insert magic thingabob here* to transport Mario to a dark and evil island far away from the Mushroom Kingdom.

This would not just allow for a good opening story, but would also be great for being able to make the story progress as you play the game- Mario could learn more about the strange new world he's in as you play.

Cons:
-You used Chuck in levels. This causes nothing but cheap deaths. Remove them for a more fun game in general.
-Where's the secret exit in the castle? I can't find the key.
-Second room in the last level is glitched.
-Slowdown in many places.Your layout has been removed.

That's not a con. <_<
Kill all the enemies on the last screen of the first part of the level.


Originally posted by pieguy1372
-Second room in the last level is glitched.

Not glitched, but it isn't done yet.

Originally posted by pieguy1372
-Slowdown in many places.
That got an easy fix.

I notice a triforce, which makes me think about a certain island in the Zelda series.

Lincoln the Penguin is a cousin of the Kahoolint(SP?) Owl. The Penguin has wrapped up some fabulous timeshare deals at Koopa Hamlet in the country. That timeshare deal involved two spies who wanted to defect on a vacation plot at Koopa Hamlet, King Koopa's personal residence. Little did these two know that they had stuffed mushroom caps with Mario and Luigi, small form, stuck inside them to gain access as part of diplomatic relations.

Unfortunately Lincoln has noticed Mario and Luigi and has called upon a whale(the dream whale from Link's Awakening) to bash a boat as they were sailing to Koopa Manor. This boat was capsized destroying the two, Neppy Fungae and Hepur Koopa two spies, and leaving Mario and Luigi on Kahoolint Island. Why they got there, nobody knows.

It is deserted and the only people on there are monsters. It seems that two years ago Bowser bought the island and the Link Museum(afterall the people of Kahoolint must've loved Link as a hero enough to make the museum after the Shells that Link used to get his great sword) and committed murder against all of the island people. The only people to stay there were his minions and the head owner of the Link Museum, who killed himself when the island was taken over. Since Mario didn't know anybody at all, he presumed that the island was an unknown charting destination, related by a savage unknown enemy.

Why did Bowser take over that island?

Bowser was a great fan of Link, the sword fighting and the chivalry, but believed that Link was too much of a challenge for Gannon, Link being a paid hitman and all. In fact, there is a statue of Link imploring that Link is the hero of the Koopa people also. Instead he recruited Gannon's step-son Cannon AKA Idle Wild to patrol the island in search of Mario, and he(Bowser) left back to the Koopa Kingdom, hoping that Mario would reach the island.

On the previous note, Bowser also felt that the townspeople didn't care enough about their history. The Link Museum was in a poor section of town and there were no books about Link. Bowser killed almost all of them for his zealotry in making Link's name to be known.

Bowser also hated Gannon. He feared that when the Nightmare came, that Gannon was a part of it because Gannon's family and Bowser's family didn't get along. Being a personal friend of the Link from Link's Awakening and admirer, he has made sure that Link was bankrolled to the hilt to fight the Nightmares, which included sensitivity(that is why he pretended to be knocked out, and also pretended to not know anything about the island).

He felt that the sympathy would owe Link a great deal to the island to fight and kill the nightmares. Unfortunately for Cannon, he doesn't know that Bowser is against the Pigg family. He just knows that Cannon has been called to get rid of Mario.

While waiting on the island, Idle took an owl that belonged there and converted the owl to his side. Knowing that there was a cousin who sold timeshares, he convinced the owl to call upon Lincoln to plot for Mario to come on the island. Knowing the schedule, Lincoln did what he did.

So what surprises will await Mario on Kahoolint? Will he face the same baddies that Link faced? Was this a way to distract Mario from Bowser or to act as Bowser's hitman? Why would Bowser detest Gannon, and why is this another useless fanboy spin-off?

Very lengthy, and rambling but you get the idea. The island is Kahoolint, Mario is Link and there is a new evil villain set up by Bowser to kill off Mario.

Title? Foggy Morning In the Aftermath(referring to the daze and confusion by Mario awaiting his turn to Koholint Island)

The Feared Visitor(referring to Cannon(Gannon's stepson) fearing Mario. afterall Bowser's intent of Cannon ruling the island, was to serve as officer of the peace between the citizens of Koopa Kingdom)

The Grim Reaper and Him

One False Move(The shipwreck was the false move)

Pigs That Can Fly

The Missing Link
I am not a hacker by trade, I am an observer and I can be very observant. I tend to lurk around here to prolong the good experience of playing the original SMW. Whatever can add onto it is something that I will definitely do when I am bored which is often. And I will rarely post and give praise when needed to the hacks that may make me interested to relive memories.

My worst enemy in Mario isn't Bowser but my controller that keeps on getting disconnected from the inside. Might be my memory count.

(Some people say the music is great and some others say it doesn't blends. o_O)
@Mericles: I read through all of it various times. It's good stuff, but I don't really wanna mix characters from different videogames...

@MiniMonster: Thanks, but I don't think it's that good!

Anyway, I ripped a new tileset for it yesterday. Its from Kirby & the Amazing Mirror! (Some of you might recognize it because I think it has been used in other hacks...)

That's all for today. And I still need more suggestions for the plot.

And if some of you knows about a good game that has a similar GFX style, please tell me!

Posted on 2007-11-30 03:23:24 AMLink
OK, I did figure that your other hack, Dark Link, already dealt with the cross-over theme. I hate to sound silly but the landscaping reminds me of Kirby's Adventure, or Kirby's Dream Land. The idea of square green lawn blocks just smacks all across the Kirby board, besides the Amazing Mirror.

OK, I will try to give a plot that has nothing to do with Link's Awakening. I personally do not want to know the bosses until I play it, but giving us hints on the end boss would help move a plot idea forward. BTW, I love the look of the hack.

Between Triforce Island and this, there might be some tough competition. Especially with the screenshots reflecting a beach, a bright colorful climb to a castle. I am not a hacker by trade, I am an observer and I can be very observant. I tend to lurk around here to prolong the good experience of playing the original SMW. Whatever can add onto it is something that I will definitely do when I am bored which is often. And I will rarely post and give praise when needed to the hacks that may make me interested to relive memories.

My worst enemy in Mario isn't Bowser but my controller that keeps on getting disconnected from the inside. Might be my memory count.
Last edited on 2007-11-30 03:25:27 AM by Paternal Christylemas X