Posted on 2011-07-06 12:51:13 AMLink
Hey, now there's an idea! I like to collaborate with little things like that, so ya have no arguments from me there. I've already thought of a way to incorporate that proposal, actually, and it seems like it'd be a fine fit. I'll probably put a bit more priority on getting the resources all finished up and sending them to S.N.N., so you can make use of them vent blocks/graphics in the next base update or two.

Posted on 2011-07-09 03:52:15 PMLink
The more I think about the name, the more I feel Velocity Valves works out just fine. If anyone has any other ideas, preferably also starting with V, I'd love to hear what ya might be thinking!

Other ones I thought of:
Valve Valley
Vic's Valves (no, self-promotion in a community hack is bad)

I say stick with your name, or go with Valve Valley. Thinking of v words is difficult, especially two that go together.Just back here to browse a bit.

Posted on 2011-07-09 06:21:30 PMLink
Gotta say, music track 6A sounds a ton better for the theme of the level. I love that track! The odd noises caused by jumping are sort of gratin' on the ears, however. I can't remember if that was supposed to be fixed already, or if it was still on the to-do, but I thought I'd mention it here.

I have a small question about graphics, also! Would there be any objection to keeping my spare tiles (occupying a 16x16 square in the end of the GFX file) in FirePhoenix's girder set (they go with the set), or are those tiles reserved for other purposes? The difference of having to relocate those tiles or not is fairly negligible, but if I can get away with keeping them where they are, that'd work well for me!

Also, I realized I am kind of a bonehead, as when I submitted my blocks, I never gave you (S.N.N.) the acts-like settings!... Though, they are fairly obviously all supposed to be set to 25 (the less-obvious sprite killer as well), but I still overlooked that detail, so shame on me!

Posted on 2011-07-09 06:30:19 PMLink
I've sent 6A and another fresh batch of tracks to Kipernal, so once he's done with them, the noise issue will be fixed. And to answer your question: no, there are no reserved tiles in the girder set, so you're welcome to keep yours there.

Also, thanks for the acts-like settings. I actually just finished inserting them into the base ROM (which will be up in a few minutes) as tile 25, so everything seems to be in working order.

Posted on 2011-07-11 09:44:32 PMLink
So, I went to get a background requested, and like two seconds later, here I am with a completed one! One hundred thanks to MSAhm3d59113 for the initial graphical files - without those, I'd probably have taken over a week to get to about this point myself! I did modify them pretty heavily from the state they were in, however, but I'm much better at working off of something than starting from a scratch paper, so his work helped more than ya know.

Looks pretty good if ya ask me! I'm quite fond of it already... Here's a look at the editor, for those interested:

I might add a more green tint, to distinguish it more as pollution than generic storminess, but it fits pretty well as-is, I think. I'm considering throwing on a satellite dish or perhaps a radio tower onto the background factory as well. Thoughts?!?

Posted on 2011-07-11 09:59:37 PMLink
For some reason, I'm reminded of World of Goo. It's simplistic, but I like it quite a bit and I think it works well here. I'd like to see a radio tower on the other hill though - I think it would be a nice touch, and enhance the "industrial" feeling of it.

Great stuff. Glad you got the BG after all.

Posted on 2011-07-11 10:11:15 PMLink
Originally posted by Lightvayne
Some Layer 3 "falling ashes" effect, would be pretty awesome also as just an idea. I like the BG though, it fits pretty well.

Oooh. This is actually totally possible if we use the falling leaves cluster sprites.

...then again, this level is already great enough. If we add anything else to it, people will just end up keeling over and dying from too much awesomeness in one level. Maybe we should use the falling ashes in another level or something.

Posted on 2011-07-11 11:03:50 PMLink
I was thinking of using layer 3 here, but in a different way... falling ashes sounds pretty darn awesome, though, and I'm now reconsidering! What I had in mind was more or less smog on the top half of the level, reducing visibility ever so slightly, and giving off a more polluted, "Wow, the property value of my mushroom house sure has dropped since these factories popped up. Might have to stop giving flowers and stars away to any passing plumbers!" sorta feel (if that's a feeling that was even ever felt!).

I'd hate to be a glory hog with all this nice stuff going on, but at the same time, I like the thought of no-limits, and making it as great as I can! That was in the fine print of the contract when I signed up for the project, right...?

Besides, if some slack-jawed smart-aleck with an insatiable lust for rambling can make something of high quality, it could actually boost motivation to strive for unique concepts elsewhere!

Posted on 2011-07-11 11:57:50 PMLink
I was going to mention it before, but I also get a World of Goo/ Super Meat Boy vibe from the background. And yeah, something on the other hill might be nice, but overall it does have a nice, simple feel to it.

As for layer 3, I'm actually curious to see what either of those ideas would look like. Hey, why not make it as memorable as we can?Youtube (Main) | Youtube (Alt) | Bandcamp | DeviantART

Posted on 2011-07-12 12:16:11 AMLink
Hmm! There seems to be a problem with color fading on the victory march! I was under the impression that this wouldn't be the case, so I used the whole of palette 0. Is there a plan to fix the fadeout to include all colors, or should I get to work on rearranging the palettes?

Anyway, all that's really left to do aside from a little more sprucing up for the background is to make graphics for the bomb thrower fella dude's dropoff point (he's supposed to be throwing them into a pile of Bob-Ombs labelled as an explosives cache)! I'll figure out how to work with layer 3 stuff as well - it's something that has always fascinated me, but I never buckled down and just learned it! 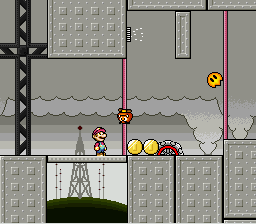 I got this by accident. I was curious on what that vent was doing up there, so I tried kicking a goomba upwards to see what'll happen.

But it got stuck with that bounce sprites only block.