The palette is probably handled some properties within the ASM file itself, assuming it can't be edited through the CFG Editor.

Replacing the properties to this should set it to palette C. I didn't realize that was set in the ASM file, because I hadn't gotten around to changing the graphics routine yet. Sorry!

For the sake of this post and the lack of better judgment on my part, I'm going to pretend Tom never said anything.

- The lower ledge (what Mario's standing on) should have a proper edge on it instead of connecting itself into the higher ground haphazardly.
- Add a ceiling generator to the entrance of your level (Sprite D0). Anyone with a cape can easily lolfly to the midpoint as well as expose some nasty cutoff you've made.

Tone down the darkest blue on this pipe and do it for all of your sublevels.

Think fast. Mario runs a great risk landing right in front of the Blurps below, if not outright drowning.

Too empty; add several more coins to this area.

- See second screenshot.
- The top pixel of the bottom row can be seen in Snes9x; and I don't know if it'll hold true with bsnes as well. Fill it in with the pipes and dirt.

This is why I shouldn't wait a day or two to post these damn screens. (Forgot why I took it!)

Oh yeah, now I remember. This isn't for you, but perhaps could we edit Ted's X speed so it's the same whether he's going left or right?

Shift the midway to where it's before the exit pipe dry land. (Move it to screen 5.)

Move this message box to where it's closer to the pipe that leads to sublevel 45. Readjust the level terrain if you need to.

Gonna have to play through this part again so I can remember why I took this screen.

I'm personally not a fan of having the player essentially play through a full level twice just to get both exits (didn't really like it in the original SMW as well), but if you insist on doing this; how about having the player have to do a little extra just to get it? I dunno, perhaps block the route off with ON/OFF blocks and have Mario have to find a switch so he can get through? That empty section in the water screen I took could prove to be helpful.

For the water portion, since you're currently using the vanilla water song, how about using the Water-1 track? Hydrostatic Halt uses it if you need an immediate reminder.

There exists a floor generator for water level for issues like shown in the video. Thing is that this particular level uses the swim under the floor for a bonus thing (though, a disappointing bonus that doesn't even have a 1-Up :C). And plus, there currently only two levels I can think of that would benefit from a floor generator, this level and Kourai Crevice (and I don't even know if the floor generator would work for a level like Kourai, as there it's more of having the ability to fly under the level with Yoshi.). So yeah, I don't know if another sprite (and block) slot calls for this.

Also there's supposed to be a 1up in the bonus area iirc, there's either an invisible block or those secret 1up points. I don't really remember and I'm not in a position to check.

But I gotta say whoever decided to add the cherry blossom petals to the first area, it looks great. It's a very neat effect.

-NOTICE-
Fishing of Porcu-
puffers is halted temporarily, as
they have devel-
oped an immunity to fire.

Fixed palette for Level 4B

And yes, there is invisible blocks next to the pipe in that underwater secret area. 3 coins and a 1up.

Posted on 2014-06-15 09:15:02 AMLink
So I played through the level recently and, hoo boy, it's gonna need some work. Me 3 years ago was nowhere near as good at level design. I'm gonna hold off on making changes until the alpha playthrough catches up to this level though, since I'm sorta lost on some changes I could make other than slight adjustment of enemy positions.

I have pictures of things and comments about things that appear to have changed in the level (globally?) that are somewhat out of my control though.

-Pionpi don't die in two hits anymore? It makes them a much more dangerous enemy. 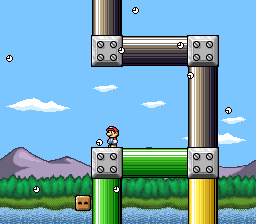 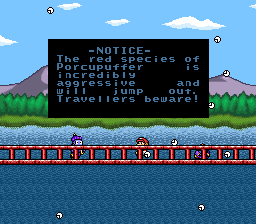 This message box says the wrong thing. This message should appear in the second one in the level (in the underwater section) 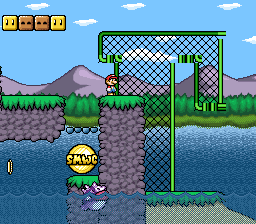 This is a tileset error. They still work as intended. Were the global graphics mucked with? 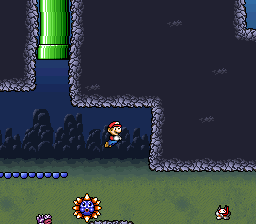 The scuba ninjis are the wrong palette. Was their palette changed? If not I'll fix it when I fix the level. 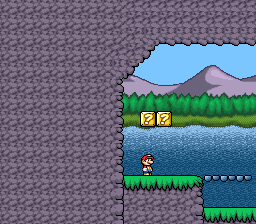 The midpoint places you here rather than underwater where the midpoint is. I remember it being mentioned at some point that this could be fixed with the multi-midpoint patch? 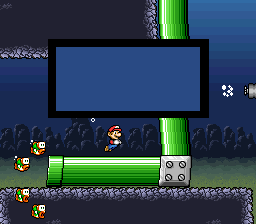 This message box should display the message from the earlier screenshot.

Otherwise, the mini puffers look kinda weird using the same palette row as the full-size puffer. They might need some work. 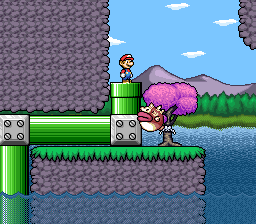 When I fix up this level I'm gonna mike his lips orange or whitish. He's supposed to be reminiscent of boss bass cause he jumps :V

This is known. Lightvayne will need to change one simple value in the cluster sprite's ASM file.


Originally posted by Teyla
This is a tileset error. They still work as intended. Were the global graphics mucked with?

Mistake on my part. Can be fixed easily.


Originally posted by Teyla
The midpoint places you here rather than underwater where the midpoint is. I remember it being mentioned at some point that this could be fixed with the multi-midpoint patch?

Was never reapplied, but when it is, it should plop you back to where it's supposed to.