Posted on 2011-09-02 12:34:45 PMLink
Greemish deserves most of the credit for that, honestly. It's one thing to say, "You know what would be awesome? A tileset that looks like a cross between the Shipwreck Coast and Hạ Long Bay, with not-yet-ambulatory, juvenile Pompom Flowers on the highest cliffs!" and another thing entirely to actually draw it, and to assure thereby that it is indeed awesome.
Last edited on 2011-09-03 03:28:51 AM by Rameau's Nephew

Concerning the title of this level...I quite liked the one suggested earlier in this thread ("Fushigi Fricass-Sea") insofar as it captures both the mysterious and goofy aspects of this level, but it strikes me as strange to use a Japanese word in the title of a level whose style is a bit more strongly Chinese-influenced. However, "Shénmì Fricass-Sea" would mean pretty much the same thing, and while it's not alliterative (though technically the other one wasn't quite alliterative either, as the alleged f was actually a voiceless bilabial frictive in disguise), it does rhyme, and I sort of like the two-three rhythm, myself. What do you cats think?

The limit is 19 (unless you use some odd patch that reduces this).<blm> zsnes users are the flatearthers of emulation

Posted on 2011-09-14 10:01:31 AMLink
Concerning the title, I was also under the impression that the limit was 19 characters; however, if a lower one is imposed (which is perhaps not the best idea in a hack which various restrictions are already placed on titles), I could simply go with "Shénmì Frica-Sea" or some such. The tonal markers, similarly, are not completely indefensible (though they would of course be a nice touch if possible), as it seems to be common practice to omit them even on some official signs and scholarly works, despite the ambiguity this causes.


Another IPS, me hearties.

- All graphics have been inserted in more or less their desired form. If you see something you think could bear some touching up, however, by all means say so.

- I trimmed/merged a few rocks in the first area, which probably doesn't affect the overall length all that drastically, but nevertheless makes things flow a bit better. I'm currently debating whether or not I should also merge the first two screens (i.e. the ones before the artifacts appear) of the second area as well, as they're probably the least exciting part of this area, the safest to remove without screwing everything up, and were in part made for the now-redundant function of harmlessly introducing the circling mini-puffers. Or is indeed better from an atmospheric perspective if we linger a bit longer in the more normal-looking watery area before the secrets of the deep start to reveal themselves? We'll see what the public has to say.

- Old MacPionpi's Life Farm has been shut down due to health code violations. His strange floor/wall interaction (as is also seen in other levels featuring the sprite) is still present, however, and would indeed require the assistance of someone far more skilled in the ASM field than I am to repair. Perhaps I'll post something about it in the resource request thread, though I'm not so certain such a thing is likely to receive much attention (the current policy seems to be that requests are only fulfilled for people who aren't actually planning to finish their levels). Just chalk it up to crazy jiāngshī powers for now.

- The second and third SMWC coins suffer from the infamous vertical level bisection bug, though I understand that the official party line is that this phenomenon does not actually exist, but is rather a treacherous phantasm of our fevered minds. Welcome to the madhouse, in that event.

Posted on 2011-09-15 05:58:47 PMLink
I was so worried about the oriental world being the worst when we finalized the categories. It seemed like the most inflexible overall. Levels like this, Hadron's, ST's, and the others, have proven the exact opposite.

This is a wonderful level now, and I had a great time with it. I'd almost go as far to say it's in the top three for "most atmospheric" in this hack so far (with Rusted Retribution and Digsite Dangers reaching the top of that list as well).

Even though the coins take away from the blind fall aspect of this area, I still think this is a rather ill-placed sprite. It is more than possible for the unsuspecting player to get smacked by him on the way down.

If you come from the right, it's actually quite possible to miss this midway entirely. Might I suggest shifting it a few tiles to the right and down so it's pretty much on the main path?

It might be worth moving this block to right outside this room (back to the second area). The whole "mushroom going behind layer 2" sort of ruins an otherwise perfect atmosphere.

When I came down this shaft (third SMWC coin room), I was immediately struck by one of the mini-Puffers. I tried it again afterwards and they seemed to take a bit longer to spawn, but the fact that there is a possibility you could get hit upon entry might warrant a movement.

As for your inquiry about the second area: I'd say leave it as it is. I really like the "progressive" nature of the artifacts as they are right now, and changing that around might ruin that sense of flow.

Oh, and before I forget, "Shénmì Frica-Sea" could work. There are a few layer 3 tiles we could replace to fit the accented letters in.

Posted on 2011-09-19 12:30:53 PMLink
Noted and corrected. This version here addresses all of the above issues, as well as making a few other minor tweaks (including a new way of doing the temple doors, inspired by my fooling around with a solution for the powerup issue). A few notes:

- For reasons of submission-friendliness, the midpoint bar has been intentionally removed in this version; this is because I am planning to use a multi-midways patch version to deposit the player directly in the second part of the level, and my method for duplicating this effect by conventional means in the previous version required my illicitly borrowing a secondary exit which I had not laid claim to (nor intended to claim). But rest assured that the midway entrance will deposit the player in the same location as it did last time (i.e. in the vicinity of the midpoint posts, which are still there, albeit shifted slightly as suggested above).

- The title does not yet feature the tone markers. But that's hardly surprising considering the characters featuring them aren't in the ROM yet, no?

Otherwise, I'm pretty much satisfied with the version presented here. Let me know what you folks make of it.

Posted on 2011-09-22 01:03:34 PMLink
So far its great. The only issue I saw was the clouds and the sky surrounding them in the first area have a slightly different color then the rest of the bg. Also there is a bit of cut off on screen 01 with the highest pillar, but otherwise your pretty much good to go imo.
Layout by LDA during C3.

I'm not sure exactly why that tiny difference around the clouds even existed in the first, considering the two colors there had completely identical RGB values (I suppose that fact that one of them was the background color and one not had something to do with it?) Not too difficult to replace the single-color sky tiles in order to get them to match, though. 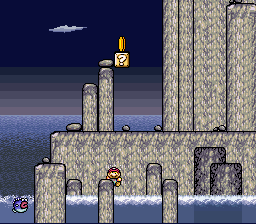 I got accidentally stuck and killed between that multi block and the ledge. Shenmi Frica-Sea 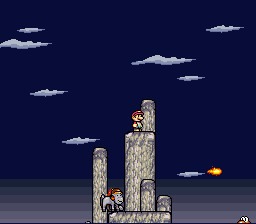 The Gao only turns around when Mario is right beside it - like really right beside it. I'm not sure if that's supposed to happen - was it even the Gao that turns around? Or was it the snake?
Last edited on 2012-12-17 12:49:51 AM by Frost

Posted on 2012-12-19 03:26:30 AMLink
I'm still completely flummoxed as to how how managed to perform the action in the first screen--do you by any chance remember the circumstances? As for the second; yes, that is indeed intentional, and the reason the Gao was chosen rather than the Nyololin (they get far too vicious otherwise).