Posted on 2014-05-16 01:52:27 PMLink
Hmm, that background in the third and fourth screenshots seems familiar. Did you perhaps use part of Oil Ocean Zone's background?

Foreground is a custom sewer FG by Catezeey (it's on a spritesheet he even posted here) and a custom conveyor belt by Kopejo (spritesheet's on MFGG). Background is from Oil Ocean.

Posted on 2014-05-16 10:54:44 PMLink
Everything I see is pleasing, MrDeePay. I usually don't play hacks with redrawn graphics, but by the pictures I'm watching I'll give this one a try whenever a demo gets released.

Posted on 2014-05-17 01:45:48 PMLink
I think MrDeePay's hack is an exception to the hacks that use redrawn graphics (I do not like those graphics). Great work with providing a challenging environment and nice consistency regarding the design of the levels. The other graphics seem quite good as well.

Posted on 2014-05-17 07:44:39 PMLink
I like the idea of using power ups as drugs since I've never seen anybody do this. Being honest, I'm pretty curious to know where this is going; Hopefully you'll show us some more.

Heh, funny gimmick!
It was used in VIP6.
The progress is slow, but the hack is nice.

Heh, funny gimmick!
It was used in VIP6.
The progress is slow, but the hack is nice.
There's a VIP 6?

On the subject to Giant Thwomps, I decided to make them less pixelated and more detailed:

What can I say? I like things to have more quality in them.!!! YOUR SAMPLES ARE COMING SOON !!!

Posted on 2014-05-18 07:09:04 PMLink
That IS a great giant Thwomper. Way to go on that, I really love the detail to it. The most amazing thing is the fact that it looks like it actually belongs in the vanilla Super Mario World. That itself deserves cudos.
Why hasn't anybody made ledge grabbing and crawling ASM yet?

Posted on 2014-05-19 02:10:47 PMLink
Actually gotta agree on that, it's terribly hard to make huge SMW-styled graphics because the game just doesn't lend itself to big spaces, because detail tends to not fit the style (sounds weird, but most sprites have 0 detail past their standard features).
Nice work.Your layout has been removed.

This is just a quick little view on my first level. It's a mini hack so there will only be about 5-6 levels. Basically someone is getting revenge on Mario for an unknown reason. Who that person is will known when you actually fight them. How am I doing so far?

From: In west philadelphia born and raised

Posted on 2014-05-19 11:43:29 PMLink
I made an overworld yesterday and wanted to share it. Any comments or suggestions for improvements are welcome! 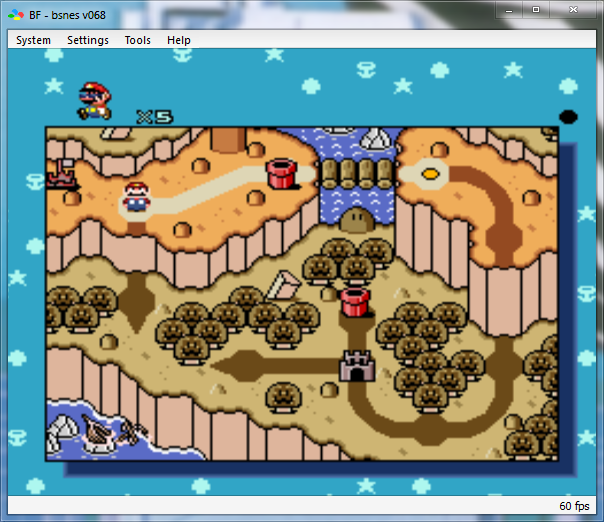 this is the music by the way

Nice looking overworld! I like the choice of palettes you chose for most of the terrains, but I have mixed feelings when it comes to Mario's palette.. ..he looks too dark compared in game.