I like using vanilla resources in ways the vanilla game never did. Like transparent layer 2 with sprite buoyancy enabled to make Mario-only blocks.

Posted on 2019-06-22 12:42:31 AMLink
@ Flagpole1up i really like your colours!! the bridge especially is a nice yellow! I'm usually not a big fan of overly detailed character sprites because sometimes features get lost and are hard to decipher as anything but discolored squares, but I think your characters hair and costume look great! Just, the face is a little off...to me, at least. the blocks also look kind of menacing being shrouded in shadow like that lol, but i think they look good!

@ gregor I love that water effect and the tiny little starfishes! beyond that i dont really have anything to say about it :o

@ ft lol you're always so good at coming up with wacky ideas. not much to say because static images can only say so much.

@ waffledoctor87 that slowdown is ridiculous! i cant see how you can play a level with that much slowdown holding you back. i dont really get why the blue lava is there at all if you're also going to use red lava, too. i did like the ending quit a bit though, i didnt see it coming myself heh
i guess its kind of cheating to show this off as I have no current intentions of finishing it, but as a vain person i need to make sure more people see it.r̲̲̲̲̲̲̲̲a̲̲̲̲̲̲̲̲t̲̲̲̲̲̲̲̲s̲̲̲̲̲̲̲̲p̲̲̲̲̲̲̲a̲̲̲̲̲̲̲̲w̲̲̲̲̲̲̲̲n̲̲̲̲̲̲̲̲
madeulook

Did you used the Level 24 for your level?
I know that the Level 24 can cause the player go in random areas (Chocolate Island 2).

Did you used a patch or something?

slowly working on a yi styled hack with killroy still
level 1 is finished, the overworld is almost finished, and levels 2 and 3 are very close to being done. might make a thread about it soon. 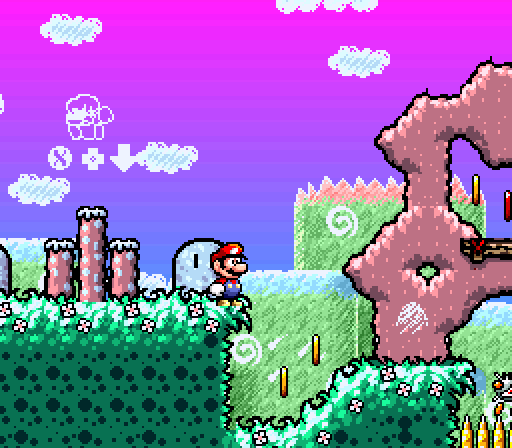 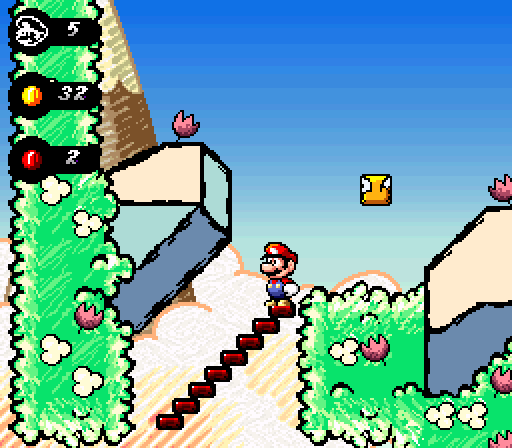 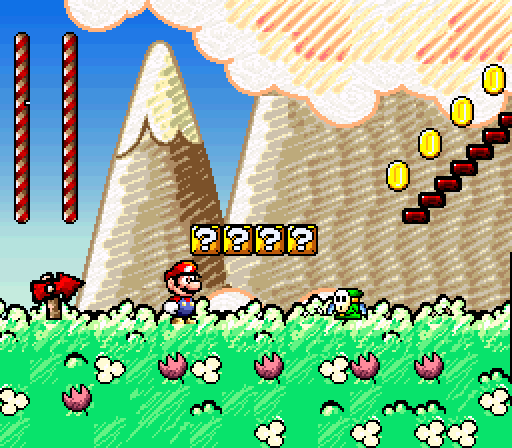 Bizarre Cave was a level made in 2016 for a cancelled collab. You can download the .bps here, if you want.
"If you imitate someone, you can never surpass them." 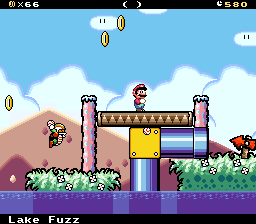 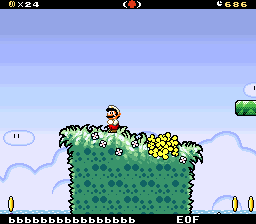 Looking from the gameplay, this stage looks very interesting; I really like the idea of latching onto hooks and their usage in fast-paced sections is really neat. There are some issues that I do want to point out, though; the graphic used when Mario is on a hook is a bit odd, the paths of the moving hooks could be shown with a graphic, and the stage could benefit from having some enemies to deal with occasionally. But besides these issues, the stage shows great promise. I hope the development of this stage goes well, and that you are able to make the ideas that you have for this stage real.

I'll see you later, and I hope you have a good day!

it's supposed to look like DKC2 when diddy's on the hook.

i thought of line guides, but i was kinda lazy about it, and i thought they were unecessary. maybe...

in this particular hack levels are build around a set number of mechanics or enemies (usually 2), one is introduced in first part, then another, then they're mixed together in following parts. it may seem limiting, but these mechanics are flexible enough and i'm pushing their creative potential to the max, so i don't use traditional enemies. this just so happens to be the only level to not use living creatures as obstacles, see gifs above.

it's supposed to look like DKC2 when diddy's on the hook.
diddy has a tail tho

Posted on 2019-12-23 06:06:18 AMLink
Originally posted by Midorizou Daze
Time to get back on topic, friends.
Not sure if this is finished but stil
I already commented this one on discord, but I really like the general design and especially the aesthetic. I think you mentioned that you were still missing a custom sprite on the first half and I can see that as it looks a bit empty right now, but other than that, looking very good. I'm guessing the last bit is a transition for the following level?


Got two spanish contest levels for u guise