But yeah, I could add some more enemies there I guess, and probably look into fixing those other problems. I decided I'll upload it without waterfall/lavafall graphics cause no-one's taken those up for submission when I get home.

EDIT: Did I say when I get home? I meant this weekend. Lots of Japanese class homework... daibenkyousuru ;_;

Yeah. There. mwl files should be all I have for this. I didn't draw anything new specifically for this level.

Have a hole for the Spinies to fall here. This pit was full of Spinies (thrown by a Lakitu), and because of that, I couldn't pick-up the throw blocks up above.

Also, some people (ahem, Adam) has expressed that the clouds in the background look uhh with the dark outlines. I already have palette fixes to make it much more duller.

Posted on 2013-02-04 09:57:38 PMLink
For the ceiling we can just throw on that ceiling generator sprite right? Part of the magic of lakitu is being able to fly everywhere

As for the hammer bro... Not sure what to do about that. It's kinda a good introduction for him, and it stands as a simple challenge for the early game, so I'd rather not get rid of him.

I also notice lava splashes are messed up. Is there any way to fix, bar changing the tileset completely?

Posted on 2013-12-15 09:49:36 AMLink
Originally posted by aj6666
If you are going to introduce Lakitu, I'd advise you to use a fishing lakitu, so he won't be too annoying, but don't put him at the begining of the level because the players will start farming 1-ups if you do. Also, since you will be using a lot of pipes in this level, maybe you should introduce the pipe lakitus as well.

Why not simply edit the sprite so Lakitu carries a red Mushroom rather than a 1-up?

Also, I find forcing the player to deal with spinies in a confined space to be a rather interesting gimmick (such as requiring the player to be temporarily sealed in a one-screen wide area by a P-switch, while the Lakitu continues to toss Spinies). However, that's certainly too difficult for World 1.

Originally posted by herranakki
I,don,t have any idea why those boos looks like blocks.

Posted on 2014-06-15 08:11:08 AMLink
So I'm going through the level to fix it up, and I'm curious about some changes to it that seem to have been made in the baserom, that I don't really remember being there. I'd like to confirm when these changes were made before I begin editing the level. 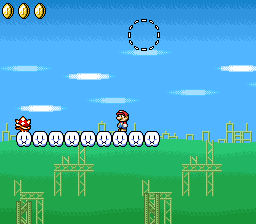 These clouds were put here, and the few red koopa troopas on the platform below were removed. In the original, you're supposed to reach this smwc coin by using the shells and stealing lakitu's cloud. I'd like to know why this change was made, rather than lowering the coin, which feels more intuitive to me. 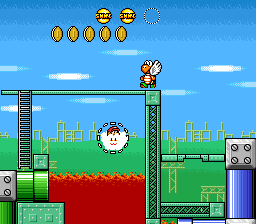 Originally, there was a brown platform here, along with a message block warning the player to "look, but not touch" the lava. The brown platform would've kept the player safe as they went for the smwc coin. Riding lakitu's cloud to get it feels way less safe for world 1.

EDIT: Nevermind, I found the baserom update where this was changed.. However, I'm going to remove the throw blocks and replace the koopas. The turn blocks messed up my momentum through the level. 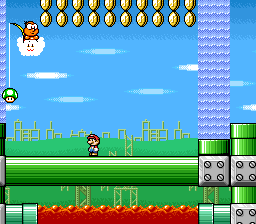 This one is more baffling than anything. In SNN's playthrough the hammer brother is still here, but he's already gone. I was going to fix up the area so it was a bit less cramped to deal with (Removing the waterfalls, making the player safer from lakitu.) Was there a change made between versions or something?

All changes were made by me shortly after SNN's post. The base ROM was either updated shortly after that same post or SNN used a slightly dated base.