Nicknames Your Friends Give You

From: Probably the planet you live on. Small world eh?

Posted on 2011-10-02 08:32:10 AMLink
well my friend started calling me Henrawr in grade 7 which is short for Henry R. My last name starts with R and there was another Henry who's last name started with W. It really stuck, as you can see.If you want to chat some interesting people, check out my new forum at: http://bloodybalcony.forumotion.ca/

Posted on 2011-10-02 05:08:07 PMLink
Well, going back into school, I was called Shadow, because I looked like this other guy, and they called him Sonic, but I wore dark clothes and had dark hair, and they called me Shadow. It was because myself and this other guy were equally the fastest in the school. It didn't stop until we left.

Posted on 2011-10-02 05:22:23 PMLink
In grade school I had the nickname of being called E-Man (my username, how convenient) which is a spin on my real name. Not really much of a story behind that, someone just started calling me that and it somehow stuck.

A couple weeks ago my roommate in University was trying to come up with nicknames for everyone on floor; well the people that are social anyways. Keeping in mind that this was close to midnight, he tried giving me the nickname "Rabbi" as an alternative to my last name. He also tried giving a friend of mine the nickname of Jesus as well. Needless to say, neither of them stuck for longer than that week.AnimeList | MangaList

Posted on 2011-10-03 02:18:38 AMLink
I have a few. (OHMANNOWAI)
Asian - Self-explanatory. The main one I'm called. And I'm one who doesn't get offended especially for little things like that. Then again I never get offended. Not really sure why most people don't say my real name but like I said I don't get offended meaning I don't care.
Miniman - One of my friends use to call me that cuz I was really short. Now I'm like the same size as him so he can't really say that. : P
Brandito - An nickname my old used to be best friend used to call me. Nickname for my real name. Bet you can't guess what my real name is. ooo:

I think there's others but these are the ones that easily come to my head. It's usually Asian my friends and acquaints call me. I honestly prefer it more than my real name. Not a big fan of it. :p

Posted on 2011-10-03 04:07:58 AMLink
I literally get called "Zero" a lot .. my grandfather invented that name around ten years ago and it just stuck. Eh. That's actually the origin of my username here - no, it wasn't the video game character. Seeing as I never really liked "stolen" usernames, so I'll put it, I'm hoping to soon get a name change.

That's it, really. My friends used to call me an "air head", but let's just say they quickly realized that it wasn't for the better of my pride control.

Posted on 2011-10-03 09:48:04 PMLink
Originally posted by Giga
Technically my name, Ted, is a nickname, being a shortened version of my legal name, Edward. But absolutely nobody calls me Edward, so it's really more of a regular name. =p

Same here. Will is short for William, but nobody (other then my oddball sister) calls me William anyways.Good fucking bye.

Posted on 2011-10-04 04:43:15 PMLink
My name is William, but people know me as the goodforyou guy because I say it wayyyyy too much. So they just yell that phrase out and I turn around.

They don't call me bill, will, willy, or billy. I hate those nicknames. But think of the plays of my name if my nickname was willy. "Willy Kwok"

People also call me the fatty.

Posted on 2011-10-04 05:39:07 PMLink
To say the least, I don't really have any nicknames any more, since I left school 3 years ago to go to Connections Academy. But previously people would call me a variety of names, and I can't remember all of them so I'll just list a few:

Lion - Because my name, Leeon, can be translated in spanish to "lion", providing you remove an e.
Leo - I'm serious there. Drove me absolutely nuts when they'd call me that.
Lea - ...See above. Except I got more annoyed because it's a girl's name and I'm male.
Crybaby - Yeah, I had a weak temper back then. If something didn't go my way or someone teased me too much, I'd starting crying like a five-year old who lost their blanket.

Yeah.
Want to see some of my cool swords? Well, too bad, right now you only get to see one of them, and it's my avatar. Might set up some kind of gallery/portfolio at some point, though.

I love when people call me Shroomie/Senjan though. Makes me happy when my friends knows of my hobbies and the stuff I make.

Posted on 2011-10-06 10:51:57 AMLink
Most people call me by my normal name.
However, some people on youtube (mah frands) call me Connie.Steam: controversialbread

Posted on 2011-10-06 11:40:22 AMLink
Most of my irl friends call me 'Mushroom', 'Monkey' and/or 'Alpha Male'. They call me 'mushroom' because my hairstyle looks like one lol. (I really do need to have a haircut this weekend.) Some of them also call me 'Monkey' due to myself looking like one. I really don't get the reason why they call me 'Alpha Male' (I know that it's a compliment), but I don't know.. I guess I will let them call me like that for now (?). Yeah, I think they might come up with a few other nicknames after I cut my hair. I realized that my nicknames depend on my hairstyle quite a while ago lol

Bobo: I act like a clown in public haha.

Corbin Dude: I don't know, a lot of people call me this because of part of my name, I think it would be easier to say my actual name, but eh whatever floats their boat haha.
Visit My 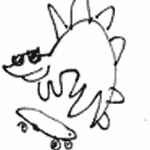 Posted on 2011-11-04 05:25:05 AMLink
Q - Because that's the first letter of my name. Creative, right?
Q-tip - See above.
Q-ball - Cue ball, Q-ball, yeah.
Pie - My username on everything, but shortened.
Lieutenant - See above.
Mt. Pie - Son came up with it. M and L aren't even next to each other on the keyboard but whatever.
Lou - Some nice person from some boards I will most likely never visit again. Most creative nickname I've ever had.
Dekiai-kun - Dekiai is Japanese for "doting", which describes me pretty well. Tessa calls me this. We have nicknames for each other in Japanese and it's really cute and stuff~
Jack in the Box - Because I wore a Jack in the Box shirt one time.
Complainer - Because someone mistook my depression for being whiny.
Eeyore - What the same people call me when they realized I just have problems. >>"

Ayup. That's about it.

Posted on 2011-11-04 11:20:50 PMLink
Don Gero (Yeah, its from Majora's Mask): I had a dream where the world had ended and I was one of the survivors and the other survivors called me "Don Gero" and I told this to a friend of mine and he started calling me that, it stuck.

Posted on 2011-11-05 12:36:40 AMLink
My friends, and everyone call me Nico, which is a shorter version of my real name, Nicolás.
Some people I don't know, call me by my complete name.
Some friends from school, call me Jim Carrey... They say I look like him, but I don't think that.
Unknown people sometimes call me Justin Bieber. And yeah, unfortunately I look like him, but I hate when they do that...
'Sup!
My YouTube Channel:
Th3Flam3BoY's YouTube Channel