Also I know I've been saying this about pretty much every graphics needed with no results whatsoever, but I may take a shot at drawing the duck.

Posted on 2013-03-04 07:12:41 PMLink
I don't see why spikes make any more sense than lava, but if other people agree, it's easy to change. The only problem is that spikes are not a one hit kill, so the user might be unhappy that he dies when he falls on them. Or he may not care, I don't know.

Posted on 2013-03-04 07:40:19 PMLink
Most people wouldn't find lava fitting in a bouncy castle like environment. Though I guess the reason to have that there is so the player knows he has to stay on the ferris wheel. But wouldn't they know that if the player goes close to the bottom while on the wheel and it doesn't scroll down?I no longer have interest in SMW Hacking as I did when I first started several years ago.

Why not make it be a bridge that destroys itself when Mario gets on the ferris wheel instead?

Posted on 2013-03-04 08:21:41 PMLink
Originally posted by MrDeePay
Why not make it be a bridge that destroys itself when Mario gets on the ferris wheel instead?
Then what's the wheel attached to? Also that would require more graphics.

The Ferris Wheel would be mounted on a concrete support in the water.

Also, we could use an HDMA Gradient to simulate an 'ocean'.Check out my music!

Posted on 2013-03-04 11:55:51 PMLink
I too don't think lava fits with this boss. Spikes don't quite do it either. I agree more with MrDeePay - solid land for the land that holds up the Ferris Wheel, breakable bridge on the rest.

Last seen: 22 minutes and 22 seconds ago

Posted on 2013-03-05 11:17:57 PMLink
Originally posted by MrDeePay
Why not make it be a bridge that destroys itself when Mario gets on the ferris wheel instead?
I can add to this. Maybe have the Ferris Wheel be in toxic water?!!! YOUR SAMPLES ARE COMING SOON !!!

Posted on 2013-03-12 09:25:47 PMLink
To be clear, I'm waiting for some kind of consensus on this before moving forward. A breakable bridge sounds fine, but I'm going to need bridge and breaking graphics.

Posted on 2013-03-28 04:24:31 PMLink
I changed the lava rising to a breaking bridge. Currently I'm using turn block graphics, but those should eventually be replaced.

Beyond that, all that's really left is animating the duck and reducing his health when hit. I have no imagination, so animating without graphics is very difficult for me. Unless someone has some decent attack ideas, that should be it.

1.he should summon fire works(7A) attacks the rise kinda slowly and explode.

4. destroying one of the Ferris wheel carts to limit motility.

6. make you play a rig carnival game and take all your coins such that it ruins your carnival experience and hurts your ego that you never want to go back to one ever again.

2. I don't think that would fit this boss, his brother seems more like the swooper, this is a dirty carnival director, I see him like p.t. flea in a bug's life. Doesn't want to get his hands dirty.

4. That was originally planned, but I thought it might make it too difficult. I'll put it in and see, though.

5. I think I'll have him throw pies like the amazing flying hammer bro throws hammers, maybe a few less.

6. I wanted to make it a carnival game where you shoot the duck, but they wouldn't approve the use of accessories.

With all that it should feel more like a complete boss, thanks.

Also I'll see if I can get someone to do the GFX. From what I understand, Ludus is no longer doing anything hacking-wise anymore.
Layout by LDA during C3. 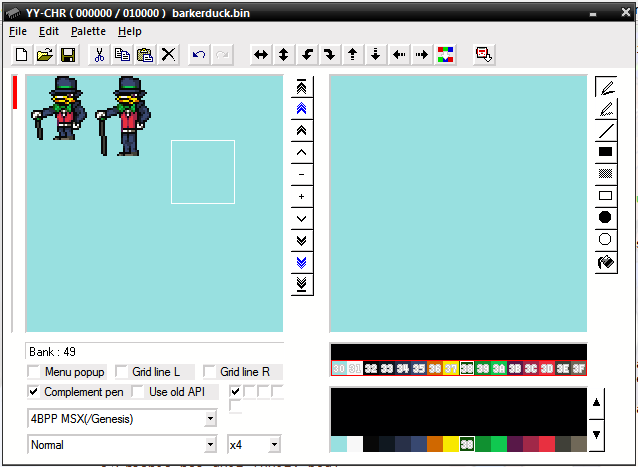