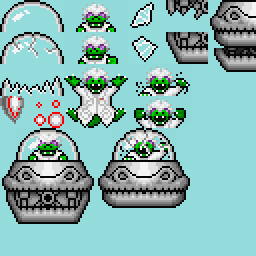 (YY-CHR Snapshot displaying palettes 9 and E. Upscaled for some reason.)

Um... I should probably make his grey-dient a bit darker, shouldn't I? And is there anything I should put down in that lower-right corner, or should I let you have fun with it?

(YY-CHR Snapshot displaying palettes 9 and E. Upscaled for some reason.)

Um... I should probably make his grey-dient a bit darker, shouldn't I? And is there anything I should put down in that lower-right corner, or should I let you have fun with it?

Actually, is there anything else I should add?

My only quip is that his hair is pure white, which makes it look weird; try graying it, as it looks like an anime hair rather than old-aged and/or stressed hair.

Postado em 2012-01-10 12:41:22 PMLink
Alright, his hair no longer uses the White part of the palette, and I edited the Grey gradient part of his palette to give him a green-grey sort of hair-do.

Is there anything else I can do here, or should I skidaddle?

Postado em 2012-01-10 12:51:14 PMLink
Only thing I can think of is a broken lower jaw part (to fall off when the final phase starts), so that it doesn't just disappear.My YouTube channel
Get the official ASMT resource pack here!

Alright. I was using palette row 9 for the capsule the whole time, but copied its colors to palette row F just now (in case you're fading it in/out like the Big Boo).

Unless you say otherwise, I will remove those two links once I see you've received them.

EDIT: Removed links to files. The files will remain in the file bin in case of some hilarious circumstances.
Última edição em 2012-01-11 12:36:58 AM por sunwarrior25

Also using a big boo-style fading is actually a really good idea; much better than just having the thing flicker out of and into view like I was planning. Graphical details like that will have to wait until I have the actual behaviour done and working, though.My YouTube channel
Get the official ASMT resource pack here!

Considering that Sunwarrior drew frames of the Doc's machine with visible damage, I say you shouldn't need to worry about that front.

Additionally, there was zero need for you to spam the exact same message into every boss topic with noticible progress. ONCE in the general topic (with the occasional reminder from time to time) should be more than enough.

As for progress, I have fixed the teleporting routine (having a finite table of X and Y positions saves me the trouble of messing around with the division registers), created the cluster sprite I need , and I'm currently coding the actual attacks (which shouldn't take too long, given that most of them can be described as "spawn sprite(s) - wait a bit - repeat until done"). Also, I blame the fact that the boss isn't done yet partially on college, partially on the level design contest, and partially on my tendency to procrastinate on everything and anything. D:My YouTube channel
Get the official ASMT resource pack here!

(YY-CHR Snapshot. Palette 9. EDIT: Part-way through writing this post I grabbed the correct palette file to work with. The one depicted in the image uses default SMW colors.)

Bombs I drew so far are:
• Generic round ball with a skull on it.
• That weird bomb with the fins.
• Not quite at 100% thought power, so I drew what I think a Morph Ball Bomb looks like.

Not sure which kind of shockwave to draw. Will it be two 16x32 sprites that accelerate in opposite directions? Or will it be more like the Sumo Bro's fire?

Postado em 2012-02-17 05:57:32 PMLink
That shockwave graphic is pretty much exactly how I imagined it should look like, and the first bomb graphic will work perfectly as well. Once again, thank you.

On another note completely, I've been thinking about changing the Doc's attack pattern; the way it is now (unlocking more attacks as the battle goes on, and randomly determining which one to use from the current move pool) means that there is a distinct chance of the player never actually getting to see all of the attacks, especially given the state of the SMW random number generator. Instead, this is what I've been considering:

- The Doc sticks to one specific attack for each of its first four hits
- Once he has been hit four times, he drops a mushroom and then starts alternating between the four attacks randomly
- One more hit, and he'll release a slow homing invincible enemy (the trapdoor idea from earlier would interfere with the shockwave attack); think Phanto, but much slower
- One or a couple more hits makes the capsule break, and the Doc starts up his final attack; the enemy from earlier might go away at this point, depending on how difficult it turns out
- One last hit, and he's defeated

I went ahead and drew a few things that could be a slow moving flying enemy:
• Some flying drone thing. I came up with it a long time ago and seriously doubt I'm going to get the chance to use it myself. Other than its propeller on the bottom, it looks relatively harmless.

• A flying cheeseburger. Why not. Maybe because it, once again, looks relatively harmless from above. Perhaps if I put the propeller on top?
• A phanto wearing some familiar glasses... This one actually looks like a generic phanto replacement, so never mind.

If none of these will do it, I'll try and draw something else, or modify one of these.

I have no negative opinions of your proposed change to Doc Croc's behavior. I think it's a good idea actually. Erm, out of curiosity, how large will the arena be?

Postado em 2012-02-17 11:03:06 PMLink
That little drone thing looks rather neat, but also (as you said) not like something that would hurt you if you jumped on it. Flipping it upside down to put the propeller on top or making it spiky instead of smooth might work, though.

And the boss arena is just going to be a single screen; anything bigger would wreak havoc with my cluster sprite projectiles.My YouTube channel
Get the official ASMT resource pack here!

In order to make it look more dangerous, I made the shell smaller, darker, and spikier. I also removed that odd red sensor/light?-thing that was hanging off the side.

Yeah, that makes sense- The only one screen thing that is. Uh... Do you want me to draw any "Doc Croc on the ground" frames? Or am I pretty much done here?


I must be getting too much into this. I just thought of an intro-type thing where Doc Croc is approached while out of his capsule, tricks Mario into turning around so he can run off-screen, only to slowly float down from above in his capsule. Also, the Wily Begging on The Ground thing. Am I wrong in thinking about this sort of thing too much?

...anyway, finally got back to working on this after a month full of various distractions. I just spent a couple of hours testing and debugging the code I created earlier (note to self: writing code and leaving the debugging for later is a terrible terrible terrible idea), and now I have the cluster sprite, the teleporting, the attack determining routine and the first attack all done and working. The attack is a simple spread of projectiles: 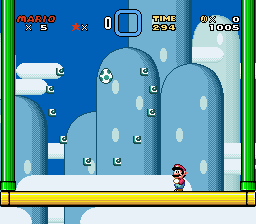 
Also I swear that I had an idea for something more threatening to replace the Grinder summoning attack with, but now I can't remember it for the life of me D:My YouTube channel
Get the official ASMT resource pack here!

(pretend this above the post that is above mine.)
Layout by LDA during C3.

Postado em 2012-03-17 09:12:30 PMLink
We should actually leave the yoshi egg graphics, then we can call this hack similar to ASMT and japanese hacks!Your layout has been removed. 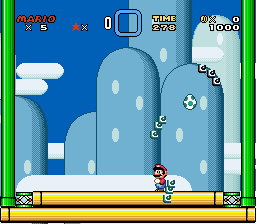 This attack consists of four spreads of three projectiles, fired diagonally upwards to alternating sides. A short while after being fired, each projectile switches direction and aims directly at Mario.My YouTube channel
Get the official ASMT resource pack here!

Postado em 2012-03-17 10:42:34 PMLink
Originally posted by yoshicookiezeus
Also I swear that I had an idea for something more threatening to replace the Grinder summoning attack with, but now I can't remember it for the life of me D:
Idea: spawning two 32x32 projectiles resembling grinders or something, attacking Mario by going in some sort of U swoop pattern, one from each side.

Also, good to see some progress. I like projectile dodging in 2D platformers, so this'll be a blast to play.