Briefing: This is the first level in world 6, and as such it should introduce sky enemies, cloud aspects, etc. You are welcome to get creative with it.
Last edited on 2022-05-03 02:34:08 AM by Falconpunch

Posted on 2011-11-07 11:08:13 PMLink
Idea:
We'll have Mario grounded for the first part where he'll encounter some flying enemies such as the flying koopa(supakoopa i think it's called) and maybe a lakitu . As he progresses he'll be going up higher to the troposphere until he's on top of the WORLD!!....which is were i'll introduce the main gimmick of the parabeetle.

Graphics: i'll take a look at the gfx section and if i don't find any i like i might just have to draw me up some(most likely)

Posted on 2011-11-08 01:26:38 AMLink
Awesome. The idea of starting at ground level, then going up into the clouds is actually how I envisioned the start of the sky world. I am curious to see how this one turns out.I no longer have interest in SMW Hacking as I did when I first started several years ago. 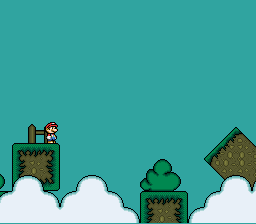 Clouds are layer one while the grassland is layer 2. I've already got the level design in mind for part one. I plan on using para-bomb and para goomba.

Last seen: 3 months and 7 days ago

Posted on 2011-11-19 05:39:06 PMLink
Do you have any updates on this? I noticed you had an IPS posted that you were going to fix up. If you have a new one to show soon, I'll give that one a playthrough and offer some feedback of my own. Originally posted by Woody
I have a name idea for this level. I think it will be Sky High Rise.
All other levels have names that are alliterations or rhymes. This one being an exception would surprise most players, and I don't think SNN would like that.<blm> zsnes users are the flatearthers of emulation

Posted on 2011-11-21 08:08:40 AMLink
"Sky High" kinda rhymes, but the Rise doesn't fit.
Maybe you could have an alliteration with H after "High" so you would have both a rhyme and an alliteration in one name.Your layout has been removed.

As for the name i was thinking Tropopause Trail, but i'm no word smith.
Sky High reminds me of that Disney movie which is no good.

As for the level, i wanted to fix some spots and make it a tab bit easier, only is the second and third areas.
Also i'ma whip up a bg for the third area.

Last seen: 3 months and 7 days ago

First area:
I actually found this the most boring part of the level. Compared to the other two parts, it seemed really generic overall. There were a lot of random enemies that felt sort of slapped together, which as a whole led to a rather "eh" area.

Second area:
This part, on the other hand, was great, although maybe a bit too easy. Consider altering a few of the setups to allow for some more devious dodging. For instance, there is a classic Hammer Bros. partway up that is ultimately no threat since you can just swerve around him. Relocate him and some other sprites so that they actually get in the way of the cloud. Those circling blue Koopas seem to work nicely here, as do the pipe Lakitus, so try using more of them instead of easily avoidable stuff like Bullet Bills.

Oh, and there is a pipe dwelling Lakitu right next to the midway that throws his Spiny into the roof. It looks really weird, and can be fixed by simply raising that roof by a tile.

Third area:
I liked this area a lot and I think it may be fine as-is. Just a quick note though that the bottoms of the cloud platforms do not have layer priority enabled. It looks a little weird since the top + middle do.


My suggestion? Scrap the first area entirely and actually start the level on the Lakitu cloud. Try extending that area + the last area by a few screens each, adding in a few more interesting ways to dodge enemies. At that point, you can shift the midway to the end of the vertical room/start of the last room. I think it would greatly help your level, at least.

Posted on 2011-12-02 01:22:24 AMLink
Well i originally planned to make part one short but i got carried away. I'll start in the vertical area like you said.
Also i made a background. 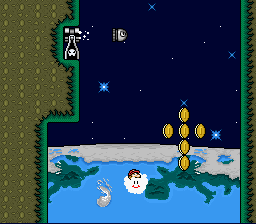 But i'm afraid of heights! 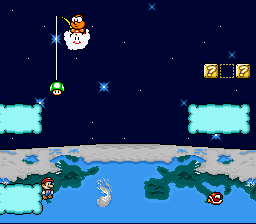 Edit: also i chosen to go with Tropopause trail.

I kinda need to finish something... Meh.

Posted on 2011-12-02 06:00:58 PMLink
I have to agree it seems strange to have a recognizable Europe there. Mario's world is clearly not ours, so it only seems logical that the continents should likewise have a different arrangement. And really, isn't they idea of strange new landmasses instead of that same old setup we've seen countless times on maps and globes more compelling, anyway?

Honestly, that BG doesn't really fit. The level is supposed to take place in the sky, not in space. Furthermore, the BG alone makes the level look like it should belong in World 9, not at the beginning of 6.

Originally posted by Roberto zampari
Reminds me the level from SMWYeah!!

Would it hurt to give some actual feedback around here other than constantly saying "Wow this reminds me of X" and nothing more?