I already started on the graphics:

Going for a desert theme obviously. Level comes with quick sand (acts like water) that uses a palette animation to create the proper look. The current look of the level is inspired by Super Mario Bros 2 and Super Mario Bros 3 desert levels.

Sure you can claim it, nobody has taken it yet.

Now looking at the claim list I realize it's getting a little messy and hard to read. I might need to clean that up a bit.

I'm planning on doing a small choose-your-own adventure sort of thing with lots of custom bosses and such. I might need a couple sublevels though.

I already started on the graphics:

Going for a desert theme obviously. Level comes with quick sand (acts like water) that uses a palette animation to create the proper look. The current look of the level is inspired by Super Mario Bros 2 and Super Mario Bros 3 desert levels.

Woa, That looks very good. It's so good what you guys can do with the original recources. As the original SMW didn't have any desert level, you just made a great one for them ;D.

@Silverswallow: Hey, I have a problem with the recouces I used, when I insert your EXGFX file, It messes up the game. Could you test if the ExGFX file is all-right?

Classic Level 12 is yours have fun with it.

That’s too bad, I’ll take your level off the claim list.

Added you on the claim list.
Just be careful with that level idea and make sure it doesn’t get too big.

I’m not sure why that’s happening, I just tested it again and it works fine on my end.

Make sure you’ve inserted the ExGFX file and Map 16 tiles before trying to load the level file.

If you still have problems I’ll send you an ips file (with tile set already inserted) that you can work with.

I was so stupid, I just realized I inserted the ExGFX in the FG2 page instead of BG2 ;D.
Ok, Let's get started then!!

EDIT 1: I've made some screens already. I really like working with this, thanks Silverswallow! Progress will be uploaded this evening maybe.


Originally posted by Oh Hell No
Here are the first 5 screens, comments?

One thing that caught my attention is the portable spring board. A player could drop it in the swamp and end up stuck, or have to scroll back to force a respawn.

A setup you could try instead: 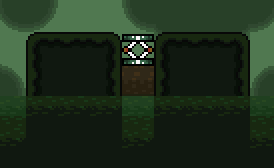 Put the spring between two solid blocks so the player can’t end up picking it up and possibly chunking it into the swamp.

But this is just a suggestion, keep up the good work!

Postado em 2012-08-16 10:23:11 AMLink
Aaaargh, I don't now how. But I suddenly lost all of my progress. For some weird reason, when I load my level, your sample level appears.
Don't worry, I stil have my first 5 screens that I easily can reconstruct from my link. I didn't add any screens since, just the roof bushes you sent me.

As for the custom music, I think Forest Interlude from DKC2 will fit great here, what do you think?

EDIT 2: And, with that, I could make some more of the level.

This is the screen with the Springboard until B.

The midway point looked weird with the palet, so I made a quick cover.
I may draw the midway point again with the right palet in the ExGFX file SilverSwallow sent me, but I could also keep this or make another cover.
Última edição em 2012-08-16 02:29:54 PM por Fornaxus

Forest Interlude should fit quite well with this kind of level.

My bad on the midway point palette, I always forget to work it into the palette as I’m changing it. It looks like you’ve found a good work around though, feel free to keep it like that if you prefer.

Edit: Oh wow I just noticed the way your using the "tree-bushes" (top of the screen) look a lot better than how I had them set up, excellent job on that.

I was really in the mood for this level so I made some more screens.
Tree bushes haven't been added yet, but I'll do it tomorrow because my inspiration is gone now.

Oh, can I get the code for the userbar of TCCR designer? I'd love to have it ;D.
NVM, I found it on an earlier page on this topic

But! Here's the last screenshot.

Ignore the level entrane on screen 12, just did that for testing. (I needed to scroll the screen via a vine, because Vertical scroll at will really s*cks in this level)

EDIT 3:
Replaced some sprites, objects and tested if everything was allright. And it is.
Here's the IPS!

Oh, Silverswallow, you may want to update the main post screenshots. They are a bit outdated and it may attract more players if you show many more finshed levels.
Última edição em 2012-08-17 10:55:00 AM por Fornaxus


Wow you’ve been working real fast! I really appreciate your dedication to making this level. I won’t have time to test the level till tomorrow, but from what I’ve seen from the screen shots it looks pretty well designed and thought out. I should have a review by tomorrow night.


Originally posted by Oh Hell No
Oh, Silverswallow, you may want to update the main post screenshots. They are a bit outdated and it may attract more players if you show many more finshed levels.


Heh, you know I’ve been thinking the same thing. I’ll get around to that pretty soon.

Postado em 2012-08-17 07:05:59 PMLink
Thanks, it was a pleasure to work wuth your tileset. I think I'm better at creating levels and level designing instead of making the tile sets for it.

I have one more question: As I'm very,very bad with names, and with that I mean really bad, could you think of a better name for my previous level (Which is still Cheese Bridge Area) and for this level. I don't know, but with my level names, you won't come any further then Green Swamp or something ;D.

Postado em 2012-08-18 05:10:54 PMLink
First of all I thought it was a real good level and once again you did a really good job with the difficulty (easy enough to be a World 1 level but not too easy to be boring). The majority of the problems I found were graphical issues. 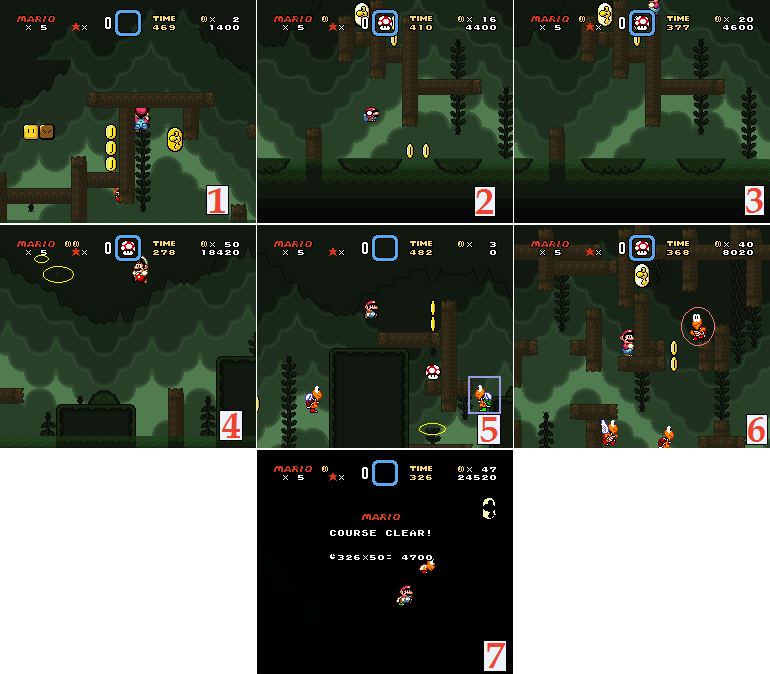 1. I can view some pretty big cutoff if I scroll the screen up using this vine.

2. The tops of these lily pads look cut off with the green horizontal line; I’d just switch them back to a black line or to a much darker green line so it shows up more.

3.If I jump up here without using the vine it’s hard to see what’s going on. Quite a few times in this level you can get a little too close to the top of the screen without the ability to scroll it upwards.

It probably would be best to set free scroll at will, but you did say you were having trouble with that. What was the problem with it exactly?

4.The BG shows through here I noticed this a few other times as well.

5. This green koopa isn’t placed very well, he always falls right into the swamp before I can even get near him. Also you forgot to give this small vine a top.

7. I like the idea of having enemies surround the goal but it creates an odd situation if you fail to clear them out since they'll continue to move next to you as you do a victory walk.

Also the Yoshi coin appears partially blacked out during this sequence.

Still despite these few flaws the level was still well done, you did a real good job.