Posted on 2012-08-19 11:31:36 AMLink
Originally posted by SilverSwallow
First of all I thought it was a real good level and once again you did a really good job with the difficulty (easy enough to be a World 1 level but not too easy to be boring). The majority of the problems I found were graphical issues.

Thanks, glad to hear you liked it. I think I worked little bit too fast, so not all the graphical errors catched my eye

Originally posted by SilverSwallow
Screenshot 1,2,4,5,6
All fixed, thanks for pointing that out.


Originally posted by SilverSwallow
3.If I jump up here without using the vine it’s hard to see what’s going on. Quite a few times in this level you can get a little too close to the top of the screen without the ability to scroll it upwards.

Ok, that's something major. I looked at the level again and forced the player more often to use a vine. As far as I've seen, you almost cannot get out of the top of the screen except you do some really weird maneuvres.


Originally posted by SilverSwallow
It probably would be best to set free scroll at will, but you did say you were having trouble with that. What was the problem with it exactly?

Yup, that could be a solution. Vertical scroll at will doesn't give any problems itself, but only making it scroll when you use a vine gives it more potential I think. But that's me, it's always possible to change it to that.

Originally posted by SilverSwallow
7. I like the idea of having enemies surround the goal but it creates an odd situation if you fail to clear them out since they'll continue to move next to you as you do a victory walk.

Also the Yoshi coin appears partially blacked out during this sequence.

Oops, totally forgot about that, The end looks like this now:


Originally posted by SilverSwallow
As for the name I'll come up with something eventually. I can't come up with any good ones right now.

That doesn't matter, we have enough time, don't we ;D


Originally posted by Egadd
I also have a question. Is the Big Boo Boss secret exit already in use, because I would like to have it for my level. Thx a bunch.

Nope, nobody has used the Big Boo Boss in this hack yet.


Originally posted by Oh Hell No
Yup, that could be a solution. Vertical scroll at will doesn't give any problems itself, but only making it scroll when you use a vine gives it more potential I think. But that's me, it's always possible to change it to that.


Ah I see and I guess with that one part I mentioned fixed it shouldn’t be a big deal to have it only scroll with vines. Glad to hear you were able to fix everything with no problems.

The end of the level looks better now and I like how you set up the tree-bushes around the Yoshi coin.

You can go ahead and send in the final version of the level when you’re ready.

Alright I have an update on my World 1 Creative level: 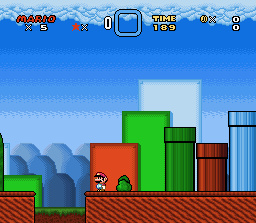 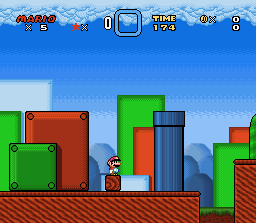 Going for a SMB3 style level.

i just hope this works.

Posted on 2012-08-24 07:43:03 PMLink
I’m sorry qazcake but your level needs a lot of work, it isn’t at all what we expect in a Reassembled level either. However I’m willing to work with you to make a much better version that’ll be satisfactory. First read the review below: 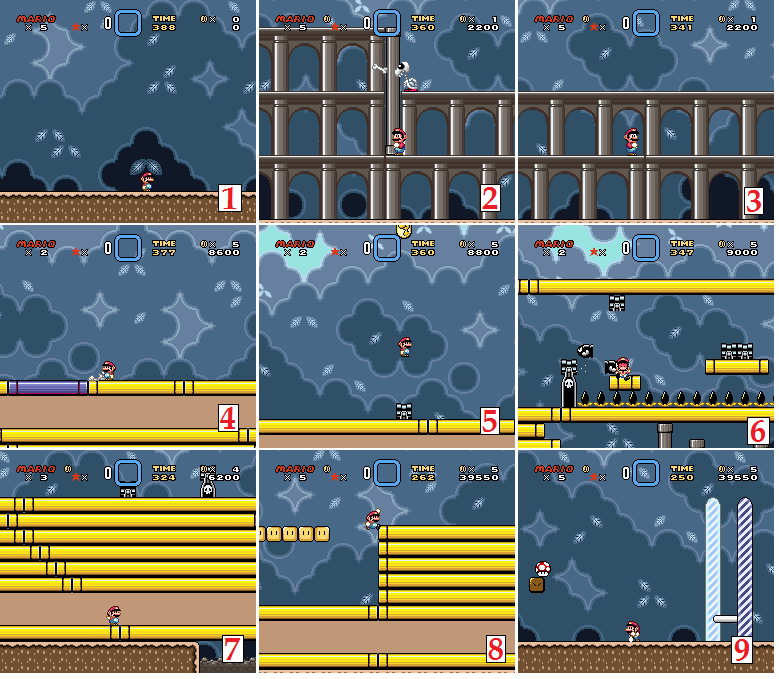 1. Starting off it’s a little bland and flat. Also you really should go with a custom palette since this is a Reassembled level after all.

2. Odd that I can pass thru these pipes as if they were bushes. A good rule to follow is to get rid of and objects black line when you want to make them passable. Like this:

However I’d advice against making pipes passable since players have come to expect pipes to always be touchable.

3. A full screen with nothing going on, I see this way too often in this level. Also despite having multiple levels here they’re still all flat you really need to vary up the landscape in this level.

4. Not sure why you changed a few pipes to use palette 7 and why you put dry bones underneath the pipes. The pipe ends up with a bad palette because of the pink color in palette 7 and the dry bones has no chance of causing damage when he’s trapped below these pipes.

6. Finally at this screen the level begins to get engaging and starts to hold my interest. However it’s a little tight especially if you’re playing as big Mario. The cannon on the ceiling is cut off at the bottom. You can easily fix this by flipping it vertically. Also I don’t really like seeing munchers here I think spikes (from the ghost house) would be much more fitting with a ship theme.

7. Seriously this little tunnel goes on for 4 screens (with no variation what so ever) before you finally reach the Yoshi coin, that’s not good design. Also the gray lava is random and unfitting.

9. It’s odd and unnecessary to put a power up so close to the goal post.

I rarely suggest this, but in your case I think you should just scrap your current level and start from scratch. You have a good idea (ship theme) you just need to implement it better. I’ve created a tile set you are free to use. It looks like this:

If you want to use it download this ips patch and you’ll find the tile set (and a level example) in level 103.

If you still want to keep the original level you’ll need to do a major overhaul on it. You should use a custom palette, make the ship look more like a real ship, add more variety to the landscape (slopes, stairs etc), add more enemies and I’d suggest make it more linear (i.e. ditch the tunnels to the Yoshi coins)

Thanks, your level will appear in the next base rom update.

Posted on 2012-08-25 04:27:03 PMLink
well i cant answer all of the claims here you put. a redesine with that custom palett would be good. also can i add music from another mario game or would anything do. ill remake it as an airship but i dont know since cutsom sprites are banned for reassembled ill work with what i got and the gfx to redsinge it as an airship level.

Posted on 2012-08-27 08:10:49 PMLink
Sorry guys. After trying several different things with my level, I now realize it is too ambitious for a project such as this (not to mention I have absolutely no experience inserting sprites). I'm also suffering from a case of writer's block, though working on this has helped a bit. I'm really sorry.

Posted on 2012-08-28 06:52:37 PMLink
Absolutely fantastic job on your level “Range of Roasting" Suhru! The sprite placement was some of the best I’ve ever seen. Although the level is a little long it manages to remain engaging till the goal post. The palette is great as well, changed just enough to give it a unique look while still maintaining a classic Super Mario World level feel. It also was really challenging in a real good way, and is the perfect difficulty for World 6.

I’ll go ahead and point out 4 small things I noticed: 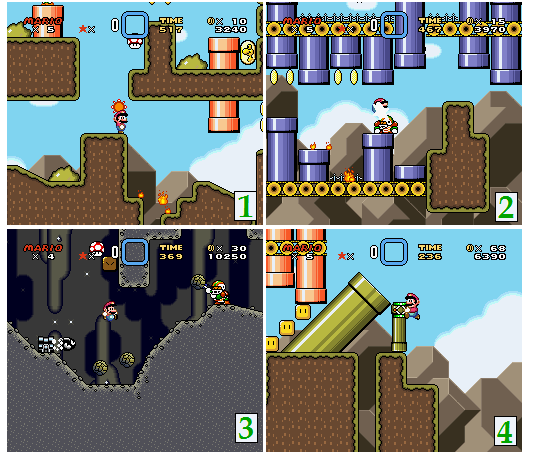 1. Kind of unlikely for the player to see this spiny coming when they will probably be fixed on watching the flames movement.

2. A little tight here with the chuck in the way, especially when you’re big Mario. The persistent flame doesn’t make matters any easier.

3. Seems a bit unnecessary to make this power up so hard to get. It’s so dangerous the player is probably better off just ignoring it.

4. When going back to get the secret exit with the spring you’ll have to climb back up this pipe and big Mario can just barely make it.

Once again it was an amazing level, if the original Super Mario World had a world after the Special World this would be the perfect first level for it.

If you want to make any final adjustments go ahead, otherwise I’ll be glad to insert it into our next base rom update.

Alright I’ll go ahead and free up your level, as always feel free to reclaim it if you get time.

How about making a level that is similar to the gun ship level in World 8 in Super Mario Bros 3?

It's close to the idea you had only the ship isn’t wrecked yet.

I’m referring to the level seen in this video at 1:58. You could use bullet bills, monty moles, and bob-ombs for enemies and make it auto-scroll.

Ah well your level did sound like it could get complicated. How about just toning down the amount of ideas and simplifying it up some? When an idea or level gets too big it’s always a good idea to downsize a bit. Or you could always scrap your current idea and try something entirely different.

If you need more later you can just let me know.

Posted on 2012-08-30 07:30:16 PMLink
I ended up losing motivation on my oriental themed level. So I decided to completely change the idea of my level to a volcano interior theme. I plan to make it like a sequel to my “Sensitive Volcano” level I made way back in 2009.

Sensitive Volcano was vanilla, but “Emotional Volcano” (name pending) will use custom graphics.

The look I’m going with so far:

(Note: thwomp FG block drawn by SilverSwallow rest by me)

Yep those are gravel pipes and plenty will exist in the level. Will some leak deadly lava? Probably.

As for the oriental gfx I made for the old level I’ll leave them in the rom in case I (or someone else) still decide to use them.

Added a BG and made FG a little more interesting. 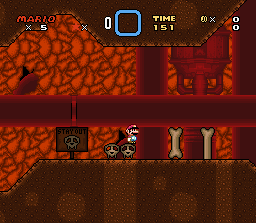 Added some objects for decoration too.

Excellent tile set you got there Aquamentus. The mix of regular and gravel pipes is truly unique. However I think you should remove that black line on the pipe connector in the BG as it stands out more than it should.

Here are a few screens to show how it’s looking so far:

No enemies have been added yet of course.

Here are some new Super Mario Brothers 3 style enemies/objects I came up with for my SMB3 themed level. I basically just changed the palette and shading of the original sprites since I didn’t want them to look too different from the original.