Of the 4 I prefer the first one: 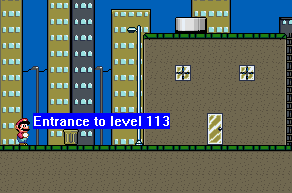 The colors in this palette go together better than any of the others in my opinion.

Here is a palette I came up with that you can consider as well: 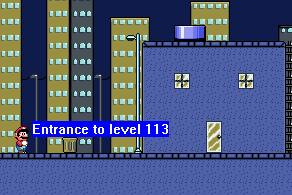 Perhaps if you want a night time look.

I've trimmed down my idea even further, now it is sort of a homage to River City Ransom, the houses have powerups and coins. It will be a cinch to think up ideas now that it's not super complex.

As you know I work on a level here with fast food graphics. The enemies in this levels are vegetables, so I thought changing atleast the custom sprites i use would be appropriate. The custom sprites are use are the classic mario bros. enemies, fighter fly and monsieur crab.

Would someone willing to make graphics for them? If you need the YY-CHR File, than don't hestitate and tell me.

Posted on 2012-09-18 05:45:32 PMLink
Originally posted by Shog
Would someone willing to make graphics for them? If you need the YY-CHR File, than don't hestitate and tell me.

Though a tomato isn't actually a vegetable it's still in the "healthy food" category.

How's it look? Too weird?

That Looks Pretty Great, and the way of your hack too. ;)

To add to the healthy food enemy roster: 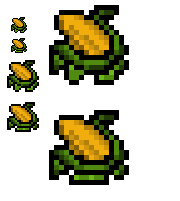 This started out to replace the fighter fly but I’m not sure how well it’ll work with it.

Kind of depends on how the fly animates it might end up looking like the corn is trying to hover like a Yoshi or it might just look awkward. This could also replace a goomba or something else of course.

How does it look to you guys?

Posted on 2012-09-20 04:10:50 PMLink
That corn enemy looks real nice and colorful. I do think it would fit better replacing a goomba or shelless koopa rather than a fighter fly however.

I finally finished my desert level. It was tough coming up with a name, for now I’m calling it “Scorched Desert” (even though it takes place inside a pyramid too). 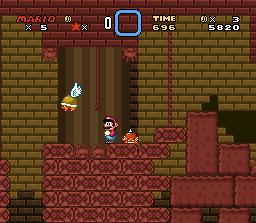 If you want to try it out click here .

So we’re all drawing vegetables now? Not wanting to miss out I came up with this:

Could replace the fighter fly’s graphics.

I think the Tomato works best for the crabs, as they only x flip and there second state is "angry" (which fits)

Both are red, too.

The fighter fly would be better replaced by the pumpkin, as the leaves looks like they could be "rotating", so they fly.

Too bad that for the sweet corn, that it doesn't seem to work in my opinion as sprite grapchis, as I like it's design the most from the vegetables

Maybe it should be added to act as the carrot as some kind of other "touch it, get damaged" block and to add some variety

one a side note:

I hate it that the carrot kills Mario directly

I'm going to replace it with "hurt" blocks. 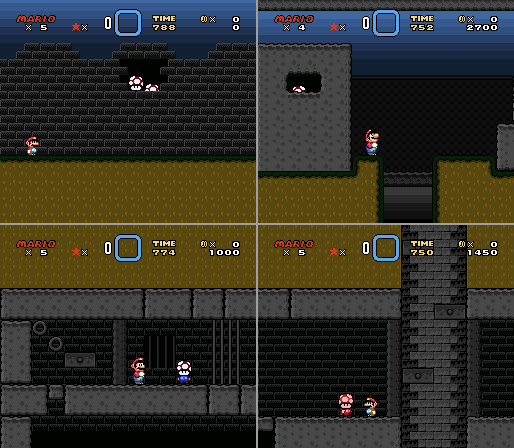 You’ll see a few vanilla Toads while you navigate through jail trying to find a way out. It won’t be easy to avoid all the “evil” Toad guards and traps.

Thanks, and yeah I know he looks a bit odd but he still does a good job resembling a Toad.

I added some decoration and sprites to my SMW Jail level.

The final pic shows Mario discovering an underground tunnel dug by a prisoner. Can he use it to escape?

I’ve already been working on the level for some time:

Just a few pics showing the first section of the castle which mainly consists of layer 3 smash and grinders. 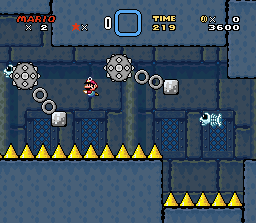 It’s meant to be like a tougher version of the Vanilla Fortress from the original SMW.

Here I present you what I did so far. I just want critics if the level is structured well and some other things (pallete, midway position etc.)
Some stuff i implended is left out intentionally, due to testing if the general level structure works for you. NOTE that it is one of the last levels, so it has to be challenging

WHAT NOT TO SAY:

-bounce blocks being stupid with scroll
-do NOT enter the doors, both of them should contain some boni in the future
-i didn't implent the food enemy graphics yet


After completing my SMW jail level I got inspired to create some new graphics after looking at some screenshots of the game Yoshi’s Story.
The screenshots reminded me of how much I like the jungle levels so I started a tile set based on 4-4.

Here’s what I got so far: 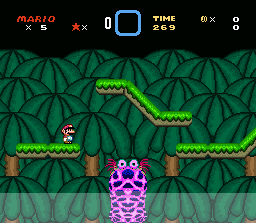 And nice style and very very good graphics, it looks really good: I wonder however, if we can make these guys moving like in the orginal game (not exact movement, but simple up down movement would be already nice)

Brace yourself for a big review full of suggestions:

The level isn’t too bad Shog but I feel it has an odd balance of difficulty. Some parts are too easy or simple, and then there are really hard parts that come off a little cheap. I’ve come up with a review of your alpha level and have divided it into 4 main sections.

I noticed at 2 points in the levels you can walk thru the slope. In the first screen you just put the wrong M16 block under the slope (acts as 130 instead of 1E2) and is an easy fix.

The second screen shows something that doesn’t happen unless you jump in an odd way. Still I thought I’d point out this can happen since M16 block 1E2 isn’t fully covered like in the other situations and can lead to Mario getting inside the slopes.

For screen one I don’t really like the layout. You either have to spin jump off an enemy and land precisely next to a death carrot or jump though the tight space between the burger and dangling carrot. I suggest altering the layout of this part a bit to give more space between objects. (Maybe stick a flying piranha plant on that table instead of a vegetable)

As for screen 2 I’m pointing out that the fries become solid when you hit the p-switch with no visual indication. You can stop the fries from becoming solid by changing them to act like a purple coin (2C) which forces them to always act like a coin.

As an additional idea you could have 2 types of fries (which look different) one that always acts like a coin and one that can become hard after you hit the switch and you could refer to the one that gets hard as getting stale. Stale fries could lead to a secret area!

In screen 1 I accidentally killed both of the enemies and can no longer make the jump. It’s okay to require the player to use an enemy to reach a high up ledge but you should avoid a situation like this where they player is totally stuck. (examples: make jumps like these optional for 1ups/coins or have it over a death pit)

For screen 2 I’m just pointing out the blocks are a little high and I can only reach them when I run and jump at full speed. Also I wonder why they aren’t burgers?

Screen 3 shows a carrot pit that I couldn’t get across. Seems impossible to me since the ceiling gets in the way.

This section is a little too flat and easy to pass. I suggest (see green shaded pic 1) you add the fish generator here as it would work real well. Also it would probably be best to add more variation to the FG by placing some blocks on the table (see final pic).

Overall I believe you are on the right track you just need to work a little harder on your sprite and tile placement to ensure a good challenge without it being too cheap. Try to avoid placing too many carrots in a row since it looks unattractive when so many are place right next to each other.

Also here’s a little set up I just thought up that I think could work well in your level: 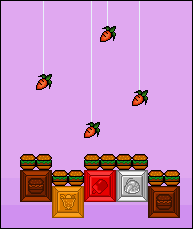 Posted on 2012-10-22 08:03:41 PMLink
Sorry, but I'm quitting my level. I have lost interest in SMW completely now.
Slowly regaining interest in hacking