Posted on 2013-05-04 04:51:53 PMLink
And sorry if I am asking something obvious, but am I really only allowed to use original GFX or does the main GFX-"feeling" have to stay the same and I can add little extras like exanimated Snow?


Originally posted by ErikAlay
EDIT: I was gonna claim a sublevel. Can I take 14C? And which secondary entrance can I take? 111?

You can take secondary entrance #111. For a sublevel go ahead and take level 14D instead.

And sorry if I am asking something obvious, but am I really only allowed to use original GFX or does the main GFX-"feeling" have to stay the same and I can add little extras like exanimated Snow?

Yes only graphics from the original game are allowed in reassembled levels. We do allow you to create animations from original graphics by shifting, rotating or flipping the graphics in yy-chr however.

So if you can find something that looks like snow in the Allgfx bin file you can use that method to give the tile an animation that could create a snowy look.

Level 103 (Version 2)
Alright I tested it and I believe it’s ready to be inserted. One thing though you forgot to put a message block warning about the orange death water. I can put the message block in for you just let me know what you want it to say. Also are you going to use the name “The Shell Navy” or something else?

Originally posted by ErikAlay
ok then

It’s a really nice level I like how the secret exit was done. I found just a few issues with the level: 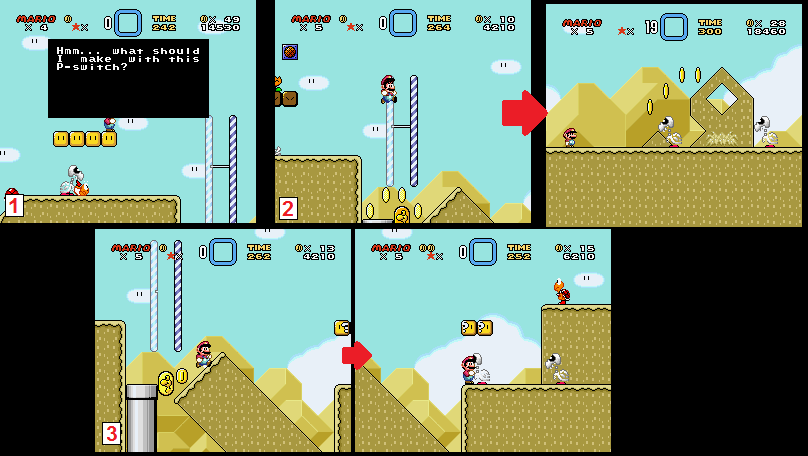 1. I feel this message block is entirely unnecessary as it doesn’t really provide a tip for the player. I’d just remove it altogether since I don’t think most players will have much trouble figuring out what to do with the p-switch anyway.

2. You forgot to set the midway entrance. So if I die after touching the midway bar I still go back to the very start of the level.

3. Kind of a blind jump here, you can’t really tell what’s on the other side till you jump and then you don’t have enough time to react to the dry bones that ends up hogging the ledge.

These are the only problems I've noticed the rest was all good, nice job.

Alright, I removed the message block, fixed AFAIK the blind jump and set the midway coordinates. If you don't see any issue I'll send you the level.

EDIT: Fail, I did not put the link: clicky

Thanks, I see no other problems so I’ve now inserted the level.

Oh I almost forgot do you have a name for the level? It still said unnamed on the new ips.

Ah that’s looking pretty incredible and the aesthetics are a nice fit for the world 2 theme. I do notice microscopic cutoff (where castle block corners meet the bush tiles) but it’s no big deal since it’s really hard to notice.

Aside from that, can I claim level 10D? I have nothing to do in this days so...


Originally posted by ErikAlay
Ok, right now I don't have a name, but I'll think.
Aside from that, can I claim level 10D? I have nothing to do in this days so...


Originally posted by Pokeymeister80
Now, I'm in dire need of mixed graphic for sprite. Can I claims ExGFX135?

I hope a Level with that Style is ok - The Graphics are going to be fixed! (Especially looking at the Castle-Tileset) Also I am not really sure if the "Pokey-thwimp" can be kept, although it is slightly against the Reassembly-Rules.

I like what I’m seeing in the first screenshot, but in the second screenshot I’m getting the sense that you’re trying to use too many foreground types in a single level. I think it’d be best to just stick with the grass and cave foregrounds unless you plan to use the castle tiles in a more creative way later. Those tiles and the lava just seem out of place as they are shown now.

The foreground palettes are looking great but I think you should try a lighter blue for the sky color. For the “thwimp pokey” you could just have the body parts made of thwimps too instead of edited faceless thwimps (this way it wouldn’t break RASM rules).

The spike in the first screenshot seems awkwardly placed I suggest placing them in the ground so you can only touch their top (like how munchers are usually placed).

Also you might want to darken the dry bones palette so he doesn’t blend in with the background as much.

All my suggestions are summed up in this image: 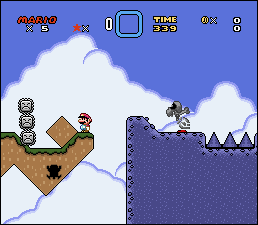 
Yes you can take both of those.