Posted on 2013-05-21 03:56:44 PMLink
Nice job on the level Erik Alay. The pallete tweaks were nice and difficulty is well suited for level 3. There were just a few issues with sprite and yoshi coin placement that I’ll go into detail about below:

1. This blue koopa is too close to Mario’s start location and it doesn’t help that he approaches so fast. I’d push him back a bit so the player doesn’t have to react so fast at the very beginning of the level.

2. These 3 dragon coins are way too easy to get. I suggest putting them higher in the air or hiding them a bit better.

3. These red paratroopas don’t fly low enough (their position in the screenshot is as low as they go) which makes this jump a lot harder than it needs to be. Simply lowering them a bit would make this part much better.

EDIT: Will hack is released for C3??
Amazing layout by JackTheSpades I'd do classic but it's hard to make nintendo quality levels, and creative is chocolate, which I am inexperienced with.

EDIT: we should also have the last level have one dragon coin per sublevel, OK?

On a side note: It seems you're not able to write English very well.

Said the guy whose English isn't fluent either (will be released comes to mind), but nor is mine. We non-native speakers try to make the best out of it and learn from other members.
Anyway, your level does look pretty promising. The BG could be a bit less empty though. Also, The Shell Navy is a name I really like for my level, Silverswallow, sorry for the late reply.
Last edited on 2013-05-22 08:24:42 PM by Fornaxus


And sublevel A2 and secondary exit 34


Originally posted by natnew
31: [Reassembled Room]
I'd do classic but it's hard to make nintendo quality levels, and creative is chocolate, which I am inexperienced with.


Originally posted by natnew
EDIT: we should also have the last level have one dragon coin per sublevel, OK?

The way this level is going to work is that at the start you choose one of four doors at the start (like Bowser’s Castle in the original SMW). There will be a door that leads to a classic section, a reassembled section, a creative section, and a cookies and cream section. Then all paths will connect to the Mixed room and that room will lead to the finale.

I’m thinking the mixed section should have 2 yoshi coins so the other rooms should have 3 so it’ll add up to 5 (since you’ll only be playing one of the first 4 rooms each play through of the level).


Originally posted by Oh Hell No
The Shell Navy is a name I really like for my level, Silverswallow, sorry for the late reply.

Ok cool, but what did you want the message block to say about the deadly orange water?


Originally posted by Pokeymeister80
So yeah, I am going to claims map16 42 and sublevel 90 and 91. Please?

Yes you can claim those resources.


Originally posted by ErikAlay
1. 110: [Classic Level 5]
And sublevel A2 and secondary exit 34

I'd do classic but it's hard to make nintendo quality levels, and creative is chocolate, which I am inexperienced with.

EDIT: we should also have the last level have one dragon coin per sublevel, OK?

also, I was thinking a segment that is covered in moss (palette 6) and is a vertical "climbing the tower" level.

Posted on 2013-05-29 10:01:37 PMLink
Seriously, a hack looks dream and veteran, glad the final release end of the year!
Amazing layout by JackTheSpades

Alright a lot of problems with this level. First off it’s not at all what we expect from a Reassembled section. Review my intro post it’s really supposed to be about using vanilla resources to create a totally new look. 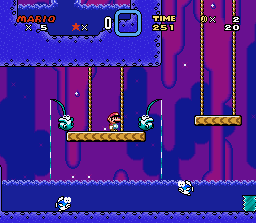 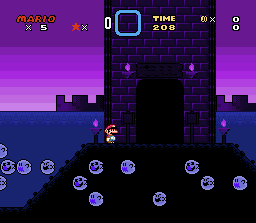 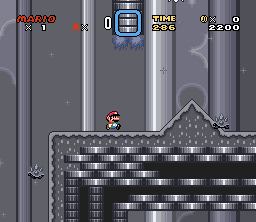 Judging from what I’ve seen in your final level section I think you’d be better off trying to do the “classic” theme instead. 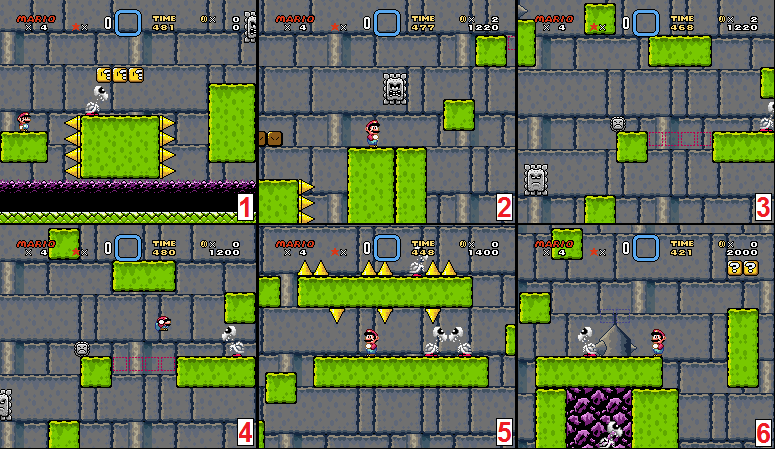 1. First off the green FG and gray BG don’t look good together and the purple lava isn’t attractive either. The adjustments you made to the BG just make it way too repetitive. You should bring back the castle windows to help spice up the BG.

2. I’ve always thought that a Thwomp suspended in the air with nothing surrounding him looks rather odd. I’d adjust the level design so he can be surrounded by walls and a ceiling.

3. You can’t see Mario in this screen because he just got blind sighted by a evil little thwimp. Reposition this Thwimp so the player can properly react to its attack.

4. When I avoid the Thwimp on later runs I find this jump tough to make since the ceiling is so low. Raise it a bit so Big Mario can make the jump without ducking. Also we currently have no plans to use the switch palace so leave the switch blocks out of your levels for now.

5. This area is way too cramped especially for big Mario. Widen the area up a bit and also I’d suggest you put the spikes in the ground so you can’t touch their sides.

6. The trapped Dry Bones poses little threat as it usually throws a bone the opposite way. Also there is a little cutoff where FG wall meets the castle brick corners.

Besides these issues the level as a whole feels like it had little effort put into it. I suggest you go back though and try to put more though into your enemy placement and tile placement. Take a look at some original SMW castle levels and see if that can inspire you to create something a little more creative.

Also here are some images that illustrate some of the suggestions I’ve made in this review.

I will say this though, it was the appropriate length (not too long or too short) so good job on that.

While I have the base rom on my portable hard drive, LM is not.
So until I find my laptop, I won't be working on my levels.
I hope you all understand.
Layout by Koopster!

Posted on 2013-06-16 05:00:28 PMLink
Hello again.. I'd like to ask question - is graphically pseudo-tile overlapping allowed in Reassembled-type level?

Posted on 2013-06-20 08:54:15 PMLink
Originally posted by yoshiatom
I would like to make an apology.
The reason I have been posting is because I lost my laptop.

While I have the base rom on my portable hard drive, LM is not.
So until I find my laptop, I won't be working on my levels.
I hope you all understand.

Sorry to hear you lost something so important, I hope you can find it.


Originally posted by natnew
finals are upon me, I'll be slow too.

No problem just work on it when you can.


Originally posted by Pokeymeister80
Hello again.. I'd like to ask question - is graphically pseudo-tile overlapping allowed in Reassembled-type level?

Sorry but I’m not quite sure what you mean by “graphically pseudo-tile overlapping” can you clarify?