Let me just say that it's amazing the hack has even survived this long. It's been since 2011 (!), and I know -- I've been a part of two team hacks that died before they came to fruition.You know me if you know me.

I already got started on the level and actually almost finished it. It's based on the original SMW level “Soda Lake”:

Leaving cutoff since it was in original game, also leaving pits in even though I know that allows for the level to be broken (swim under most of the level).

Publiée le 2014-04-04 09:02:43 PMLien
Yo Snifit, I like the idea of Soda Lake, the only thing I would change: The backgrond color looks like solid FG for some reason (especially in the last screenshot), not sure if you need to lighten or darken the BG :/

Also a little designtrick for Swimming through bottom player:

Place the secret/goodies on the tophalf while blocking off the lowerpart alot. So the player gets punished for skiping while it is still possible to skip for normal exit

Thanks for pointing that out, I made the entire palette in a hurry a didn't realize there was a clash. I fixed up the BG now: 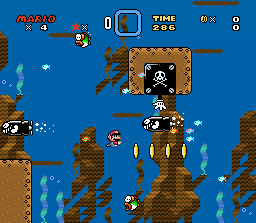 Can you guess the theme? 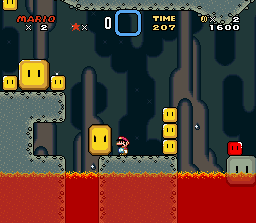 Thanks, and I made new animated tiles to create that effect. I didn’t use layer 3 at all.

It's going to feature some waterfalls, and plenty of jumping fish.

Localisation: A place you don't need to know

Edit: I've applied the patch correctly but when I try to open it in ZSNES or SnesX9, it says there's a bad rom and the checksum failed. Help?
Why are you looking down here?
Dernière modification le 2014-05-21 01:08:55 AM par negativestar54


Originally posted by negativestar54
Edit: I've applied the patch correctly but when I try to open it in ZSNES or SnesX9, it says there's a bad rom and the checksum failed. Help?

Sounds like it wasn't actually patched correctly, try this new base rom patch and see if it works for you.

Localisation: A place you don't need to know

Heavily based on Yoshi's Island.

I plan to make a World 8 level with this when I'm done.

Publiée le 2014-05-27 01:42:07 PMLien
Nice tileset Snifit. The only suggestion I might have is adding one additional color and flower tile so there is some variety.

Publiée le 2014-05-27 04:38:19 PMLien
And brighter colours on that green please, stuff like that looks kinda iffy in solid puke green.Your layout has been removed.

As of now here is a list of stuff still unclaimed:

Sorry progress is slow guys been still been tough for me to find time to work in Lunar Magic. With luck we can finally finish the hack this year.

Hard to believe this started late 2011.

Does somebody knows who could create a boss for us? I mean I'm not sure which person we could ask to help us out: Our hack is promising enough to get someone with ASM knowledge to contribute something.

I am not sure however which person on SMWC would be willing to do so. Any ideas?

For the Overworld, I would like to use some maps from the
Vanilla Annual Contest because they shouldn't be thrown away. What do you think people?

My idea for this level? A "spaceshooter"! I will try to combine some sprites in a vertical level to create a Gradius/Silver Surfer like level. I have to look further into it though, because it might won't work that way well enough!

Edit: Level 1B isn't in the baserom on the mainpage. Is that intentional or a mistake?

Furthermore, the blocklevel(cave level with every enemy blocks) has a infinite 1-Up segment at the end of the level while I tested it
Dernière modification le 2014-07-07 01:25:42 PM par Shog

Publiée le 2014-07-07 07:11:05 PMLien
Could I do the creative room on the final boss stage! I am a elite level maker, just tell me how hard you want me to make it and if you want it to be a puzzle, platform, or some kind of type of section. PM me please!

As much as I’d love for a boss to be created for TCCR there are some technical issues on my side that will prevent it. Basically problems occurred in the rom and I can’t get it to work with sprite tool anymore.


Originally posted by Shog
For the Overworld, I would like to use some maps from the
Vanilla Annual Contest
As for the Overworld it would be nice if any of the authors were willing to let us use some of their maps. However I don’t know much about Overworlds, how would I be able to insert their Overworld into this rom?


Originally posted by Shog
My idea for this level? A "spaceshooter"! I will try to combine some sprites in a vertical level to create a Gradius/Silver Surfer like level.
Your level idea is cool, but how about tweaking it so I uses already inserted sprites. How about making it into a regular autoscroll level that combines the look of Silver Surfer and Gradius sort of like: 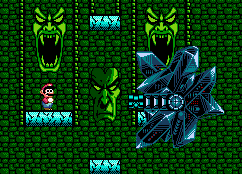 You can utilize all the bullet bill generators to create that feeling that you’re in a shooter. Remember we have one-way bullet shooters inserted (sprite C0 shoots left and sprite C1 shoots right). It’s world 8 so a Silver Surfer reference would be perfect there.

EDIT: Oh and of course I can help you of with graphics if you need it.


Originally posted by Shog
Edit: Level 1B isn't in the baserom on the mainpage.

Don’t worry I still haven’t added a lot of levels to the base rom yet.

Originally posted by Shog
Furthermore, the blocklevel(cave level with every enemy blocks) has a infinite 1-Up segment
Oh I didn’t notice that, where exactly is it? Thanks for all your help.

@superbot12
Yes, and it’s up to you really just make sure it doesn’t need any custom sprites that aren’t already inserted into the rom. Also be aware it’s a room not a level so keep it pretty short.