Hell of Pain - My hack

soooo... from all the (3) YI hacks out here, this one actually feels like the original YI, the way you designed levels is just... outstanding, puzzles in the hack are amazingly done.
I don't know what else to say... I can't think anything bad about it...
well... 5-8 was pretty dissapointing for me at least, everything else:perfect FUCKIN' perfect!

Let's hope my YI hack is the next is the list!

besides, why everyone hate kamek's revenge 2-2? that stage was not hard for me(I gave up on 6-3, stupid level)

No offence, but you must be either absolutely horrible at games or just tired of anything that provides even the slightest challenge. I've 100%'ed all of world 1 now without much difficulty at all (and yes, I know I played YI a bunch back in the day so I should be good at it, but I seriously haven't really touched the game - even to play it - since SMW2+2 is released). All of his secrets are, for the most part, very fairly hidden and the hack itself is very doable.

Shrug. I mean, your loss I guess.

Posted on 2012-02-20 05:05:48 PMLink
Originally posted by Yoshis Fan
The car thing is explained as soon as you need it to complete a stage. Also, you seem to want to have served up everything on a plate. If you instantly know what to do everytime it's boring, ya know?
If there's a new mechanic in play that never had to be used in the original game and isn't intuitive, I don't see how bringing it up is a problem.


Originally posted by Yoshis Fan
Err, yeah, if by "not hard" you mean "easier than the original", what's the point of that?
With a very few exceptions, I have yet to see a ROM hack that isn't at least twice as difficult as the original game.


Originally posted by Yoshis Fan
Hated the stage, too, but now I love how challenging it is. The challenge is what makes a game (for me at least).
Well, I like a good challenge too, but the key word is "good". I will admit that something can be hard but fun (it's not easy to pull off, but it can be done), but it can also be hard for all the wrong reasons. Compare 7-K with 6-K in Donkey Kong Country Returns, or 9-6 with 9-4 in New Super Mario Bros. Wii. All of those levels are difficult bonus stages with no checkpoints, but I like the first one of each pair because it's fun, while I hate the second one because it's just a huge pain in the butt. My opinion, of course.

Yes, yes, but on that point I have to agree with S.N.N.


Originally posted by S.N.N.
No offence, but you must be either absolutely horrible at games or just tired of anything that provides even the slightest challenge. I've 100%'ed all of world 1 now without much difficulty at all (and yes, I know I played YI a bunch back in the day so I should be good at it, but I seriously haven't really touched the game - even to play it - since SMW2+2 is released). All of his secrets are, for the most part, very fairly hidden and the hack itself is very doable.

Shrug. I mean, your loss I guess.

The levels in World 1 are pretty easy, even for people who aren't that familiar with the original YI.

Still, your choice; you decide which games you play so the discussion about opinions on difficulties and gameplay is pretty pointless anyway.
Some people like hard, challenging games, others rather play easy games (for whatever reason).NEW! SMW2 Yoshi's Island is done!
Last update: 2012-12-31
Last edited on 2012-02-20 06:42:52 PM by Yoshis Fan

Posted on 2012-02-20 09:18:56 PMLink
there's on small change I would like to see in your hack the yoshi's for the secret and extra levels are green would it be possible to make them black and white like in the ds version?

Posted on 2012-02-20 10:09:58 PMLink
Spent an hour 100%ing the first half of world 1, and this already seems to be shaping up to be a really good hack. Dear lord am I rusty with the YI engine, though...My YouTube channel
Get the official ASMT resource pack here!

-The secret switch cloud in 1-6 seems a little luck-based in terms of finding it. I could understand if you actually put it in a niche or against a wall or something, but being that it was in a random place that people are most likely to NOT jump at is sort of annoying.
-The flashing egg in 1-7 didn't spawn for me on my first go. Not sure why, considering I'm almost positive you (and your testers) went through this hack thoroughly looking for errors like that.

Working through world 2 now, and obviously loving it so far. It's been a long time since I've been giddy over a hack like this, so kudos for that point alone.

Yeah, I actually thought about moving the cloud but seeing that, by dodging the bats I could get it activated most of the times that didn't seem to be necessary to me, anyway, valid complaint. (Though I remember Golden Yoshi was using a similarly well-hidden cloud in one of his SMW2+2 levels)

Don't know what was going on with the Flashing Egg, it always appeared, when I went through the level. Looking up the level in EggVine, the Flashing Egg first goes to the right, then to left and appears afterwards. My guess is, while it was on the right, you went to the left, so you were too far away for the game to keep it in memory, so it disappeared.NEW! SMW2 Yoshi's Island is done!
Last update: 2012-12-31 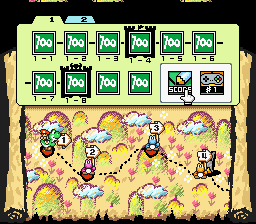 Posted on 2012-02-20 10:39:37 PMLink
Originally posted by Goombakid47
I too am having a bit of trouble patching the game.....I downloaded a Yoshi's Island (original version for SNES) version, a (U) version whatever that means, and it still wont read it. I think it would help if I knew what the (U) meant....

Last seen: 3 hours and 44 minutes ago

Posted on 2012-02-21 01:52:18 AMLink
There's still a rather cheap blind jump near the start of the cave section of 2-3. The arrow points down-left into the pit, but if you jump down there (which is what I expect players would do when seeing that arrow), you pass a narrow hidden passage that you can't enter without the helicopter morph, and die.

I suggest adding some ledges extending from the wall down there, so you can land on the ledge (and see the hidden passage but not enter it) and be able to climb back up. Or at least move the Middle Ring to the start of that room (the part of the level after the Middle Ring isn't that dangerous anyway in my opinion).

Oh, and you can expect imamelia to complain about the difficulty of pretty much every popular hack, generally of some easy early-game level (such as TSRPR's Koopa Lake #1, which is a pretty boring platform ride where the main danger for me is dying from getting overconfident with jumping tricks to pass the time). I've never understood why. If someone's playing a hack of a game in the first place, they probably know the original game pretty well, and should be prepared for something that's still a significant challenge for them (unless they've already completed a much more difficult hack, perhaps).