Old Dark Side of The Kingdom Thread - Mods please close

Pack with all of my level crap. 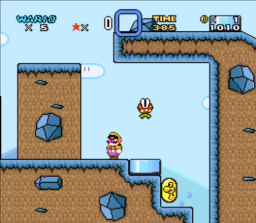 We don't really need to close the claim list to Daisy's Kingdom. If someone wants to make a level, they can go right ahead. I don't think there will be any problems with the feel of it.

What do I do with the level after finishing it though?

Posted on 2012-11-29 03:54:59 AMLink
Originally posted by levelengine
Divine Acropolis (All 5 Dragon Coins PiP)
Does the second half of the level REALLY have to be that long? The first half was a lot shorter.Want progress on 100 Rooms of Enemies: The Nightmare Edition? Go here to see.

Posted on 2012-11-29 12:18:39 PMLink
Oh, yep, just noticed that levelengine gave a name to his level, and the rest of levels don't have a name. BTW, @levelengine, since you're done with your level and you didn't use external resources, just link your IPS here.

Also... his fortress need a custom boss (Reznor is a placeholder, I think). But I don't have any idea for now, or at least any idea that is not related to a Noob Boss variation...

@Lunar Mario 17: You can let the level unnamed for now, but if you have any idea, you can say, too. And since you've made some progress, you could possibly show off some screenies.

Still regarding level names, I think that we don't need to name all unnamed levels right now - it's possible to do it after all levels are completed.

PM me if it doesn't work and please be nitpicky.

All levels are going to be inserted in the base rom I'm going to give out today or tomorrow.

Posted on 2012-11-29 01:21:27 PMLink
@Lunar Mario 17
I'm going to playtest your level now. Completely forgot about it lol, but that's nevermore going to happen because I'm about to date now. Your level is going to be in the next baserom, not in the one I'm releasing right now.

EDIT:
Ok, your level needs much work to be honest... Here are the main things:

There are many, many random blocks around the level which seem just... strange. Best example: This always turning turn block.

The shadows on these grey things are cutoff.

I have always hated munchers on clouds. They don't look good.

Cutoff at the rope edges.

Posted on 2012-11-29 01:23:53 PMLink
Originally posted by mrdeppelman
@Lunar Mario 17
I'm going to playtest your level now. Completely forgot about it lol, but that's nevermore going to happen because I'm about to date now. Your level is going to be in the next baserom, not in the one I'm releasing right now.

Anything else?
- - -
Did you know that Peach hates Mario? I sure did.

Posted on 2012-11-29 04:37:04 PMLink
Hmm... nice. I know that MrDeppel said that he'll be fixing the last version of the level. Bur nevertheless, I'll comment on some things I've detected on the latest version.

> Free random 1up. Eh, things like that should be harder to get.

> Some little clues for collecting these two Yoshi Coins are welcome. Players will never predict invisible coin blocks on their own if there are no indications of such.

> Remember to block slanted pipes. Because this situation is awkward.

> Warping from this place to this place is pretty weird. Not to mention the grassland formation in the former screenie is strange, and... uh, I can recognize original SMW's 103 in the latter screenie. It's also worth to advise that, when entering a pipe, we should exit from a pipe.
So, remember to modify Mario's Actions here >

> Same warp issue here. And I'd insert the Goal Point in the main level. It's kinda unnecessary to have a different sublevel for the goal unless in a few exceptions that I'm not about to cover now. I know we can't have the Swooper outside though, but anyway, this sublevel don't fit well here.

> Blind jump here. Coins to indicate safe path are a must here.

Other than that, acceptable. Very nice for a starter.

Also... the offtopic thing: the koopa hates you!
- - -
Did you know that Peach hates Mario? I sure did.

Why are we using the water version of the W1 BG?

Munchers on top of vines are annoying.

That fence looks pretty ugly next to the bush.

It's a little early for a Green Star Block.

That structure looks weird to me.

I'm not really fond of blue coins. It looks ok with alternating yellow ones though.

Why do you need Mole holes when Moles will already make them there?

Don't use too many clouds. Personal opinion though.

That looks ugly and repetitive.

These are by far the most nitpicky out of any of "removal logs" so far, so feel free to take with a pinch of salt.

In regards to 1-block high pipes,

Also, levelengine, it would be great if you could make an IPS for us to try out. I already have a couple nitpicks

Well here it is. Hope you enjoy playing it yourself.

Posted on 2012-11-30 02:30:57 AMLink
Good Lord man, you forgot about the players. I can barely play this! Don't get me wrong, the level looks great and the design philosophies are decent, but the difficulty is through the roof, back through the building and through the same roof hole again. I must have used around a hundred savestates (no, seriously).

First, pretty much the entire first part was near impossible with the constant Bullet Bills.

This part was near impossible. Too tight.

The BG palette needs to be worked on.

This jump is near impossible to make if you don't hit the block at it's right or left peak.

Ugh, this Chuck was terrible.

And this jump was pretty much unfair. Not shown: Hammer Bro. right above it all, Paragoomba that you have to wait for, Swooper Bat that swoops right into you on your way to the left, and finally a shell coming out of nowhere with no warning.

First, Item Babysitting sucks in general, but this section with block wide jumps and low obstacles was just insane. Also, the wood palette needs to be worked on, it shines.

Alright, do some serious fixing up and toning down on the difficulty, and this should be golden. I hope I'm not the only one that feels like this. Also, it's worth noting that you put a ton of different sprites in your level. While this isn't too bad, some people consider this to be bad. I'm not sure what the leaders would say about that.

Posted on 2012-11-30 07:34:47 AMLink
@Egadd
Meh, you aren't the biggest skiller are you? I don't think the level is too hard for world 5. Maybe we can calm down the difficulty a little bit. Also, no problem about many different sprites.
EDIT: Idea, the level is very long and hard, why don't we use it as Heaven Valley Castle?