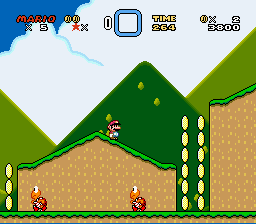 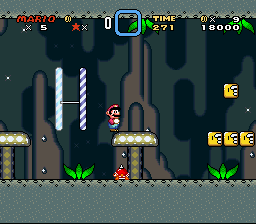 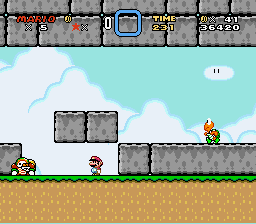 Here is a userbar made by silver scarlet here is the code to get it.

Posted on 2012-12-18 06:38:15 PMLink
@Screen One: Probably the best screen show so far. It's slightly boring though. I'd recommend you put a Goomba on both of the ledges, and maybe get rid of some of the coins.

@Three: Again, I'd recommend you add more enemies, and make it more uneven and less predictable. Maybe you should put in other paths as well?

That's all for now. I can't wait to see more of this! Posted on 2012-12-18 07:40:56 PMLink
Looks pretty good. If you can mix tilesets, you're obviously experienced. As BlackMageMario said, it just needs more complex terrain and more enemies.
Screen 1 could benefit from jumping Koopas. Screen 2 is good, but needs more enemies. Screen 3--I don't like the floating square blocks, but that's just my opinion. And vary up the shape of the floor and ceiling more, and add a few more decorations."(Z->)90° - (E-N²W)90°t=1" 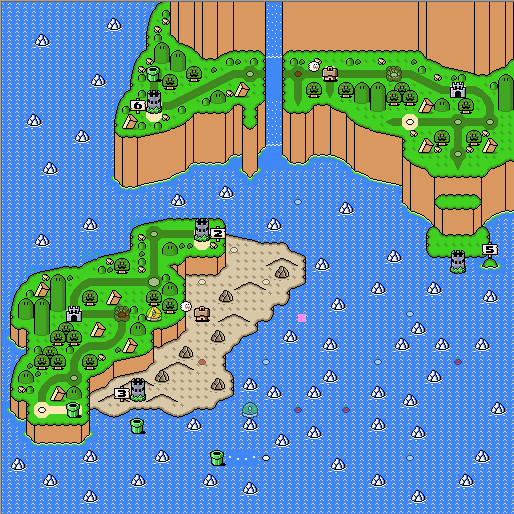 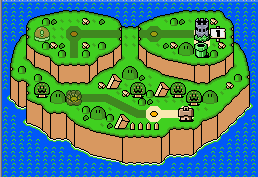 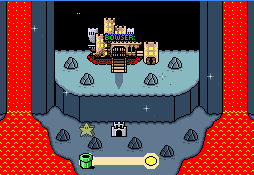 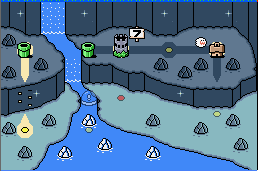 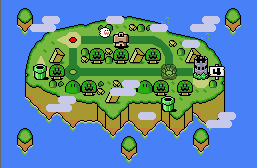 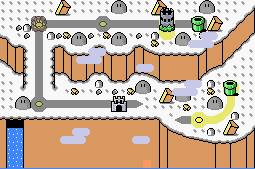 Posted on 2012-12-19 02:09:27 PMLink
@Screen 1: Not too bad as far as looks, though on design, I do think there's too many coins, even placed in such a way that doesn't require you to use the top platform. The second Red Koopa doesn't add anything in particular when the platform is low enough that any simple jump could reach it. Maybe you could have Red Koopas on the elevated ledges and place the coins above them rather than between the gaps, and just use a Goomba for the bottom. Challenge the player to work a little harder for the reward, yeah? =D

@Screen 2: Eh, the mushroom palette isn't too good.. the stem and the top could both use less contrast between the shades. I also think you should shift the set of [?] blocks up one tile.

@Screen 3: I agree, it should be a little more uneven and it would look better if the castle bricks appeared to be held up by something (canvas, other castle blocks, pillars etc.) but whether or not it needs more enemies depends on the context. I think what you have now for enemies suffices for what kind of design it is and how early it is in the game.

@Map 2: I like what you did with the slopes in the sand to create dunes, but I think the beach would look better with a few rocks and if the shorelines were less straight on the north and south ends. No complaints about the grassy part, it looks good.

Lastly, what does the title relate to in the game? You didn't tell us any plot. Unless it's a
secret
:z
Just look above you...
If it's something that can be stopped, then just try to stop it! 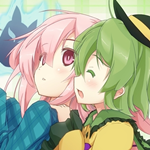 Looking really nice. The decoration is very nice, and it's very much not flat and looks pretty good. Only thing is that I'd change the palette, to make it look different from the other grasslands in the rest of the game. Differences like that would be cool, no? 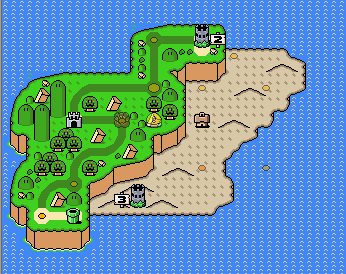 Again, very nice (I really like the winding paths you've made, they look really nice), and I do like the sand hill things you've made on the beech. However, I would make it lest stright, include more decoration, and maybe make it smaller. Right now, it's much, much bigger then the actual island, which doesn't look right. Other then that, it's really, really great!

(I also can't wait to find out more about the plot).

Well, anyway, I'm often checking this project, and I'll be waiting for more stuff from you. Looking forward, and cheers! 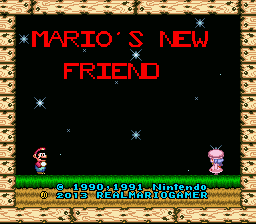 The letters are too close together, and it seems very blocky. Try smoothing out the N and R.

Last seen: 5 months and 8 days ago 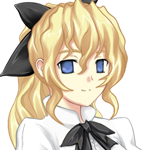 Posted on 2013-01-13 01:20:39 AMLink
It doesn't really stand out as too spectacular. As others have said, the mix of jagged and smooth edges doesn't really appeal to my eyes, and I think I'd recommend centering the title text on the screen.

Moreover, there seems to be a clash in sprite styles. Mario's style of drawing does not match that of the character on the right, and the environment unfortunately doesn't look too interesting.

It could use some work, but it's a good start.
How To Design a Good Overworld 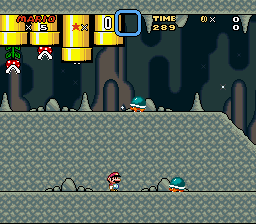 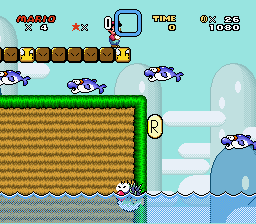 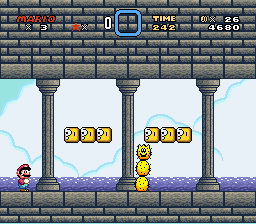 I hope that theres plenty of Remilia in your hack.
‽⁸NAIRB 武雷晏 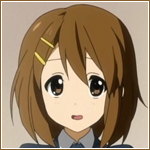 From: Come check out my profile!

• On one of the World 2 screens. What does 'R' stand for on the yoshi coin?
• Smooth out the title screen letters a tad? Like snoeshoe said, R and N.

I barely have time to myself anymore, so I won't be very active on here anymore. I'm sorry.

Posted on 2013-04-02 10:13:32 AMLink
Welp, you should avoid bumping in threads, since you did some questions for RealMarioGamer I'll keep this open, probably he want to answer the questions.