Munchy's Big Day - a million eyeballs fall from the 'bove

"Every year or so, a muncher will be chosen to become a legendary Floating Muncher, a divine creature that watches over all the other munchers to ensure that they do not damage a hack's quality by stacking onto each other. However, one does not just ascend to the Highest Muncher Council just like that. That would be too easy, so the lucky muncher must prove its skill, bravery and munchiness by venturing to a far-off land many miles away from the spawning pits that it was born in.

You play as Munchy the Muncher (how original), who is the next to go to this mysterious land. The journey will be difficult, and few have ever made it alive, but this time, it will be different...yes?

Munchy's Big Day is a hack that I'm making. You can tell because it says my username on the title screen. 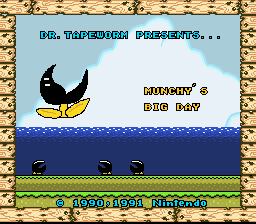 Anyways, this hack mixes vanilla and chocolate graphics together into one strange choconilla mess. It won't be anything too special, just an ordinary SMW hack that happens to star a muncher. 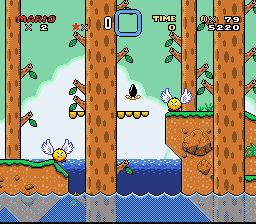 HUD is unchanged for now. It should refer to our chompy companion, not Mario. Also note the lemon Goombas. We'll call these guys "lemans" because puns are funny. 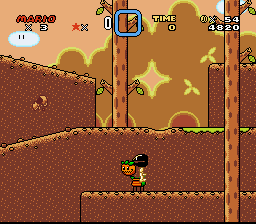 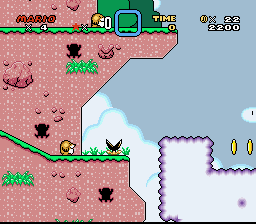 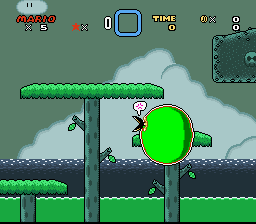 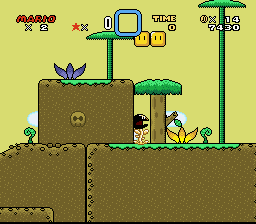 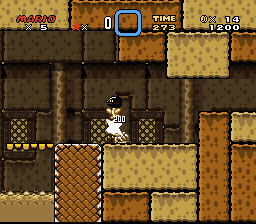 Other assorted screenshots. The swamps need a large filler decoration for the ground and the castle is just unfinished, and full of boiling brownish goop which is totally not made of people nope not at all

The player graphics aren't complete and will be modified to make them less bad and more good.

Stay tuned for more updates as time goes on.

(All instances of munchers as a hazard have been replaced with spooky spikes. Ooooo!)

Man, this is an awesome hack. I like the "muncher player" idea.

Keep it up, Tapeworm!

As for the screens, they're very cool, I like the palettes, tilesets, level design seems nice too, I'll be waiting for updates, I get interessed in your hack now, so keep it up. 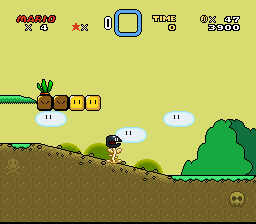 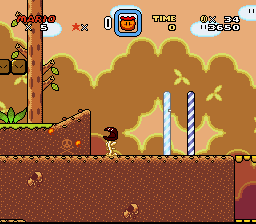 Slightly updated graphics for Munchy. His/her/whatever head is now colored instead of pure black to show the difference between the big and fire forms. You can also see the Happy Fertilizer (mushroom) and Spicy Herb (fire flower) powerups. 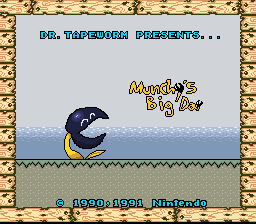 Also, a better version of the title screen. Still unfinished, but at least it's not as bad as the old one.

Posted on 2013-05-11 07:20:54 PMLink
From what I can see, you are doing pretty good. The muncher idea is rather nice. The palettes look rather nice, the level design doesn't look bad at all.YOUR layout has been removed. 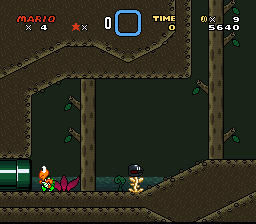 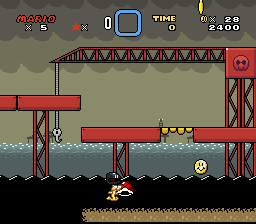 This hack is back; here, have some screenshots.

(there were goombas and a sumo bro in the second screenshot but they went back to their home planet.)

Posted on 2013-11-23 09:40:00 AMLink
Hey, seems like a nice and interesting concept! I'm not sure if this is the first "real" hack having a Muncher as a player, but you've executed the idea pretty well here! I adore the "big" version of Munchy, it's somewhat pleasant to see a Muncher with eyes, I think that's totally new.

About the levels: everything looks great so far! Choconilla is quite a trend nowadays, but it goes well with the character. I like the palettes and extra graphics you used. I can't really comment about the level design, but it doesn't seem like it'll be boring.

Only one little nitpick: on the last screenshot, I guess it's oil, but it's a bit weird with the white outline.. how about giving the oil Map16 priority so it'll "hide" Munchy? I think it would be a neat little effect. Just a thought, though. Nice work so far!

Posted on 2013-11-23 10:35:38 AMLink
Oh it seems a nice hack man and something quite different! The graphics combo, and Munchy I like the gfx of the player! Awesome work!

Change the original enemies gfx If the story isn't related with Bowser's army...well nothing major that!

Posted on 2013-11-23 04:05:38 PMLink
Nice mix of vanilla and choconilla resources, man! I think I'll play this because it looks pretty interesting. 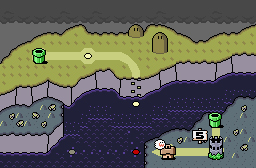 Possible design for the World 5 submap. I don't really like how it turned out, though, so I'll probably redo it at some point. But look! Purple slime! 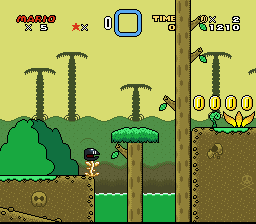 I am terrible at making backgrounds.

Posted on 2013-11-28 03:41:41 PMLink
When you mentioned floating munchers, I thought it was an excuse. Lol.
Layout base code by Tahixham
pm me if you want to know what my location stands for.
No of users who have asked me: 3

Posted on 2013-11-30 01:33:30 AMLink
W1-S Cookie Coast (first room)
A small preview of the first secret level in the hack. Throw Blocks and pirate-y Koopa reskins are everywhere in this one! Where does the pipe at the end go? Who knows?

The sky is the same one used in that oil level screenshot, but with a much less ominous palette! The red X sprites are Buster Beetles, and there is a layer 3 tide as well. 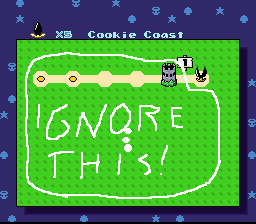 Posted on 2013-12-03 08:41:55 PMLink
Originally posted by Dr. Tapeworm
W1-S Cookie Coast (first room)
A small preview of the first secret level in the hack. Throw Blocks and pirate-y Koopa reskins are everywhere in this one! Where does the pipe at the end go? Who knows?

The sky is the same one used in that oil level screenshot, but with a much less ominous palette! The red X sprites are Buster Beetles, and there is a layer 3 tide as well.

This hack is looking nice so far! I normally don't like "choconilla" hacks, but this one looks pretty unique, as it really has its own style (mostly). I like the idea to have a muncher as a player. Also, the ow sprite for him looks cute :3

Anyways, your laout is fine, except the light blue stuff should be couloured differently. Maybe try to light up the rest a tiny bit and darken the decorations which are currently light blue.

The level looks quite good from what I can tell. You don't seem to have that typical mainstream leveldesign you'd except from this hack graphicwise, so that's very good! :3 Keep it up man! 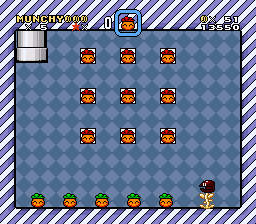 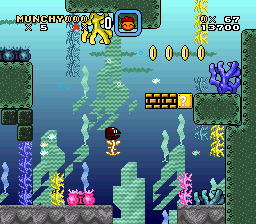 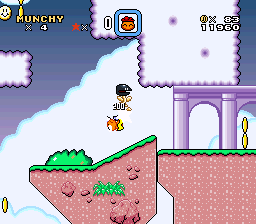 Also this, relevant to the hack but probably won't be used in it: 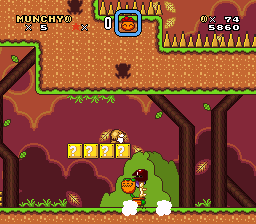 The upper route is for Yoshi only. However, you only get Yoshi early in the level, so if you lost him before this section, tough luck!

Posted on 2014-09-21 01:29:21 PMLink
Post a screenshot of munchy finishing the level!Your Layout Are Taking Vacations