Posted on 2013-05-17 05:10:02 PMLink
I loved the concept in this level. It was creative, interesting, and at times challenging. However, at times I found the level a bit too demanding (I'll explain those later)Overall I'd say the level is pretty hard in terms of difficulty (maybe that's because of my undying hatred for the metroid donut blastersyea that's what I'm calling them)

Graphics: Good, although, if I'm not mistaken you have an unused NPC graphic. Did I miss it in the level or was the NPC the graphics were supposed to replace removed (npc-30,npc-30m btw).


Originally posted by LunarLemonde (YouTube)
Wow, this is very creative ! I didn't know you could do that in SMBX.
The gimmick seems to be thrusted into the player's face, though. Perhaps make a small introductory section before the actual level, explaining how this stuff works ?


I agree. The player should be given a bit of leeway when the gimmick is first introduced. As of now the player picks up the first pipe with the first donut blaster shot heading straight towards them. I suggest getting rid of the first one so the player has time to figure out what's going on.

When I first got here, I had no clue that piranha plants would be coming out of those pipes. Thus, I ran foward and lost a life by sheer suprise. Give some indication that something’s going to come out because first timers will easily run into it.

This spot, I just found annoying. I need to get the bomb up the slope, but most of the time the donut blaster ends up hitting the bomb before the bomb takes out the block I need to hit. Also, while this didn’t exactly cause any deaths, I was forced down the slope many times because the game considered me to be on the slope. I was only trying to pick up a bomb which I need to press down to do.

I'd suggest changing the terrain thier or adding an extra block (indicated by the magic red square) so the player is less likely to worry about slipping off and thus creating a simpler experience.

In the left screen, I really believe you should replace the glass with a row of bomb-able blocks. The fact you have to wait a good bit for the bomb to explode unnecessarily stretches the playtime.

However, this works fine in the second photo because I can just chuck bombs at the glass (causing them to explode once they meet the glass) and not have to sit around and wait for them to explode while dodging two donut blasters.

Probably just my impatience, but I found this section annyoing mostly due to timing the jump with the donut blaster, and that piranha plant coming down from the waterfall.

Originally posted by NoelYoshi from "Your Level and You: Submitting, getting feedback, etc."
...uses the star exits for your level

Yours uses the SMB3 roulette exit. A simple swap to the SMB3 Star NPC should fix it.

Seriously, this level was good, but I think it needs a few fixes in order to be even better. I hope this helps. 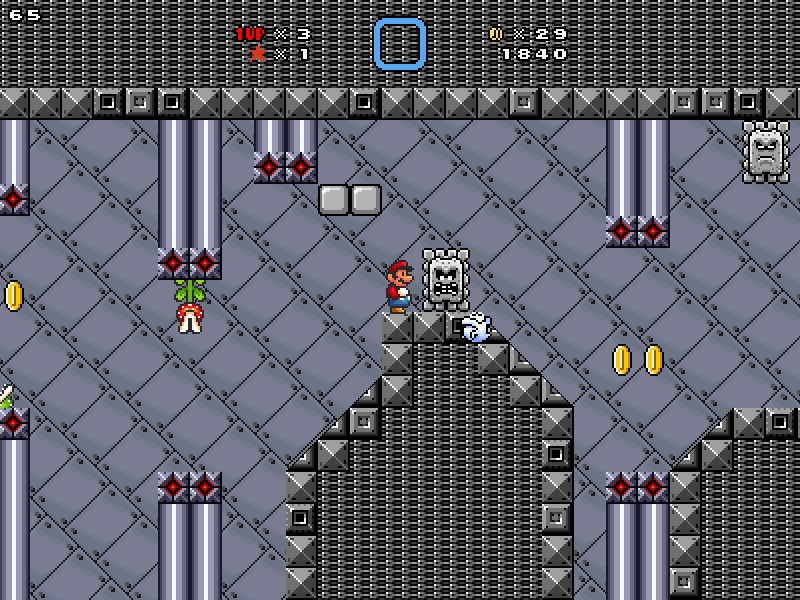 -The placement of this one Thwomp is really annoying. I suggest removing it, because it's pretty hard to get the powerup (mainly if it's a mushroom). 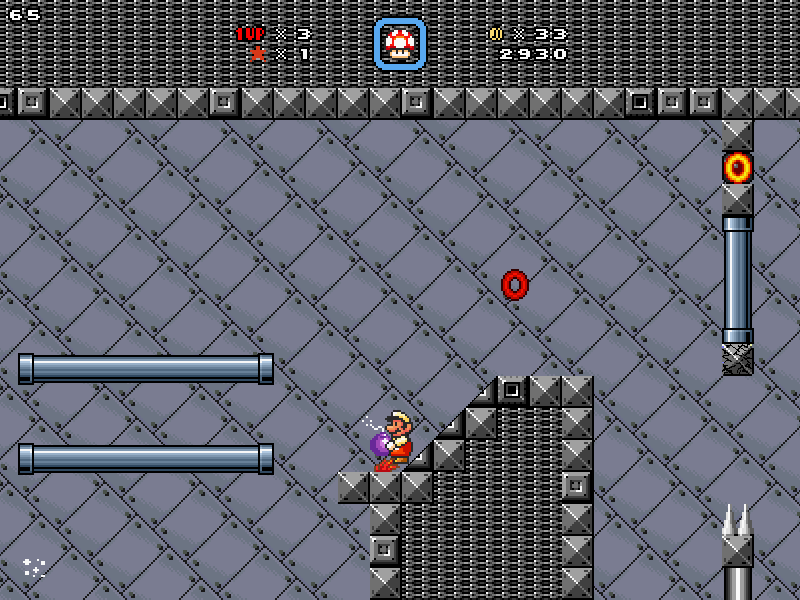 -Maybe it's just my horrible playing skills, but I still find pretty hard to get this bomb without sliding to my death. Adding another block here would be nice. 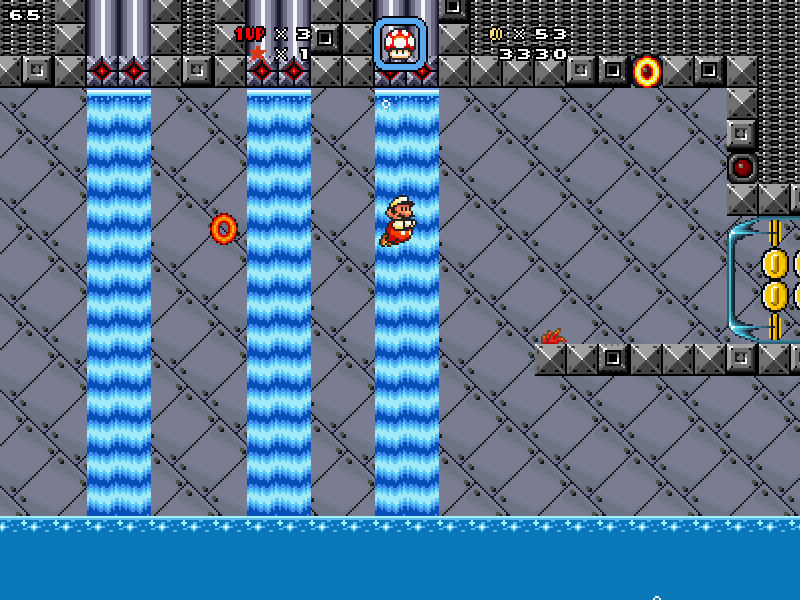 -It was very annoying to get to this ledge without being hurt, mostly because of the metroid donut blasters here. Maybe adding more blocks would fix that.

-Now a more serious bug: If I try throwing the 'pipes' while running, I'll get pushed forward, almost always leading to my death. I didn't consider it a major error because I'm not sure if it's fixable, but I'm mentioning it anyway.

Otherwise this was a pretty neat level, it was very creative and challenging. It would be a awesome Mid-Late level, in my opinion. (Maybe a fortress/castle?)
Last edited on 2013-07-19 11:55:01 PM by Aeon