I'm hyped up for the best buy stuff, but honestly I'm really only going because of SSBU. I don't and probably won't have a U for a long time, so this will be the only time I play it until one of my friends picks up a copy.

Let's run through this last week.

Sakurai shed some light on the Fire Bar. It works as a blunt weapon, and it loses a fireball worth of range every time it is swung. The Beam Sword will also have a new graduated color scheme.

Balloon Fight! Revealed during the direct, this stage will have wrap-around edges and a retro feel. The fish will be making its return after being part of the stage Summit.

Is Waddle Dee playable? All we know is that you can't eat him.

Aesthetics. A new pose for ZSS when using the paralyzer and a rainbow trail for Yoshi's eggs.

Mega Man's final smash, with the identities of the alternate versions finally confirmed.

From: Location is subjective 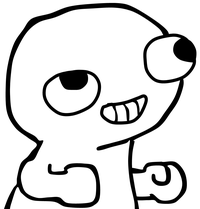 You can knock down the lights in the Boxing Ring stage.

You can pick up Met and Octorock while they're ducking.

Wonder Red from the Wonderful 101, confirmed as a trophy. Sakurai also says that some of the other Wonderful Ones will have a trophy as well.

Orne from Kid Icarus: Uprising, appears in Smash Run... I think. Sakurai also says that it's more powerful than the Ultimate Chimera from the last game.

The Super Leaf from the Mario series is an item, but we already knew about it thanks to those 250+ screenshots released after the SSB4 Direct. (also dat cliping on Marth)

Orne from Kid Icarus: Uprising, appear in Smash Run... I think. Sakurai also says that it's more powerful than the Ultimate Chimera from the last game.

Wait, the decay timer for the speed decrease after being hit will be infinite? As in, you get hit and will never ever slow down, so if you happen to get stuck between two walls you'll never get out, ever?Let's milk Sunny Milk. Then she'll have enough money to fund Sunny Milk Real Estate.
Everypony's digging with a shovel

Miivere post.
Bullet Bill is a new item. If you pick it up you'll turn into the Bullet Bill.

The Dragoon from Brawl is back! It's in stereoscopic 3D on the 3DS version.

Here's a pic of the Dragoon itself.
Miiverse post.

Charizard's new side special move is now Flare Blitz. You'll take recoil damage if you make contact with something. Sakurai also says Charizards's down special is now Rock Smash, which was his side special in Brawl.

Layout by LDA during C3.

I think it's very most likely going to be a Giga Bowser-type transformation.

I think the only things that Charizard's Final Smash will do is temporally change its model and increase the damage, speed, knockback, and maybe range of its attacks. That's it. I think everything else is going to be the same as normal Charizard, including weight, height, knockback resistance, number of jumps, height of jumps, and walking, running, and air speeds.

To sum it all up, I going to compare Mega Charizard X to a nerfed version of Project M's Giga Bowser.

I think this picture might show what Mega Charizard X might look and play like compared to normal Charizard. (This picture was taken in Project M, but I don't think Super Smash Bros. 4 will be too different. (This Mega Charizard X skin was from Brawl Vault.))

What I'm trying to say is, if Charizard's Final Smash is a Giga Bowser-type transformation, I don't think Charizard is going to change as much as Bowser when he transforms into Giga Bowser. You know, the changes to attacks won't be as drastic, Charizard's size, weight, and all of those other attributes won't change as drastically as Bowser to Giga Bowser. Do you understand what I'm trying to say? It is kind of hard for me to explain my thoughts on this topic, but I explained it the best I can.

Then again, Mega Charizard X is still a Final Smash, so we'll see.
Also, what about Mega Charizard Y? It would make sense to have both Mega Evolutions in the game, like maybe randomly switching forms or pressing a button sequence to select a form every time the Final Smash is used. I personally like Mega Charizard Y better, both on looks and what it can be used for in Pokémon X and Y.

Also, something that's concerning me is, what happened to Sakurai's Miiverse posts? Is he not posting to Miiverse anymore? If I go to Picture of the Day on the Super Smash Bros. 4 website, there's just a picture and no Miiverse link.

Posted on 2014-05-15 08:36:33 PMLink
Originally posted by DPBOX
Also, something that's concerning me is, what happened to Sakurai's Miiverse posts? Is he not posting to Miiverse anymore? If I go to Picture of the Day on the Super Smash Bros. 4 website, there's just a picture and no Miiverse link.

You have to go to Sakurai's Miiverse profile right here: https://miiverse.nintendo.net/users/SakuraiMasahiroA I don't know why the staff is not linking the Miiverse pics on the website. I will start posting links to the Miiverse pics whenever I make a post about updates.

"Pic of the day. You can choose to play as the girl villager too!! How lovely."

Posted on 2014-05-17 05:49:52 AMLink
I like the idea, but couldn't they have gotten cooler clothes for any of the characters? sheesh. Turnip dress girl is the best looking one.

Last seen: 30 minutes and 55 seconds ago

Posted on 2014-05-17 06:13:09 AMLink
Originally posted by LaughingLuigi
Hopefully other characters will have more than one alternate costume.
I have the idea, that Mario and Luigi should have a doctor costume (i.e. Dr. Mario and Dr. Luigi but with the same abilities) and Samus Power Suit (in this case it's about every suit she's wearing like the Varia or Gravity Suit, not just the normal power suit) should also use different models and not just using a different colour (examples are the Fusion and the Dark Suit, both suits uses a different model and not just a different colour like the Gravity Suit).
Last edited on 2014-06-25 04:13:16 AM by MarioFanGamer

"Pic of the day. The leg and arm positions of some characters will automatically be mirrored when facing left or right. Mario, for example, will have his chest shown in the foreground regardless of whether he's facing right or left. This was quite a tedious task, but thanks to it we can show the best features of each character even better."

"Here's another example: in the previous games, you saw the back of Kirby's head when facing left. Now Kirby looks great from any angle."

Some characters will automatically be mirrored when facing left or right. These posts also confirms that alternate color swaps are back.

Also, I will only be posting notable updates.

Layout by LDA during C3.

"Pic of the day. In previous games in the series, if you chose the red team in a team battle, your Mario would have been red. But now you can choose any color you want! The color outlining the characters will show their team affiliation."

Very nice update! You can now choose any color you want in team battles. I wonder if this will be in the Wii U version since there are on outlines on the characters.

I think it's very possible we won't get character reveal this month since E3 is very soon. The most likely reason why we didn't get a character in March was because of the SSB4 Direct. I doubt Sakurai will reveal a character when Mario Kart 8 get released in Japan.


Originally posted by Lightvayne
I would love to see Dry Bowser as one of the available skins.

So, it's been confirmed that Super Smash Bros. for Wii U will use NFC. I hope it's not for characters because I don't want to buy a bunch a figures just to unlock characters. "Pic of the day. Ike, the swordsman of magnificent strength, joins the battle!! Strike your foes down with his powerful smash attacks."

"For this game, Ike's design is based on the hero that appears in Fire Emblem: Radiant Dawn. His sword deals heavy damage in Smash Bros., so this design suits him very well! Rest assured, he can use Aether as well."

Dry Bowser sounds like an awesome skin idea, and his fire breathing should be blue

I'm betting there will be a third fire emblem character from Awakening. I hope it's the default look for Robin, the customizable character. He/She was able to weild both swords and tomes in the first chapter, that would be pretty badass to see in smash. It could also tie in with the whole genderswap thing sakurai is getting at.

Chrom would make more sense seeing as he was more important than even your character most of the game, but I just don't want another blue-haired swordsman, I think his design is already similar to marth's as it is.

Posted on 2014-05-23 06:12:20 PMLink
Originally posted by DDDchu
Also I wanted Zoroark to replace Lucario. They'd both work pretty similar.
Not really. Just because it's gen 5's Lucario analogue doesn't mean they're practically the same. I can't see Zoroark ever playing like Lucario, it doesn't fit. Zoroark would have to be about trickery and fakeouts, and Lucario's just in-your-face bashing.


also i am disappointed that ike was revealed