Posted on 2013-08-20 09:41:42 PMLink
I am a little dissapointed by 2 of the new characters. I am not dissapointed that much by the villager, but who the crap would want to see the trainer from Wii fit in super smash bros.

For new characters, I would want to see all of the characters from pikmin 3, Ghirahim from skyward sword, Claus from mother 3, Waluigi from the Mario series, Rundas from metroid prime 3, and some other megaman characters such as proto man and bass.

I would also be mad if they add any more random pokemon such as jigglypuff, if you are going to add a pokemon to the roster, at least make it a powerful or popular pokemon.Yes, I know, I don't have an avatar, I can't find any damn pictures that are small enough >:(

From: The Ministry of Ungentlemanly Warfare

Posted on 2013-08-21 03:38:51 AMLink
Originally posted by norris4president
but who the crap would want to see the trainer from Wii fit in super smash bros.
The thing about the Smash franchise is that it always brings something fresh to the table. If your first reaction to the new characters was not, "Haha, what!" followed by a bemused, "Man, that's cool," then you clearly don't get the joke.

Melee gave us Mr. Game & Watch, and Brawl brought R.O.B., both arguably "console characters" more than franchise mascots—corresponding to the Game & Watch handhelds and the NES mascot, respectively—so why should they stop now and not bring in another? Yes, the darling Miss Trainer is totally a console character: Wii Fit is part of the Wii ___ series (Sports, Play, Music,
Party (who even played Wii Party, honestly)
) which is indisputably a console-brand franchise made to usher in the shiny white slab we call the Wii. Wii Noun was pretty popular, it turns out, and also happened to have an adaptable character, so it wasn't shunted down to stage-homage status (c.f. Pictochat and Electroplankton).

The other thing she has going for her is the quirkiness of such a weird character joining the battle. Brawl's Pokemon Trainer was literally a 3-in-1 discount package, but it was neat to have that sort of Pokemon battle dynamic. A more technical (and less obvious) example would have to be the "masochistic battler" trope that was Pichu in Melee. (I hesitate to use Smash 64 examples because the roster's small enough to call basically everything a "quirk", but whatever: Fox's down special, the Reflector.)

And honestly, everyone who has beef with the choices that were made for Kerfuffle should probably help themselves to a slice of humble pie. Smash 4, in case it isn't obvious, is the fourth design iteration of the Smash Brothers series, and it's not yet big enough of an IP to be running out of ideas*, so it's reasonable to assume HAL knows what it's doing at this point. I dare you to be let down by the "Brawl 2: 3DS Boogaloo" experience when it comes out.

* Look at Super Mario Galaxy, Twilight Princess, Metroid Prime 2, and Pokemon D/P, just off the top of my head. These are the clear points after which the franchises are all drawn way too thin. They're now beyond expired, we're talking comatose and on life support. Cry about it.

we are all 😎 but some are more 😎 than others

Posted on 2013-08-26 03:09:50 AMLink
I hope discussing the stages isn't too offtopic, 'cause I've identified a number of stages from the screenshots. I figured it would be lame to make a second topic about SBB4.

There is another stage I can't identify, but it actually reminds me of Xenoblade Chronicles.

Uh, I vote that Shulk from Xenoblade will probably be a character in the game, based on that. Also, for a Fire Emblem Awakening character my money is on the Avatar. They would have their sword as basic attacks and magic as special attacks.

Posted on 2013-08-26 03:51:11 AMLink
Originally posted by phenolatukas
There is another stage I can't identify, but it actually reminds me of Xenoblade Chronicles

If you mean the one revealed last week then it's the pyrosphere, from Other M, where Samuses PTSD is triggered.

There is also a minecraft stage.


Quote
Some kind of NSBMU Stage
This one? It's actually a NSMB2 stage for the 3DS version, probably autoscrolls too, like the brawl one. There is also a 3D Land stage shown in the trailers, where spiked pillars destroy the platforms.

Also, the NSMB2 stage is different to the NSMBU stage. I guess I missed that was well.

Also, the NSMB2 stage is different to the NSMBU stage. I guess I missed that was well.

Pretty sure you're just thinking of something else. And I'm sure as hell there isnt a NSMBU stage, or at least not that theyve revealed.

Those are all the stages revealed so far. Also, the Pikmin stage based on Pikmin 3 was also revealed along with Olimar last month.

Posted on 2013-08-27 11:01:46 PMLink
Originally posted by phenolatukas
I hope discussing the stages isn't too offtopic, 'cause I've identified a number of stages from the screenshots. I figured it would be lame to make a second topic about SBB4.

(This is now the official "Everything SSBU/SSB3DS" thread.)

Posted on 2013-08-28 11:56:09 AMLink
The Pilotwings stage is Wuhu Island, specifically the one from Pilotwings Resort. Also, this page is helpful. I haven't seen any Xenoblade or NSMB stages yet though.

She retains her neutral B. Suck it, toadfags. Waluigi is still a bad character.

There is something about her face that makes her look weird in the official artwork. I actually never noticed in the past games that she attacked with her crown in that aerial move so neat

Yeah, I'll agree that her face looks really weird. I think her eyes have way too much focus drawn to them in comparison to her other facial elements.

From: IN, Fort wayne

Posted on 2013-09-21 08:56:46 PMLink
Originally posted by Bluekirby22
How about protoman since megamans in the game?
100% disagree with this suggestion. I'm all for third party characters but there's no need to go overboard. Adding Protoman would just open the floodgates for loads of other trivial characters to join the game. If there's going to be any more third party characters, I'd much rather they went to worthy characters like Sonic, or Quote.
SMWC's official dentist since 2011.

Posted on 2013-09-21 09:55:40 PMLink
Originally posted by MVS
100% disagree with this suggestion. I'm all for third party characters but there's no need to go overboard. Adding Protoman would just open the floodgates for loads of other trivial characters to join the game. If there's going to be any more third party characters, I'd much rather they went to worthy characters like Sonic, or Quote.
I agree with this disagreement. It's likely that this would create a situation similar to melee where you had a ton of characters, but a lot of them were just doubles of each other. Dr. Mario was basically just a resprite of Mario. They fixed that with brawl, and I'm pretty sure it was very conscious, so I doubt they'll introduce that again. 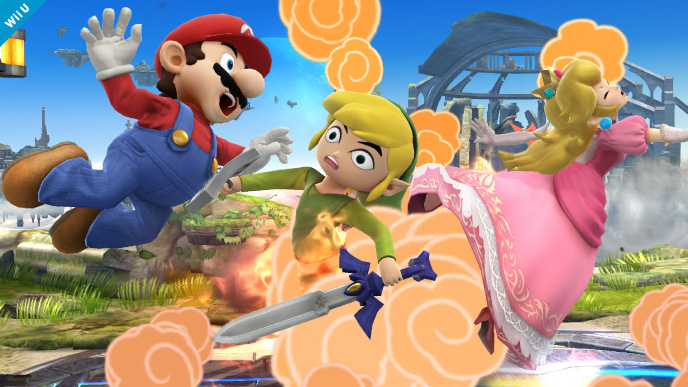 Though something about his face... looks a little off. I thought this with Peach too, what is going on?